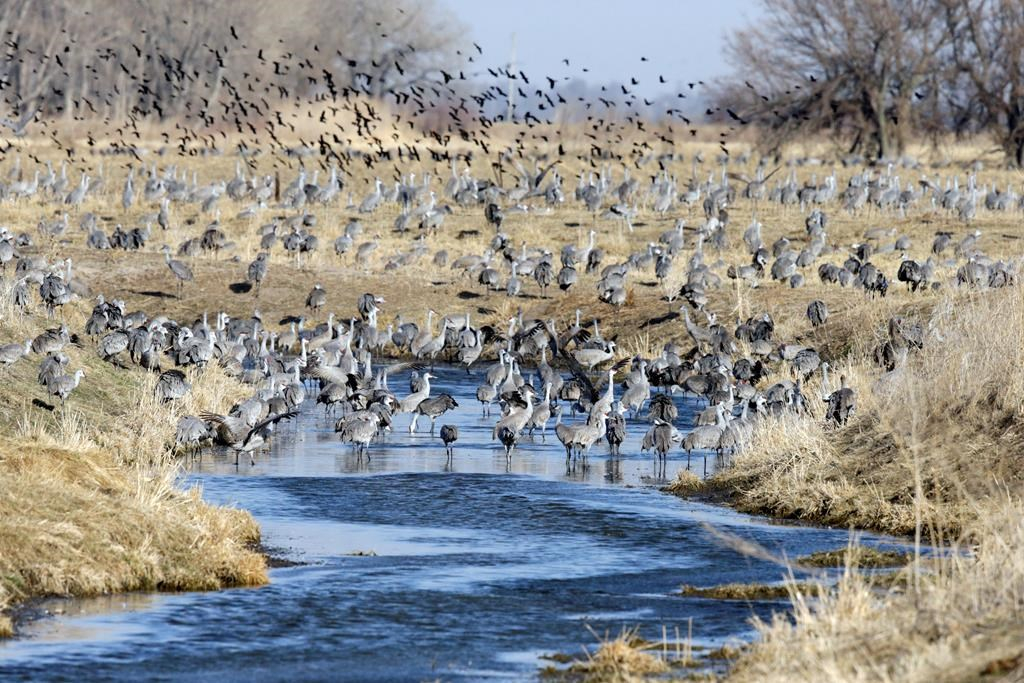 A flock of birds fly over sandhill cranes in a pond near Newark, Neb., on Thursday, March 15, 2018. File photo by The Associated Press/Nati Harnik
Previous story
Next story

Climate change threatens extinction for two-thirds of bird species across North America, including almost all of those filling the forests and tundra of northern Canada, says an extensive report.

"More than we thought are vulnerable," said Jeff Wells of the Audubon Society, which crunched 140 million records from 70 data sources on 604 different species for the study released Thursday.

"It's yet another of these wake-up calls."

The study mapped information onto projections of how climate change will alter the habitats on which birds depend. If global average temperatures go up by three degrees — which is what is expected under the measures of the Paris climate agreement — the results are dire.

Audubon concludes that 389 bird species, or 64 per cent, would be at least moderately threatened with extinction by 2100.

The news for Canada is much worse.

All 16 Arctic species would be at high risk, including iconic birds such as the snowy owl and the Arctic tern. So would nearly all — 98 per cent — of the species that perch in the boreal forest, which stretches across the northern reaches of almost every Canadian province. They would include everything from tiny songbirds to big raptors.

Some birds would be able to adapt by following their preferred habitat north as the continent warms. Crows and magpies are already appearing in northern latitudes where before they were rarely seen.

The report says some places could even see an increase of bird species, although at lower numbers. More species could end up breeding in the tundra, and much of the rest of Canada could see an increased variety of birds fleeing southern habitats that had become too warm.

Northern birds would have nowhere left to go, said Wells.

"There's not that much space for them to move into. There's also the issue of whether the kinds of forest and wetland habitat they prefer can even track northward."

The threats described by the Audubon Society may already be taking effect. Two recent studies have found numbers for most bird species are dramatically dropping. One report concluded overall numbers have dropped by three billion since 1970 — about a 30 per cent drop.

But the threats are not inevitable, says the most-recent study.

"Protecting large areas of northern habitat is going to be part of the most crucial things we can do to maintain large, resilient populations of birds and other wildlife," Wells said.

Scientists say that, in addition to eating bugs and pollinating plants, birds are an important indicator species.

"Birds are living off the same Earth that we are," Wells said. "If the birds are being impacted this way, the humans are going to be impacted in the same way."

By The Canadian Press | News, Politics | September 21st 2019
State Of The Animal

But Trump and other climate

But Trump and other climate deniers don't give a s##t. I love birds. Especially their songs. So beautiful. So inspiring. And they survived the dinosaur extinction. Yet birds now face extinction. What can we we do to extinct the climate deniers? To eliminate the influence of the Koch brothers would be my greatest achievement.