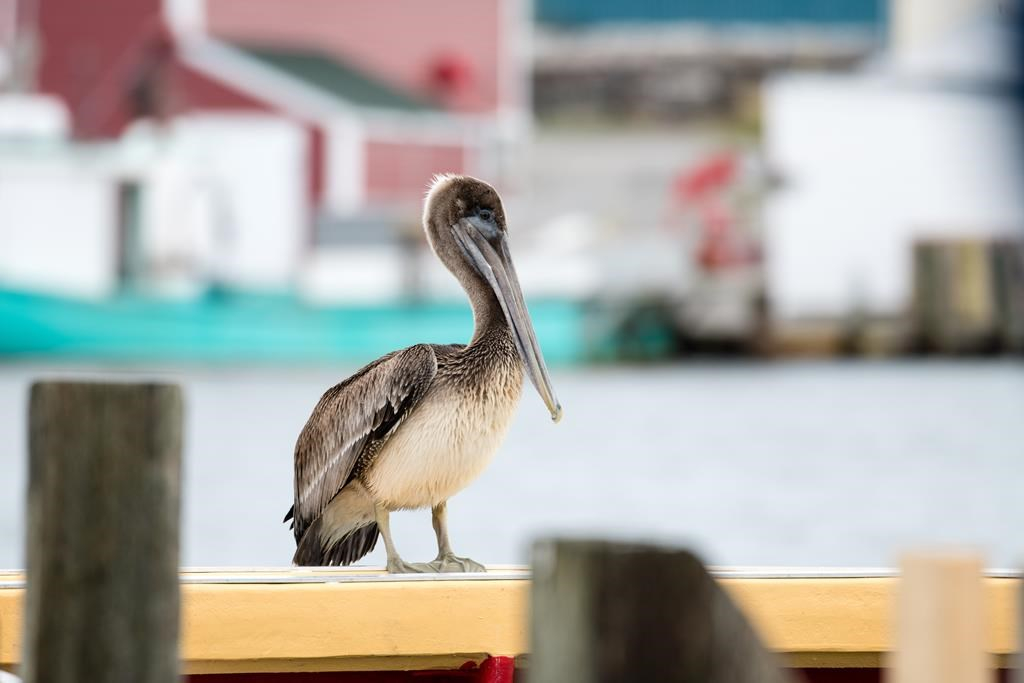 A Brown Pelican is shown in this handout photo. In the wake of post-tropical storm Dorian bird watchers have been posting hundreds of photos of rarely spotted birds that have blown onto East Coast shores. Handout photo by Steven McGrath
Previous story

Birdwatchers in Atlantic Canada have been sharing hundreds of photographs of rarely seen birds that blew onto East Coast shores during post-tropical storm Dorian.

A brown pelican in Glace Bay, along Cape Breton's east coast, is among the rarest, and has yielded numerous images as it preens and walks along a local wharf.

Photographer Steven McGrath, a member of the Nova Scotia Bird Society, says in the days following the storm he spotted a number of species he'd never seen before.

He took photos of the pelican in numerous poses, as well as photos of a Caspian tern with a coral red beak striding on a beach.

McGrath describes seeing the brown pelican as an "amazing experience," adding that he is unaware of previous sightings of the species in Cape Breton.

"A lot of these birds would not normally come this far north and to get so many all in one spot and at one time is a kind of birder's paradise," he said.

The Nova Scotia Department of Lands and Forests received reports of the pelican after the storm, and spokeswoman Lisa Jarrett said in an email that staff completed a site visit and the bird appeared to be in good health.

The department says that storm events such as Dorian can often push birds off course and into the region.

However, Jarrett says the department is asking the public to avoid crowding the bird as contact with humans "can be stressful for the animals."

McGrath says while he's enjoyed the opportunity to photograph the birds, he's aware that in some regions the numbers of birds blown onshore was very large and worrying.

"The magnitude was the largest I ever recall of seeing misplaced birds in one storm, and I find that concerning, for sure," he said.

Earlier this year, large crowds gathered in Brookfield, N.S., to observe a glossy ibis, a wading bird that feeds on larval insects, as it hunted on the wetlands.

David Currie, the president of the Nova Scotia Bird Society, has said there is a growing number of nomadic species being documented outside their usual range by birdwatchers, though he cautions these are anecdotal observations.

He said in an interview that birds can become disoriented and lose their way after storms.

When strong storms hit the northeast of Canada and the United States, Nova Scotia becomes a final refuge for some species, he said.

Blair Greenan, a federal oceanographer who oversaw portions of a recent national report on climate change, has noted there is a slight northward shift in storm tracks being observed.

This report by the Canadian Press was first published Sept. 20, 2019.

By Shelby McPhee | Opinion | September 10th 2019
State Of The Animal