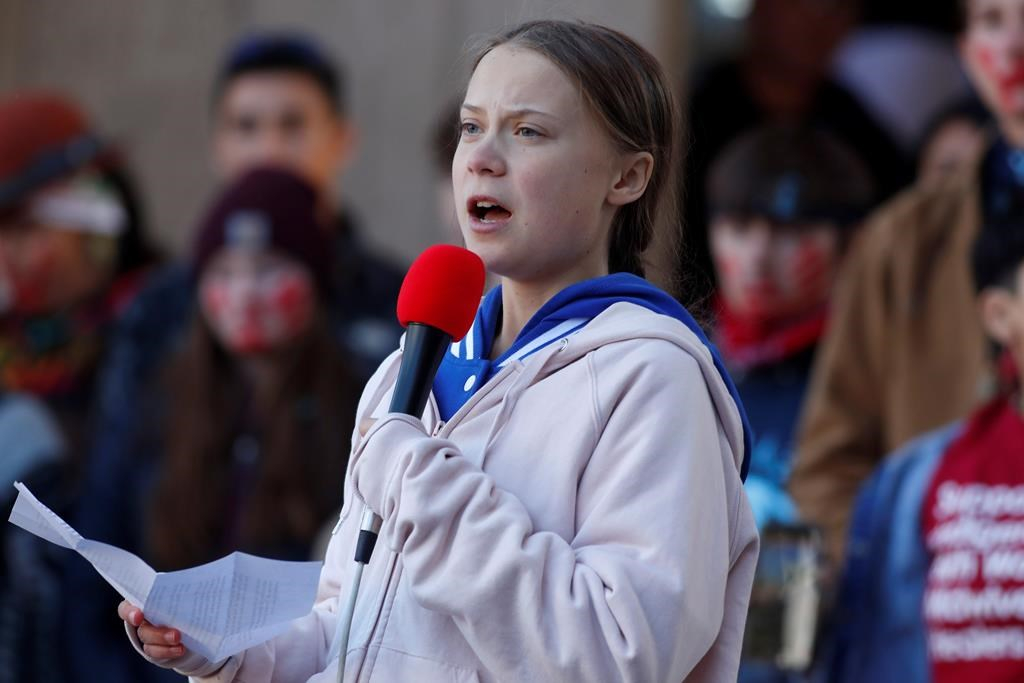 The 16-year-old tweeted that she'll be heading north following "a few days of well needed rest while enjoying the spectacular nature of Wyoming, Idaho and Montana."

She did not say when she will arrive in Alberta or where specifically she will visit.

Last week at a rally in South Dakota, Thunberg spoke out against the proposed path of the Keystone XL pipeline, which would carry crude from Alberta through Montana, South Dakota and Nebraska.

Christine Myatt, a spokeswoman for Alberta Premier Jason Kenney, reacted to Thunberg's impending visit by comparing the province to other oil-rich regions and greenhouse-gas emitters.

"We trust that Ms. Thunberg will recognize Alberta's leading human rights and environmental standards, especially in comparison to oil-producing dictatorships such as Saudi Arabia, Iran, Russia, and Venezuela — which she will presumably visit next — as well as major growing emitters like China," Myatt said in an emailed statement.

Late last month, Thunberg spoke about the dire state of the planet at a climate change protest in Montreal, one of many youth-led demonstrations her activism has galvanized across the globe.

She also met with Liberal Leader Justin Trudeau, who has praised her as "the voice of a generation" of young people demanding their leaders do more to combat climate change.

She has said she plans to keep touring the Americas through a UN climate conference in Chile in December.

This report by The Canadian Press was first published Oct. 13, 2019.

Thunberg: "The eyes of all

Thunberg: "The eyes of all future generations are upon you. And if you choose to fail us, I say - we will never forgive you."

Alberta's delusions collide with scientific reality.
Greta won't get a warm reception from any of AB's denialist leaders.
While Jason Kenney takes refuge in his war room, count on the NDP's Frost Queen to drip with her usual contempt.

Kowtowing to Big Oil, former NDP Premier Rachel Notley and her troops attacked David Suzuki, Jane Fonda, federal NDP Leader Jagmeet Singh, Tzeporah Berman, etc.
Of course, the science supports their position on climate change, not the AB NDP's.
The AB NDP threw its friends under Suncor's driverless trucks — that eliminate hundreds of jobs. About which Notley says nothing, because she is too busy flogging the 90 permanent jobs created by her pet pipeline. (More if it leaks.)
Notley's oilsands promotion could not be more cretaceous.
Wrong century to push fossil fuels.

Thunberg: "Since our leaders are behaving like children, we will have to take the responsibility they should have taken long ago."
"Change is coming, whether you like it or not."

What does "Alberta's leading

Meanwhile, the NDP responds with empty praise for its own "nation-leading" climate plan with fictional emissions reductions and its support for working people producing "responsible" oil and gas.

What is "responsible" oil and gas? How does it differ from "ethical" oil and gas? Does planet Earth respond differently to "responsible" emissions? Isn't it the same black tar goop that we are digging up and shipping to China? Isn't pollution still endangering the health of indigenous people in the region? Aren't caribou still being extirpated? Aren't wolves still being shot and poisoned? Don't most of the profits of this hellish enterprise still flow out of the country to foreign investors?

The NDP's response is just as denialist and condescending than the UCP's. In fact, it's worse, because we no longer have industry critics in the Legislature. No one heeding the science. Notley & Co. took the progressive, science-based option off the table. Albertans now have to choose between bad and worse.

A very lamentable problem in

A very lamentable problem in the Canadian political scene is the often shameful discrepancy between federal and provincial policies of the same - named - party. Alberta NDP-ers - and to some extent, B. C. NDP-ers - aren't on the same page as the federal party is becoming, thanks to pressure from left-leaning groups like the Courage Coalition. For example, even though the environmental platform of the federal Greens is exemplary in achieving better reductions in emissions, etc. than any of the others, it has not been costed, among other challenges. That makes the NDP plan the best so far.