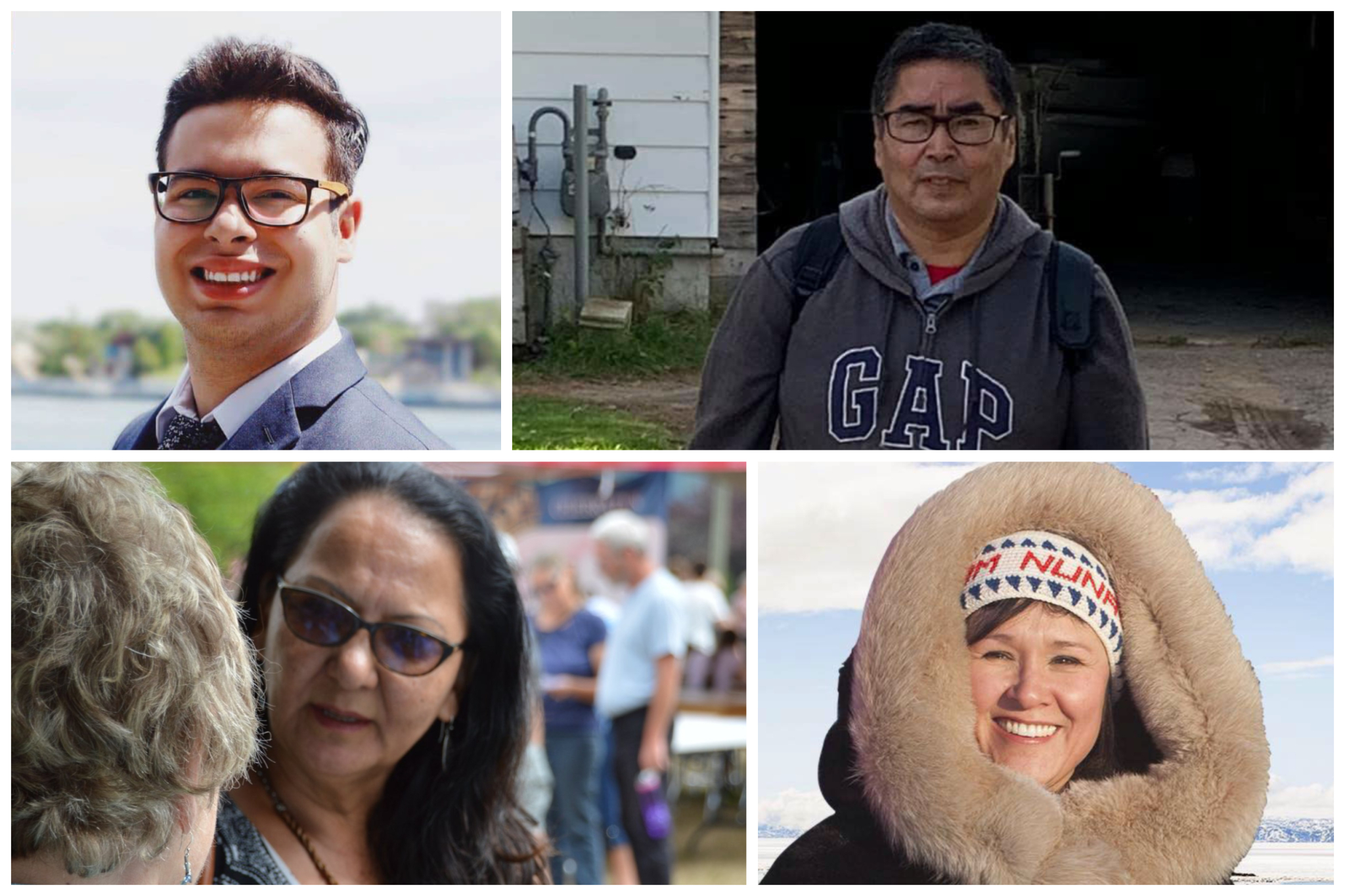 (From top left to bottom right) Jordan Ames-Sinclair, Chief Rudy Turtle, Lydia Hwitsum and Leona Aglukkaq are all in the midst of campaigning for seats in Parliament. Photos from Facebook
Previous story
Next story

According to the Assembly of First Nations, there are more than 60 Indigenous candidates in the upcoming federal election, running across parties and territories. Here, National Observer profiles four of these candidates, one from each of the major parties, who are making waves as election day approaches:

Jordan Ames-Sinclair said that the Liberals “wanted someone the exact opposite of Andrew Scheer” to run in the Conservative Leader’s riding, Regina—Qu’Appelle, and that he fits the bill.

“Even though he is a younger politician, I don’t believe he really has a new, fresh perspective to politics, where I do. I’m First Nations and I believe in the Indigenous vote, and I have to say that he doesn’t. I’m part of the LGBTQ community and I support it, and he doesn’t,” he said.

The 19-year-old Liberal candidate spoke to National Observer on the phone as he drove to Little Blackbear First Nation, which is located within his riding and about a 15-minute drive from the city centre, and as he walked through the reserve. He’s hoping to represent Indigenous interests and mobilize the on-reserve vote — he said he’s one of the few candidates who goes door-knocking on reserve.

Ames-Sinclair said that Indigenous people feel underrepresented, even though they’re a big part of the community. In the 2016 census, over 15,000 people identified as Indigenous in the riding, amounting to 20.9 per cent of the population.

Ames-Sinclair said he identifies with the Liberals because he thinks they’ve made a lot of accomplishments on the environment and in working with First Nations governments.

He called the Liberals’ controversial appeal of a Human Rights Tribunal decision to compensate Indigenous children in welfare an “interesting circumstance.” The tribunal ruled the government owed maximum compensation for children taken from their homes, meaning $40,000 to each child and $40,000 to their parents or grandchildren. Many Indigenous people were outraged by the Liberals’ choice to challenge the ruling.

Ames-Sinclair said if the Liberals appeal, then the decision becomes entrenched in law, so a Conservative government would have to pay if elected. He said to him, it’s not just about providing compensation quickly — it’s about working on a nation-to-nation basis to reach an agreement and talk about how to change the system.

He said pipelines, employment for young people and environmental regulations are other key issues in Regina—Qu’Appelle. He is currently studying business at the University of Regina and says he’ll delay graduating if elected, and will probably take spring and summer classes to see how well he can balance obligations.

For Chief Rudy Turtle of Grassy Narrows First Nation, Justin Trudeau consistently “takes one step forward and one step back.” He referenced Jody Wilson-Raybould as an example, saying Trudeau appointed the first Indigenous attorney general, and then removed her from her position amid scandal. He said he’s disappointed in the government’s appeal of the Human Rights Tribunal’s decision.

“It’s not good for children and it’s deeply upsetting,” he said in a phone interview. “He keeps talking about reconciliation and making things right for Indigenous people, and he goes out and does this.”

Turtle is the New Democratic Party’s candidate for the Kenora riding in Ontario. The riding includes 16 First Nations that don’t have access to clean drinking water. Grassy Narrows is known for having long suffered the effects of mercury poisoning in its water supply.

He said Indigenous communities in Kenora are in dire need of water treatment upgrades, and the Liberals “shouldn’t be so worried about the cost so much, they should be worried about meeting the need.”

He also identified a housing shortage, a seniors home and more funding for health centres as key issues for Kenora.

Though he’s been involved in local and Indigenous politics for a long time, running federally is a challenge that put Turtle out of his “comfort zone.” He said campaign spending limits on travel should be adapted for the north, where communities are spread out and travel is more expensive.

Turtle said if he’s elected, he plans to resign as chief so he can devote his full time and energy to being an MP.

As of Oct. 11, 338Canada predicted Liberal incumbent Bob Nault will win 33.5 per cent of the popular vote and Turtle will get 31.5 per cent. In 2015, Nault beat his NDP challenger by just over 500 votes. Kenora has a population of 62,556 and an extremely low population density of 0.2 per square kilometre (the national average is 1,418.68 per square kilometre). In 2016, 46.8 per cent of the population identified as Indigenous.

Pushing for a Green wave on the West Coast

Vancouver Island is home to the only two ridings with Green Party MPs, and Lydia Hwitsum from Cowichan Nation hopes to join that roster.

As of Oct. 10, 338Canada predicts the Greens will get about 30 per cent of the popular vote across the seven ridings on the island. Until recently, the NDP and Greens were neck and neck in predictions of who will take Hwitsum’s riding, Cowichan—Malahat—Langford, though Conservatives have edged out the Greens for second place.

“We want to be able to do things differently and take action for social justice,” said Hwitsum, giving Indigenous rights and affordable housing as examples of social justice issues affecting her riding.

Hwitsum served as elected chief for Cowichan Nation for eight years, and has also been on the B.C. Assembly of First Nations’ board of directors. She was also appointed chair of the First Nations Health Council.

She also was on a board focused on incorporating principles from the United Nations Declaration on the Rights of Indigenous Peoples to update B.C.’s environmental assessment law, so she feels well equipped to help implement the declaration in Parliament.

She said that means looking “through the lens to the rights and title of Indigenous people” and “bringing Indigenous voices into the process earlier.”

Hwitsum said housing affordability and pharmacare are two issues she’s been hearing about a lot on the campaign trail.

Cowichan-Malahat-Langford's NDP incumbent, Alistair MacGregor, won in 2015 with 35.6 per cent of the votes cast. According to the 2016 census, the riding is home to 108,052 people, of which 12.6 per cent are immigrants and 9.6 per cent are Indigenous.

Leona Aglukaaq represented Nunavut as a Conservative from 2008 until 2015, until she was unseated by Liberal candidate Hunter Tootoo (he resigned from the Liberal caucus in 2016 and resumed his position as an Independent). The riding appears to be a toss-up at the moment, between Aglukaaq, Liberal candidate Megan Pizzo Lyall and NDP candidate Mumilaq Qaqqaq.

Aglukaaq was the first Inuk to serve in federal cabinet, appointed under Stephen Harper. She served as minister of health, minister of environment and regional minister for the north.

As environment minister, Aglukkaq announced Canada’s goal to reduce greenhouse-gas emissions by 30 per cent below 2005 levels by 2030, which the Liberals maintained as a target in their subsequent government.

Aglukkaq is an advocate for food security in the north, and has criticized activists who oppose traditional hunting of seals and polar bears.

She is also focusing on broadband services in this campaign, and announced the Conservatives’ plan to improve telecommunications in rural areas.

“I know that better internet means improvements in health, education and the administration of justice,” she said in a press statement. “It encourages innovation and brings people together.”

Aglukkaq was not available for an interview before publication. But in a Facebook post, she explained why she’s a Conservative and why she opposes the carbon tax.

“People dismiss Conservative plans to scrap the carbon tax as us hating the environment. I'm Inuk. The North is my home and I love Nunavut. I don't hate the environment,” she wrote. “The carbon tax is supposed to be a disincentive to use carbon-intensive options, but in Nunavut, we have no alternatives. So it becomes punitive.”

Leona Aglukkaq took third place in the 2015 election behind the Liberal and NDP candidates. The 2016 census found 35,944 people live in Nunavut, with 85.5 per cent identifying as Indigenous, most of whom are Inuit. The average age is 27.7 years old, significantly younger than the national average of 41.06.