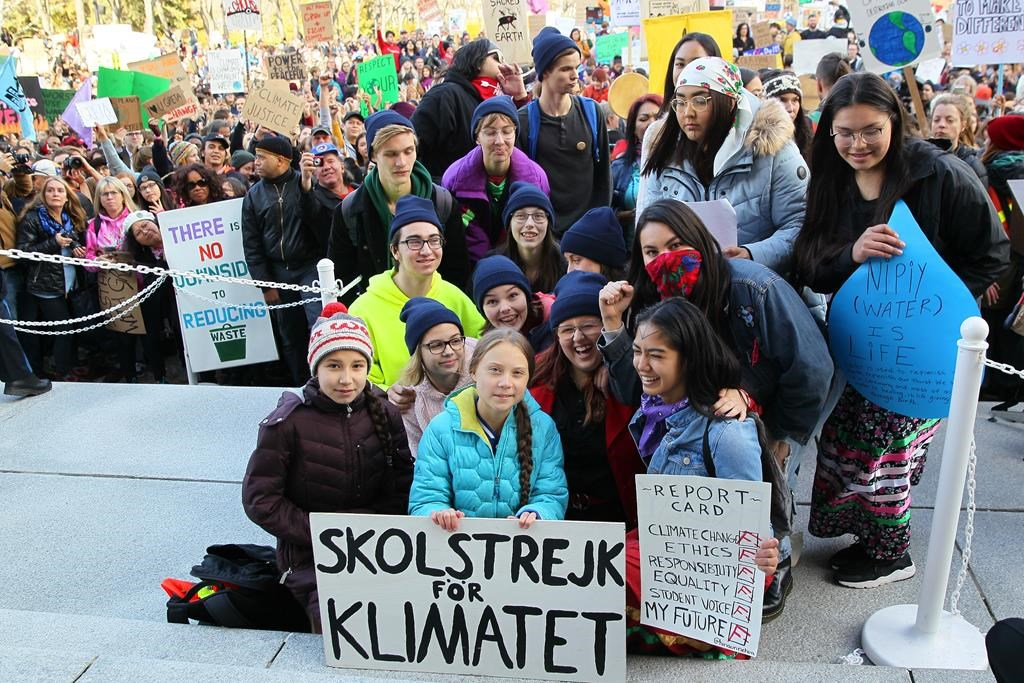 A mural of Swedish climate activist Greta Thunberg that recently appeared in Edmonton has been defaced.

The mural features a portrait of the 16-year-old girl against a bright blue background.

It was painted on what is known as a free wall not far from a light-rail transit station near Commonwealth Stadium.

The work captured the public's attention last week when a video by the person believed to have created it was shared on Twitter.

Before it was defaced, it read "Thank you, Greta" and "Thank you, Beaver Hills Warriors" — a reference to the grassroots environmental group that helped lead a large climate change rally with Thunberg in Edmonton on Friday.

The eyes on the portrait were blacked out, and a slur and a message telling Thunberg to leave Canada were written over top in French.

There was no immediate word on who may have been responsible.

Thunberg was among thousands who walked through the city's downtown to rally at the legislature, vastly outnumbering a group of oil-and-gas industry supporters at a counter-rally.

In a speech at the event, she repeated her message that the future of the planet is at stake and action must be taken to fight climate change, but she refrained from any direct criticism of the Alberta oilsands.

Thunberg spent part of the weekend near Fort McMurray doing interviews, which a local First Nation said will be part of an upcoming BBC documentary.

She was presented with a blanket and the First Nation said in a statement that it was honoured to "join forces" with Thunberg as she leads the way in "protecting our planet from the climate crisis."

Thunberg arrived in Fort McMurray on Friday night and met with Athabasca Chipewyan First Nation Chief Allan Adam, who said he told her to get Europeans to lobby oilsands investors for greener technology to extract Alberta energy. (CTV Edmonton, The Canadian Press)