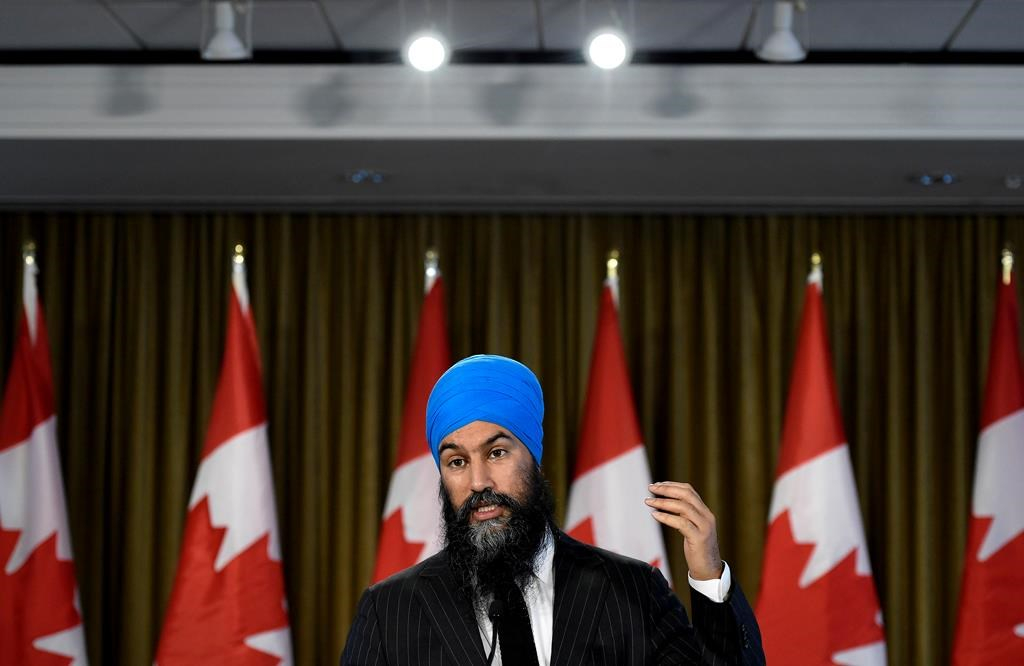 NDP Leader Jagmeet Singh speaks with reporters following the results of the 2019 federal election in Burnaby, B.C., on Tuesday, Oct. 22, 2019. Photo by The Canadian Press/Nathan Denette
Previous story
Next story

NDP Leader Jagmeet Singh says there's nothing wrong with Canada — it's the electoral system that is broken and in need of repair.

That was Singh's morning-after assessment of a federal election election result that saw his party relegated to fourth place in the House of Commons behind the Bloc Quebecois.

The Liberals under Justin Trudeau eked out a minority government victory, and managed to do it with just 33 per cent of the popular vote, compared with 34 per cent for the Andrew Scheer Conservatives.

That translated into 157 seats for the Liberals and 122 for the Conservatives, leaving New Democrats with 24, including a near wipeout in Quebec where the resurgent Bloc grabbed 32 seats.

Singh, who anticipates working more closely with the Liberals in the upcoming Parliament, says he plans to push for a proportional representation system, which would have given his party more seats based on its 16 per cent slice of the popular vote.

Trudeau broke a 2015 pledge to reform the electoral system and get rid of the current first-past-the-post system in which the candidate with the highest number of votes claims victory.

I think it would be possible

I think it would be possible for small parties like the NDP and Greens to insist on the implementation of Proportional Representation as recommended by the government's former committee on electoral reform, as a condition of cooperation in allowing the Liberals to continue to govern. I would think even the Conservatives would support that, given the recent election results. The threat would be to vote with the Conservatives on a confidence motion and topple the government. It would be a very hard concession to squeeze out of the Liberals, but if the opposition parties don't make that a priority, I'd be very disappointed in them. To make this work, the cooperation of the Block would be required, since if they voted with the Liberals on a confidence motion, the motion would pass. I don't know how Quebec feels about PR.

To answer your question about

To answer your question about Québec and PR, Premier Legault made a promise to introduce a PR bill in his first term. He has since backtracked a bit with talk of a referendum first, but the idea is generally seen favourably.

In Alberta, the Liberals

In Alberta, the Liberals received 45% of the vote but didn't win one seat. I agree with our host the voting system needs to be changed from first past the post!. Arguments I see on this on the nest circulate around "you may get NDP or Green elected" and "it would produce a string of minority Governments, we never would get anything done" Minorities have always been best for the man on the street.

I'm strongly in favour of

I'm strongly in favour of some kind of proportional representation in Canada, but in Monday's election, the Liberals received 13.7% of the vote in Alberta. Not sure where you got 45%! The NDP collected 11.5% of the vote.

Under prop. rep., out of 34 seats the vote would result in about 24 Conservative seats, 5 Liberal seats, 4 for the NDP, and possibly 1 for the Greens.

We definitely need a

We definitely need a proportional electoral system, and I'm glad to hear that Singh will make this a top priority in the coming Parliament.

I have read that the NDP is seriously in debt after the latest election (keep those donations rolling in, folks). They're in no shape to fight another election right now, so threats to topple the government if they didn't get their way would ring hollow.

Since the Bloc is concentrated in one segment of the country, I think they benefit from FPTP, so may not be very interested in pushing for Proportional Representation.

I agree that minority governments are generally better for citizens, even though every bill may take more time to negotiate. Quality over quantity, right?

I agree with Singh, even

I agree with Singh, even though getting PR is likely not going to be easy. First past the post benefits the two old line parties, and keeps Canadians looking like they can't count past two....even though a third of us prefer other parties....but even with our current results, we aren't as divided as some pundits claim.

The Bloc took NDP seats in part because the Bloc's platforms are progressive. If I were a Quebec citizen, I'd likely vote for them........I like many of their values, and am more than a little tired of parts of the west bashing Quebec because it stands up for its citizens....isn't that what Alberta conservatives claim to be doing??

When it comes to climate change, affordability, or growing inequality.....there seems to be an emerging consensus. Ideas about how to tackle these problems may differ, but it looks to me like 2/3 's of Canadians want the government to address those issues.

It's only a die hard 15-20% of the population that feel it must be their way or the highway. Even in Alberta, appetite for anger, alienation and Fed bashing is waning.....let's encourage all our politicians to work hard, find common ground, and solve the crises facing our children. We can do this.

On top of that, apparently 30

On top of that, apparently 30% of Albertans voted for parties other than the Conservatives. Likely the same sort of numbers apply to BC voters as well. Certainly when Peter Mansbridge went on the road talking to people about the election, there were people in the now-blue part of BC who cared about oceans, climate change, and wildlife extinctions.

As always, the devil is in the details. Here in Ontario, the electorate declined MPP, because the system proposed would have radically reduced the directly-elected members, and left the choice of the "balancing act members" up to the party. When I mentioned that to our then NDP MP, Craig Scott, he suggested that perhaps a slate of "balancing" members could be proposed regionally, and voted upon by region.
Which would still leave the phenomenon of extraordinarily large electoral districts, whether measured by geography or by number of voters.
I'm not suggesting that MPP is not the way to fly: it's what I would like to see, but I'd also like to see that people in northern ridings, which are geographically large and spread out, aren't going to wind up with less access than now to their representative, or worse, one that lives in Toronto (I live in Toronto and am aware of the general view of my home city held by rural Ontarians).
OTOH, Doug Ford, who couldn't get elected mayor of Toronto, and who with his brother stymied every public transit plan for a decade more or less, reduced the size of council to align ward boundaries with provincial and federal electoral boundaries. Before the infamous amalgamation forced on us by Dougie's mentor (Mike Harris), we had I believe it was 4 wards, each with 2 reps (though it might have been 8, each with 2) ... after, we had but 2 for the entire municipality. Then our amalgamated city ward was extended, and we wound up with 1 for not only the old municipal region, but a very large ward=riding, with approximately 4X the population of the prior ward. The councillor's office is too far away to get to, they are understaffed and even though the councillor is a very good representative, there's virtually no help to be had with problems at city hall, which has been structured now so that it's virtually impossible to deal with any department there at all. And the city call line representatives, nice people though they seem to be, often have insufficient skills to accurately describe a problem that has to be forwarded to a department, or even sufficient training to send it to the correct department.
I feel that those changes drastically reduced my democratic representation.

I don't know about you, but I've voted at times for the party, and at times for the candidate, and that is true as well for a number of people I know. In her riding, I'd have voted for JW-R -- an independent. None of the schemas I've seen around proportional representation would provide for independents.

Which oughtta be done, one way or another, since representatives not tied to a party could be an attractive choice, provided they have a decent platform, because their vote can't be whipped.

Actually there is one type of

Actually there is one type of PR system that can provide for independents because it does not require parties at all, the single transferable vote system used most famously in Ireland. And even certain party list systems where the voting is candidate based, as in Finland, allow for independents. The truth is that a whole plethora of PR systems have been developed, allowing more voter choice than is the case with our present system.

Canada definitely needs to dump FPTP, or what US scholars have more precisely called the single-member simple plurality system in favour of proportional representation. The question is how much PR does Canada need? If it is a matter of regional under-representation, that is, that parties and their supporters lack representatives in regions despite voter support, then one need have only a partly proportional system, and the most straightforward would be that advocated by the 1979-80 Task Force on Canadian Unity AKA Pepin-Robarts Commission. It proposed that in addition to a Commons elected by FPTP there would be sixty members elected through PR either nationally or by province to mitigate but not fully correct the regional distortions of plurality voting. This type of system would be adopted by a number of countries beginning ion the 1990s. If however the concern is not simply with regional distortions but representation of all voters then something more radical is called for, either a mixed system where FPTP results overall are not only mitigated but overridden, as for example in Germany, or a pure PR system where FPTP is abandoned entirely, as for example in the Netherlands or Ireland. To quote a great early electoral reformer, Ernest Naville, "In a democratic government, decision is the right of the majority, but representation is the right of all". Bearing in mind that even the most proportional electoral systems cannot fully satisfy this principle.