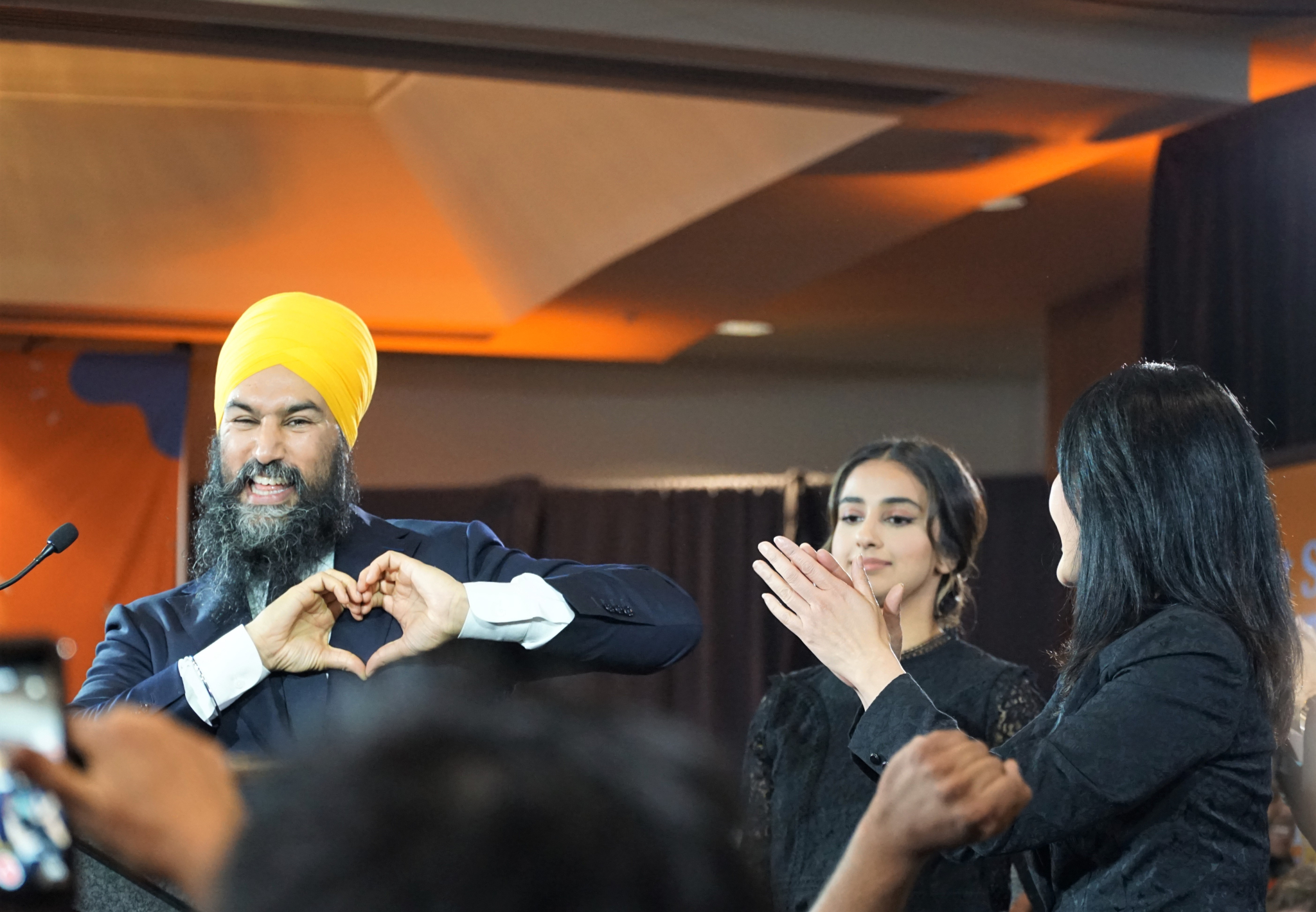 Everyone in the room was hoping for more seats — but New Democrat supporters in Burnaby, B.C., were still all smiles on Monday night.

The room erupted in applause and dancing as party leader Jagmeet Singh entered the room and took the stage. His party lost 15 seats, but that didn't stop him from being full of energy. Maybe because the 24 remaining NDP seats potentially hold a lot more power in a Liberal minority government.

Singh centred reconciliation and affordability in his speech, starting with acknowledging the territories of the Squamish, Tsleil-Waututh, Musqueam and Kwikwetlem First Nations before thanking the volunteers and his family.

Singh went on to acknowledge Grassy Narrows, ON, a community which has suffered for decades from mercury contamination. Before the writ dropped the Liberal government was in talks with the community about a care facility for people plagued by mercury poisoning. Singh visited Grassy Narrows (or Asubpeeschoseewagong First Nation) and promised an NDP government would invest $1.8 billion to ensure every Indigenous community has access to clean drinking water.

On Monday night, he said Grassy Narrows is "a community that represents the injustice, historically and ongoing, that Indigenous people continue to face."

"There are people in Grassy Narrows who are so resilient in the face of neglect and negligence and being ignored," he said. "We brought the national campaign to Grassy Narrows to let them know they do matter."

The NDP says Singh is the first federal party leader to visit Grassy Narrows and report from the territory. Grassy Narrows Chief Rudy Turtle ran for the NDP in Kenora, ON, but came third to the Conservatives and Liberals. The NDP ran 27 Indigenous candidates — the most of any party — but only two were elected: Leah Gazan in Winnipeg Centre and Mumilaaq Qaqqaq in Nunavut.

The crowd at Monday night's event met Singh's commitments to Indigenous peoples with boisterous enthusiasm, breaking into an uproarious cheer when Singh said "we want Canada [to be] a nation that takes reconciliation seriously," which the audience met with an uproarious cheer.

While land acknowledgements have become common across the country, only Singh and Elizabeth May did acknowledgements in their election night speeches. Justin Trudeau made one reference to making reconciliation a priority in a French section of his speech.

While he didn't speak to Indigenous Peoples, Trudeau did speak directly to Alberta and Saskatchewan, which saw a blue wave of Conservatives.

"I've heard your frustrations, and I want to be there to support you," he said.

Meanwhile, in Regina, Andrew Scheer said this election is the "first step" to the Conservatives beating the Liberals. He said that "nation-building projects remain under attack, leaving thousands of Canadians out of work and holding back our nation's potential."

While he didn't mention Indigenous Peoples directly, the language echoes a comment he made in a leaders' debate on Sep. 12, when he said “We cannot create a system in this country where one group of individuals, one Indigenous community, can hold hostage large projects that employ so many Indigenous Canadians,” he said.

May acknowledged the Esquimalt, Songhees and WSÁNEĆ peoples at her event in Victoria. She also said she was "heartbroken" that their candidate Racelle Kooy, from Samahquam First Nation, did not win in the Victoria riding, who she said was a "spectacular Indigenous woman whose voice I wanted to hear in parliament."

Singh also emphasized affordability, and promised to push the NDP's platform in Ottawa.

While there's been no word of a formal coalition, he said "if the other parties work with us, we have an incredible opportunity."

One supporter, Rajinder Pandher said he was optimistic that the NDP will have more influence in a minority government.

“It doesn’t matter what the result is. The enthusiasm, the leadership he gave to the masses, to the young ones — it’s par excellence,” he said.

NDP supporter Leo Lin recently became a citizen and was voting for the first time. He said he was disappointed by what he called Liberal “scare tactics” to dissuade people from voting NDP and Green, by saying it could split the vote and result in a Conservative government.

“We’re figuring that worked,” he said, looking at the results. “We were hoping NDP would have more seats.”

But the mood remained mostly celebratory, with the crowd breaking out into dancing and cheers while Singh circulated the room for nearly an hour following his speech.

The NDP took 11 seats in B.C., tied with the Liberals. The Conservatives won 17 seats in the province and the Greens kept their two existing seats. Meanwhile, Jody Wilson-Raybould won her much-watched race as an independent in Vancouver-Granville.