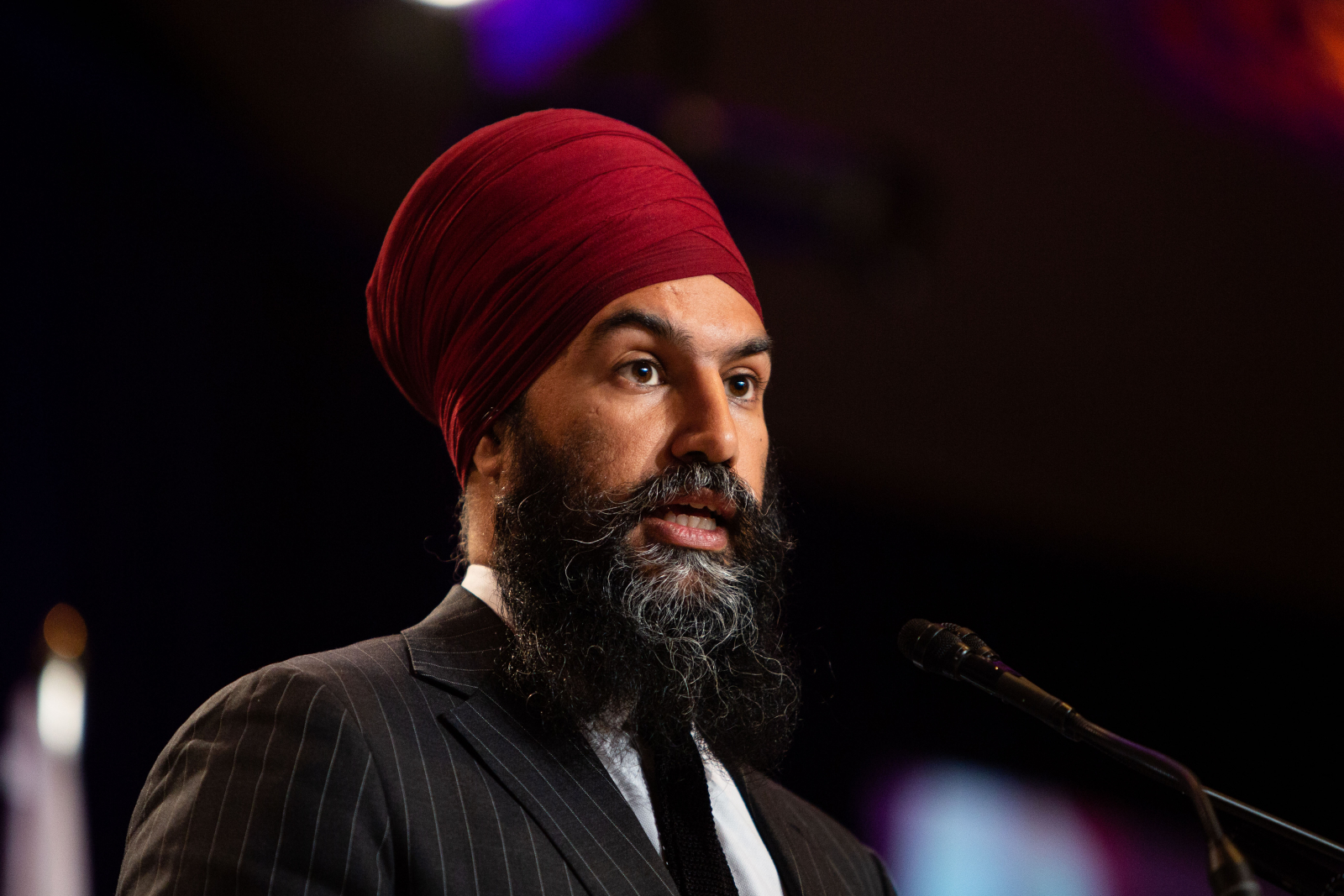 Jagmeet Singh of the New Democratic Party deliver remarks and answer some question at the Assembly of First Nation's Special Chiefs Assembly at the Hilton Lac-Leamy in Gatineau, on May 1st 2018. Photo by Alex Tétreault
Previous story
Next story

The first time Grassy Narrows First Nation Chief Rudy Turtle was asked to run for the New Democratic Party, he said no.

The second time he was asked, he thought about it.

Turtle decided to run because the social democrats had done quite a lot of work in his southern Ontario community, especially NDP MP Charlie Angus. And of all the leaders, the party's leader Jagmeet Singh was the first federal party leader to visit Grassy Narrows, and the one who had visited the area the the most.

"The north would have a voice from someone who has lived in the area their entire life, someone who has experienced the north," Turtle said just as Singh began his speech to concede the 2019 election race to fourth place.

A long-time advocate for the clean-up of mercury in the English and Wabigoon river systems – which has been impacting and poisoning Grassy Narrows and Wabaseemoong members for generations – Turtle was sad, but not disheartened by his first foray into politics.

"This is just the beginning," he said. "There will be more Indigenous candidates in the future."

As Monday night's election came to a close with a projected Liberal minority government, the poll results that have emerged thus far showed that there were wins and losses emerging for Indigenous communities.

There were a record number of Indigenous candidates running in the 2019 federal election, an analysis by the Assembly of First Nations has found: at least 62 First Nations, Métis and Inuit candidates were hoping to win seats in the House of Commons.

The NDP ran the highest number of Indigenous candidates at 27. The Liberals had 18, the Greens and Conservatives each seven, and two were running for the Peoples Party of Canada.

Incumbent NDP MP Niki Ashton (a longtime ally) cruised to re-election in Churchill Keewatinok Aski – the riding with the largest Indigenous population (by numbers). Ironically, Ashton faced off against three Indigenous candidates for the Liberals, CPC and Greens.

NDP's Charlie Angus, Timmins-James Bay incumbent and longtime adovacate for Indigenous communities, was reelected to a sixth term in office.

For the first time, the Miꞌkmaq Nation sent one of their own to the House of Commons as Liberal Jaime Battiste was elected in Sydney-Victoria, N.S. He was the first new Indigenous MP elected Monday night.

Jody Wilson-Raybould, a former Liberal cabinet minister, was seeking re-election as an Independent — and succeeded.

And while it's too soon to say whether the 2019 turnout beat the 2015 election, which attracted the second-highest number of Indigenous voters, onlookers were encouraged by the precedent this election set.

'I saw an immediate shift'

At the beginning of the election campaign, when Aylan Couchie, an Anishnaabe artist and writer from Nippising First Nation in Ontario, drove around her reserve, all she saw were Liberal and a few Green signs.

Something changed after Prime Minister Justin Trudeau announced that he would be challenging a landmark Human Rights Tribunal decision that ordered the federal government to pay dues to those who had been taken by the on-reserve child reserve system.

"I saw an immediate shift in terms of people from my reserve who had switched over to NDP, including my chief," Couchie said in an interview.

Singh derided Trudeau's decision in the first leader's debate on Sept. 12 (during which Trudeau was absent) saying that the NDP would never take Indigenous kids to court.

(He repeated that again in his election concession speech, which mentioned Indigenous peoples and centred on a message of reconciliation more than any of the federal leaders.)

That encouraged Couchie and others in Indigenous communities across the country.

"I think that that bodes well for what we're hoping for, because at this point, I'm a little bit worried about the fact that even though Justin Trudeau has now won, he's pissed us off to the extreme," Couchie said. "So what's to stop him from just continuing to do what he's doing?"

After nine years of former Conservative prime minister Stephen Harper, the federal government's relations was "pretty antagonistic, hostile, cold," Couchie said. There was a common enemy to defeat, so Indigenous communities invested a lot of political capital into the Trudeau government, that started by a historic high on-reserve rate of Indigenous votes that stood at almost 47 per cent.

Since then, however, the Liberal government didn't deliver as much as was expected from them. They didn't deliver on changes to the Indian Act. They delivered on investments in their communities at the beginning of the election year. And they didn't act fast enough on reconciliation.

"I don’t know if there’s enough apathy for them to withdraw completely from electoral politics," Veldon Coburn, a University of Ottawa professor who is Anishinaabe, an Algonquin from Pikwàkanagàn, said. "But they were riding on a lot of hope, and that all lies on the shoulders of our new Indigenous champions and our non-Indigenous champions like Charlie Angus and Nikki Ashton."

For Coburn and others, Singh was "somebody who would stand up for our children."

"His words signalled to a lot of people that while we may not see reconciliation in our generation, for the kids who are going to come of age in 10 to 20 years, it could be something they can look forward to."

In part because of the NDP's engagement with Indigenous communities and issues, Chris Cowie believes the Indigenous vote is likely just as strong this election.

Cowie says that, irrespective of how many Indigenous voices are seated in the House of Commons, he is hopeful the NDP will be able to apply pressure in a minority government situation.

"Indigeous people tend to fall on the backburner," he said. "The key thing will be whether NDP can be a backer-uppper, to push the Liberals to be more progressive and more fast forward, or just more forward."

Editor's note: This article was updated on Oct. 22, 2019 at 3:06 p.m. to correct that Veldon Coburn is a professor at the University of Ottawa (not Carleton University).