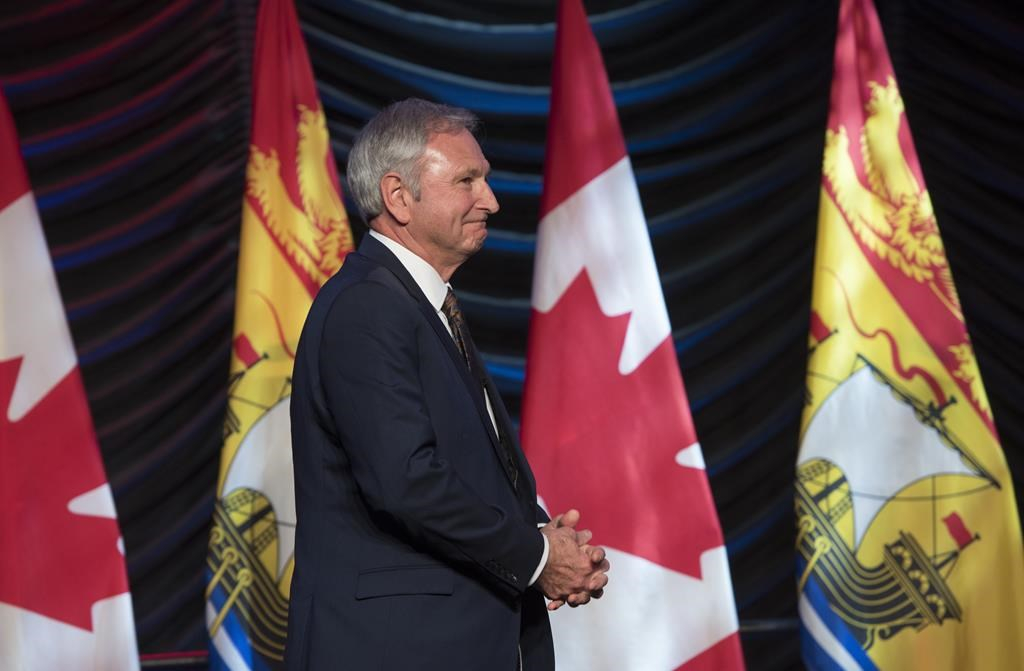 New Brunswick Premier Blaine Higgs walks onto stage to deliver the State of the Province address in Fredericton on Thursday, January 31, 2019. File photo by The Canadian Press/Stephen MacGillivray
Previous story
Next story

While some of the five provincial leaders who had publicly criticized or legally challenged the carbon tax maintained their attacks in the hours after voters elected a minority Liberal government, at least one appeared to back down.

The dissenter was New Brunswick Premier Blaine Higgs, who watched as residents handed six of his province's 10 seats to Liberals and one to a member of the Green party during Monday's vote.

"Our position was always let the industry pay for the technology to put into research and development and not force taxpayers to pay that," Higgs said at a news conference. "People voted for it, so we in New Brunswick have to find a way to make it work."

Higgs paved the way for the province to come up with its own scheme to reduce carbon emissions, which would free New Brunswick from the federal carbon tax.

The measure was introduced earlier this year and imposed upon provinces who had not implemented carbon-reducing regimes of their own. Those provinces included Saskatchewan, whose premier Scott Moe vowed on Tuesday to maintain his crusade against the tax.

In a terse statement, the Saskatchewan premier called on Trudeau, whose Liberals failed to secure a single seat in Saskatchewan and neighbouring Alberta, to extinguish the blaze of frustration burning in the Prairie provinces. He cited cancelling the carbon tax as one measure that could get the job done.

"Last night, Prime Minister Trudeau stated to Saskatchewan and Alberta: 'I've heard your frustration. I want to be there to support you,'" wrote Moe. "Those are nice words, but we need action."

Alberta Premier Jason Kenney echoed that message in a Tuesday afternoon address to the legislature, saying the province's residents called for fairness and respect with "one loud voice of defiance" when they failed to elect a single federal Liberal.

Kenney went on to say that while he's open to the idea of imposing a "levy" on high-carbon emitters, he opposes taxing everyday consumers.

"Justin Trudeau and I disagree about the utility of punishing seniors for heating their homes and people driving to work," he said, making no mention of the rebates contained in the federal carbon tax plan. "I just do not think that is effective environmental policy."

Manitoba Premier Brian Pallister said his province intends to pursue its own course of action, calling for less acrimony around the issue of carbon taxes.

"We are going to proceed with our made-in-Manitoba green plan with or without the federal government's support," Pallister said at a press conference. "I would just hope that we could continue to work together on these green projects, not divide ourselves and fight about carbon taxes."

There was relatively little comment from Ontario Premier Doug Ford, the fifth member of the group dubbed "the resistance" and one of the most vocal opponents of the federal carbon tax.

Ford, who was all but invisible during the election campaign, had previously vowed to resort to any measures necessary to eliminate the carbon tax. In Ontario, this has included a court challenge similar to one mounted in Saskatchewan, as well as an aggressive new law forcing the province's gas stations to post anti-carbon-tax stickers on their pumps.

In the lead up to the election, Ford had said the results would dictate whether he persisted in his roughly $30-million plan to fight the tax.

But the day after Trudeau's re-election, and following a phone call between the two leaders, Ford's office was striking a more cautious tone.

"As we evaluate the results of the federal election, and as the premier said previously, we will continue to discuss our government's efforts to fight the federal carbon tax," spokeswoman Ivana Yelich said in a statement.

Trevor Tombe, an economist with the University of Calgary, said the combative tone among "the resistance" may not find favour among the newly configured parliament.

"I see carbon pricing as here to stay and as a central piece of climate policy," he said.

Tombe noted both Conservative governments in Alberta and Ontario have established their own carbon price models on industrial emitters, but have shied away from calling their system a carbon tax because it contradicts their stance on the federal tax.

"The over-simplification of the Conservative rhetoric in opposing carbon pricing completely is not in line with actual policy decisions they're undertaking," he said.

— With files from Kevin Bissett in Fredericton and Kelly Geraldine Malone in Winnipeg.