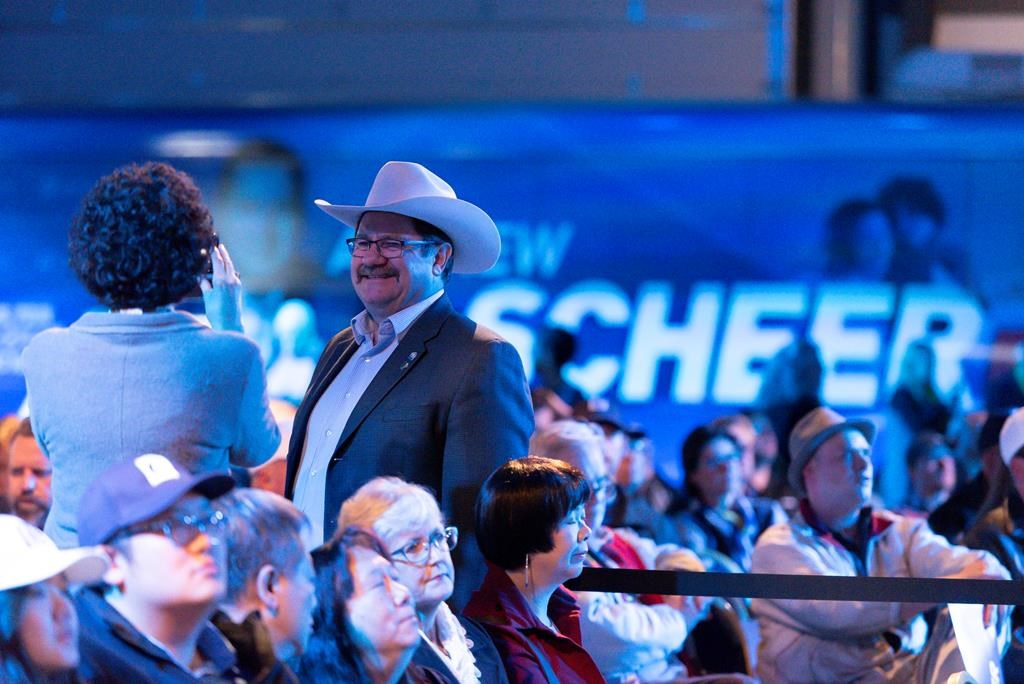 Helge By poses for a picture taken by his wife Candace at Conservative Party HQ on Election Day in Regina on Monday, October 21, 2019. Photo by The Canadian Press/Michael Bell
Previous story
Next story

Alberta and Saskatchewan were painted a solid Conservative blue on Monday, but leaders must now wrap their heads around getting resources to market with a Liberal minority government in Ottawa that will need the help of other parties to remain in power.

When federal NDP Leader Jagmeet Singh announced recently that he would effectively give provinces vetos over projects that cross boundaries, Saskatchewan Premier Scott Moe Tweeted a "Liberal-NDP government would be a disaster for Western Canada."

Political scientist John Soroski said that since the Liberals came close to the 170-seat majority mark, the future of the Trans Mountain pipeline expansion to the British Columbia coast is likely secure with the Conservatives helping out.

But he noted the federal carbon tax on provinces and Bill C-69, the controversial legislation that overhauls the approval of resource projects, are likely here to stay.

"There could've been worse outcomes," said Soroski with Edmonton's MacEwan University. "There's some degree of uncertainty here (with the minority), but I think it's manageable."

The Calgary and Edmonton chambers of commerce, in a joint statement, urged politicians of all stripes to keep working to help Alberta's lagging economy.

"We can make bold choices now to boost competitiveness or risk watching from the sidelines as other nations compete and win," said Edmonton Chamber of Commerce president Janet Riopel.

In the longer term, however, Soroski noted that the result will likely increase Western alienation, especially as the Liberals will likely need to give heavier weight to interests further left on the political spectrum.

"There's going to be an enhanced sense of conflict with Ottawa," he said.

Both provinces did their part in the vote to help the Conservatives in the election, wiping out tiny beachheads the NDP and Liberals held and knocking out two cabinet ministers.

"The work I did on the Trans Mountain pipeline expansion, the consultation I did with the Indigenous communities to fix a broken process and have that project move forward ... is something that I am so proud of," Sohi told supporters Monday night.

Goodale said any one campaign is only temporary.

"There will be new challenges to face in the weeks and months and years ahead. And there will be opportunities for all of us ... not just to celebrate victories elsewhere but also to reassemble, to celebrate the rejuvenation, recovery and victory once again of the Liberal candidates in Regina Wascana."

Kenney, a former Conservative MP and cabinet minister under former prime minister Stephen Harper, made it plain that a Liberal government, particularly one beholden to the NDP or Greens, would be debilitating to Alberta's — and by extension Canada's — economy.

Minority governments tend to have shorter shelf lives than the full four year terms of majorities.

Soroski said Kenney needs to put the personal enmity with Trudeau aside for now and "ride this out and make sure the (Trans Mountain) pipe gets in the ground."