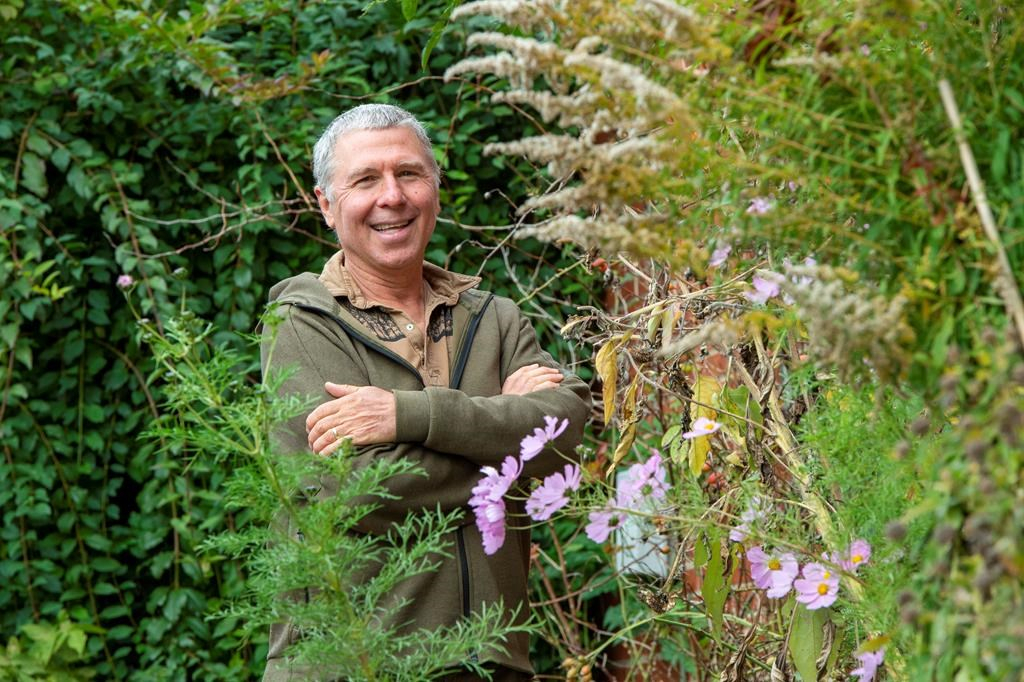 Mike Perozak stands outside his home in Toronto on Friday, October 25, 2019. Photo by The Canadian Press/Frank Gunn
Previous story
Next story

While most homeowners are raking autumn leaves, Mike Perozak is helping his neighbours in downtown Toronto prepare their gardens to welcome guests in the spring.

They are ripping up grass, filling their lawns with native plants meant to encourage bees and other pollinators to take up residence next year.

The 58-year-old and several of his neighbours are tapping into a municipal grant program that gives participants $5,000 to make their homes a haven for pollinators and hopefully reverse the decline of a species that's essential for crop production across the country.

Perozak said the relatively modest commitment of time and money he and his 36 fellow PollinateTo grant recipients are making has potential to bring rewards reaching well beyond the local community.

"Every front lawn could be a meadow, or full of forest plants, depending on if you have sun or shade," he said. "We could live in a paradise of butterflies and insects and be part of the ecosystem again."

With the $5,000 grant money, Perozak and other members of the Danforth Gardens Neighbourhood Association will expand a local school garden and plant rows of native flowers at four homes and a neighbourhood park.

The goal is to create a pollinator corridor to attract bees, boost an ecosystem under stress, and help local farmers worried about the decline of a species that's essential to their livelihood.

Many bee, butterfly and other pollinating insect populations are in decline, threatening fruits and vegetables from Ontario's $2.4-billion annual crop production. Researchers believe habitat loss, parasites, pesticides and climate change are likely reasons for the decline.

To help attract pollinators to the neighbourhood, Perozak and his fellow team members said they plan to create green spaces that don't resemble a traditional garden.

He said pollinators need a diversity of plants that are native to the region, such as Black-eyed Susans. They also require dead wood, stems and leaves to ride out the winter.

"We'll be planting a variety of flowering plants that bloom at different times of the year … providing more constant places for pollinators," said Monica Gutierrez, one of the team members. "I'll get rid of all my grass entirely."

The grant recipients, drawn from more than 150 applicants, have planned a variety of different spaces meant to draw pollinators in the spring. These include front-yard garden patches stretching across city streets, as well as projects at community areas such as schools or parks.

Environmentalists welcome the program, noting that a boost in pollinator populations could help put an end to some of the time-consuming and costly measures farmers have been resorting to in recent years to help maintain their crops.

The insects are shipped long distances across Canada and the United States to match complex blooming seasons. Canada's blueberry crops, which was valued at $244 million in 2018, according to the Ministry of Agriculture, require thousands of rented pollinators in Atlantic provinces.

"The hope is that over time we can work backwards to having more complimentary native pollinators, rather than being totally dependent on imported, and increasingly vulnerable, honeybees," said Jode Roberts, senior strategist at the David Suzuki Foundation.

Roberts praised the approach used by Perozak and others, saying groups of properties with pollinator-friendly plants are more likely to yield results than individuals working alone.

The sum of money the city is willing to pour into grants, he added, is a sign that Toronto is taking the issue seriously.

Financial incentives are a common environmental policy tool to encourage the uptake of cleaner technologies, such as subsidies for electric vehicles, or tax rebates for home retrofits.

"We consulted with over 7,000 members of the public, and the overwhelming message we heard was 'we need incentives'," said Patricia Landry, an officer with the city's Parks, Forestry and Recreation.

The grants were recommended as part of a broader Pollinator Protection Strategy, unanimously adopted by Toronto city council in April 2018. The city said it will offer the PollinateTO community grants again in 2020.

This report by The Canadian Press was first published Oct. 27, 2019.