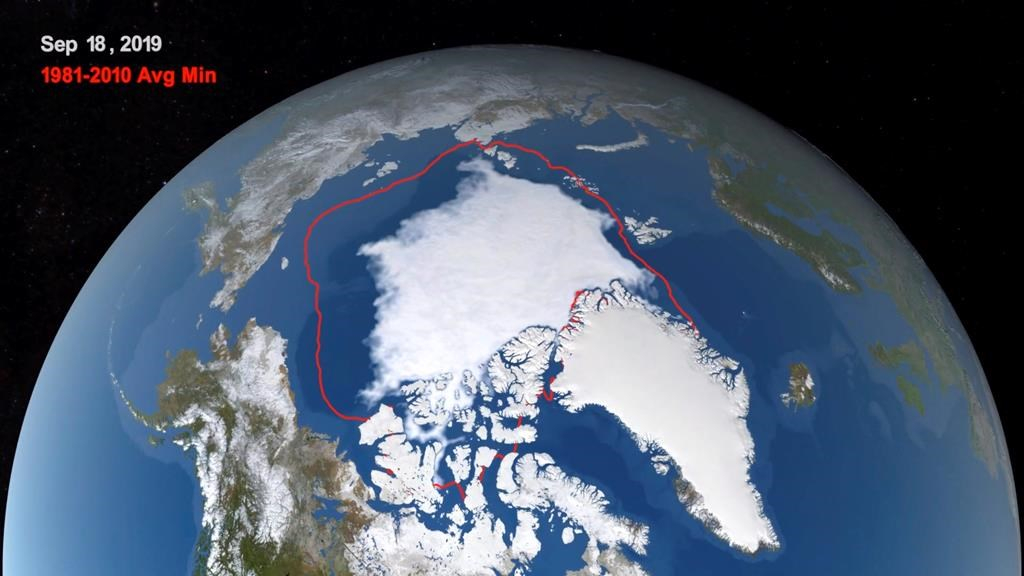 This image from video provided by NASA shows the likely 2019 minimum extent of ice in the Arctic Sea on Sept. 18, 2019, compared with the average minimum from 1981-2010. File photo byTrent Schindler/NASA via AP
Previous story

Canadian research is part of an extensive global climate change study that has found billions of the world's poorest people are at risk.

The results, published Thursday in the journal Science, raise troubling questions about who will be able to adapt in a shifting, less dependable world.

"There's a great potential for the problems to occur where people have the least ability to cope with it," said Elena Bennett, who studies ecological systems at McGill University and is one of the paper's 21 co-authors.

The team considered three ways in which humans depend on nature. Many crops around the world are pollinated through healthy insect and bird populations; shorelines are protected from erosion and storm surges by coral reefs and coastal marshes; and water quality is protected by filtering swamps and wetlands.

In some places, those benefits are provided through technology such as flood infrastructure or water treatment, or simply by buying food on the global market instead of growing it locally. Elsewhere, however, people still rely on nature.

The team was able to use large amounts of data from sources such as satellites to model where nature was providing those benefits, and where people needed them and weren't getting them.

It then projected the consequences of future climate change on those benefits.

"It gets at what's the contribution of nature," said Bennett. "Where is this important to people?"

The research found that if nothing is done to further mitigate climate change, up to 4.5 billion people by 2050 will face the possibility of water contaminated by chemicals such as nitrogen from agricultural runoff. It also concluded that five billion people might have to deal with crop losses as a result of pollination failure.

But while shoreline risks are spread evenly throughout the globe, the paper concludes the other threats aren't.

"Where we see the greatest need, we also see declining ability to meet those needs," said Bennett.

"We see many more people who are at higher risk of water pollution, coastal storms, crops that aren't pollinated to their fullest extent. That ends up playing out a lot more in developing countries than in developed countries."

The report says Africa and South Asia are likely to be the most threatened. Well over half the population there could face higher than average risks, it says.

That may seem far away, but it's not, said Bennett.

"You don't have to look far before you think, 'OK, if Bangladesh floods, now you've got hundreds of millions of climate refugees leaving Bangladesh and going where?'

"You don't have to follow that logical train very far to realize you've got real problems on your hands."

The report notes the risks fall dramatically with efforts to fight climate change. More sustainable economic scenarios cut the risks by at least two-thirds and in some cases by up to nine-tenths.

"It is very easy for us to just assume that those (natural services) are there for us and they're always going to be there for us no matter how we abuse and take advantage of them," Bennett said.

"But if we continue to just take this for granted, we've very likely headed to a place that isn't the place that we want to live. Or our kids and grandkids to live either."