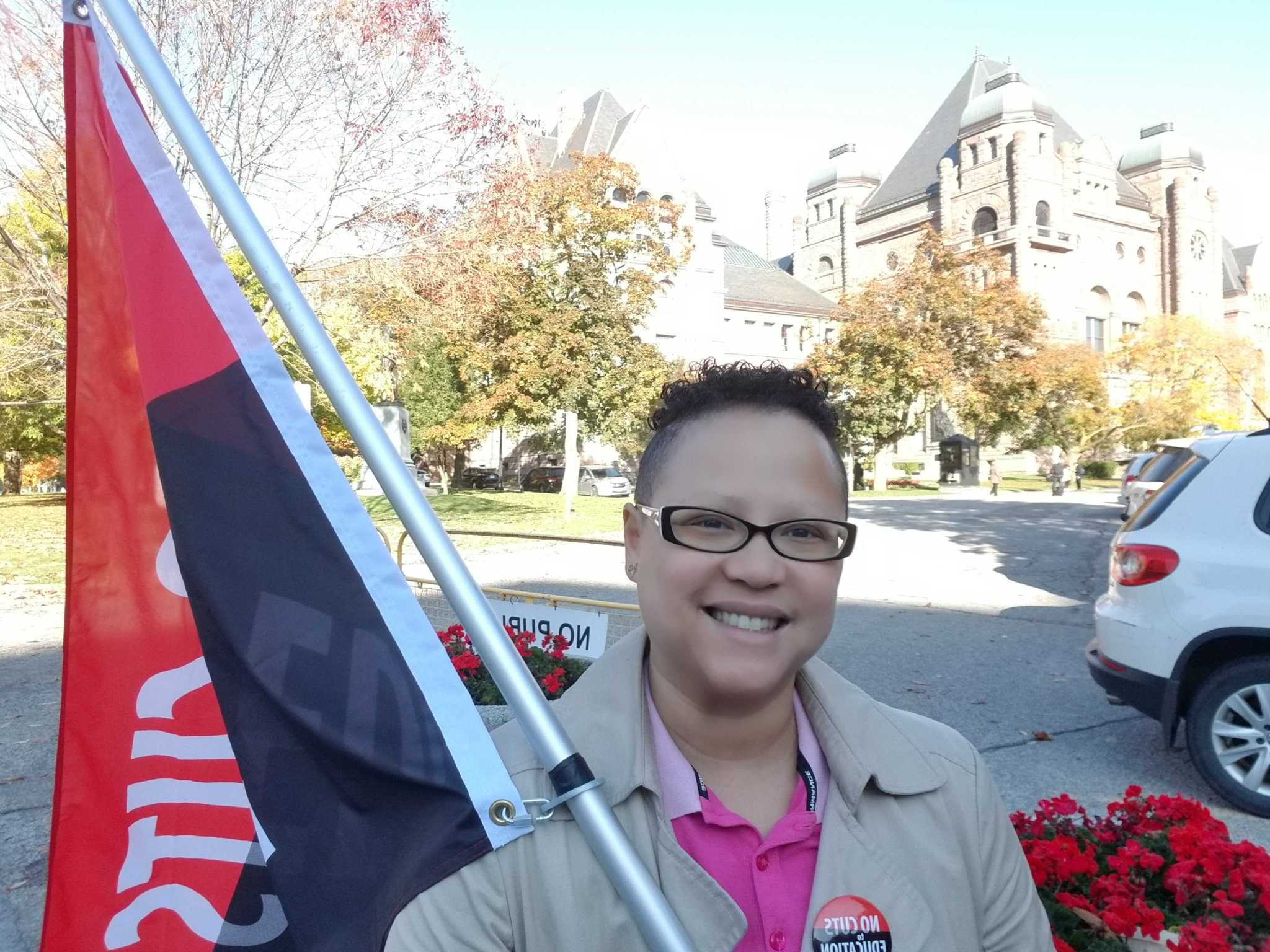 Vanessa Stoby, a high school teacher and political action officer with the Ontario Secondary School Teachers' Federation at a protest outside Queen's Park on October 28, 2019. Photo by Alastair Sharp
Previous story
Next story

A chorus of protests greeted Doug Ford's Progressive Conservative government as it reconvened Ontario's legislature on Monday after a nearly five-month break.

Ford kept out of the public eye throughout the federal election cycle, in an attempt to put some distance between sharp criticism of his provincial government and the platform of his federal Conservative counterpart, Andrew Scheer.

Justin Trudeau's federal Liberals retained power in Ottawa but lost their majority in the Oct. 21 ballot.

Now the fortunes of the federal Conservative party are settled, Ford's provincial government is back and facing looming labour unrest, with protesters from the Ontario Federation of Labor, CUPE Ontario and other unions circling Queen's Park with an oversized puppet in Ford’s likeness as teachers' unions negotiate new contract terms and prepare to strike if necessary.

"Hey hey, ho ho, Doug Ford's government has got to go," chanted some of the roughly 100 people protesting cuts to education and social services during the slow procession.

The government reached a tentative deal with school support staff during the summer.

Ford also shuffled his cabinet during the break, and his controversial chief of staff Dean French resigned amid accusations of nepotism.

Inside the legislature, the first order of government business was a bill to cut red tape. Ford wants to save businesses and individuals $400 million through red tape reduction by June 2020.

On this first day the debate in the house was more muted than in the previous session. Last session, government MPPs would routinely break out in exuberant applause in reaction to their ministers’ statements. Opposition members took to jeering. The bedlam prompted Speaker Ted Arnott to write to all parties earlier this year.

House leader Paul Calandra said the government had not told its members not to stand up.

“There are going to be days when there will be very vigorous, passionate debate,” he told reporters.

Ford has promised to stick to his legal challenge of the federal carbon tax, after losing the first two rounds in the Ontario courts. The case is currently awaiting a Supreme Court decision on whether it will hear an appeal of the lower court defeats.

Andrea Horwath, the leader of the opposition NDP, asked Ford during question period why he insisted on continuing a fight against climate action that is costing Ontario millions of dollars.

“We ran on making life more affordable for the people of Ontario,” Ford replied. “We didn’t run on increasing gasoline prices by 35 cents a litre.”

He said Ontario had its own plan to protect the environment and “that plan does not include taxing the people of Ontario, taxing businesses.”

He got a shake of the head from former Liberal premier Kathleen Wynne when he claimed credit for the progress Ontario has already made towards its emission reduction targets, which were largely due to Liberal government actions including the phasing out of coal-fired power generation.

“We’re going to fight this job-killing, regressive carbon tax,” Energy Minister Greg Rickford told reporters during a break in proceedings, adding that a campaign to inform drivers about the cost of carbon pricing with stickers on gas pumps will continue.

The stickers, and the provincial government more generally, do not reference the fact that Ottawa is returning carbon tax revenue to the provinces where they are collected, including 90 per cent going directly to taxpayers via rebates.

“The premier is using $30 million of public money to fight the Trudeau government in court over the carbon tax,” the NDP’s Horwath told reporters. “That is a waste of money, a waste of time, and it’s waging war on the environment. None of those things should be happening.”

She said her party’s Green New Democratic Deal aims to make Ontario a zero-carbon economy by 2050, whereas the government is only committing to a 30 per cent reduction from 2005 levels by 2030.

Green Party of Ontario Leader Mike Schreiner said instead of fighting the carbon tax, Ford should be seeking federal help on climate action priorities that would better serve the province, including the electrification of the transportation system (including a push to manufacture more electric vehicles in the province) and more retrofitting of buildings.

“I’m deeply disappointed that the premier is continuing to waste our tax dollars to try to sabotage climate solutions with a politically motivated lawsuit against the federal government that he has little chance of winning,” he said, adding that if it was successful eight in 10 Ontario residents would pay higher taxes.

The government's fall economic statement will be delivered by Rod Phillips, who moved from the environment portfolio to finance, on Nov. 6.

The government has been accused by rivals of understating the province’s financial position, with recent public accounts showing the 2018-19 deficit was $7.4 billion, about half the $15-billion shortfall they once estimated.

The Financial Accountability Office of Ontario (FAO) has said the difference between the actual deficit and the $11.7 billion deficit projected by both the FAO and the government at the time of the province’s 2019 budget was due to “policy choices by both the previous and current governments – including the cancellation of the cap and trade program and higher spending on electricity subsidies.”

The FAO updated its view on the province’s credit rating ahead of the resumption at Queen’s Park, noting that Moody’s had downgraded its credit rating from AA to AA-, while Fitch maintained its AA- rating and revised its outlook to stable from negative. Two other credit rating agencies did not change their view of the province’s fiscal position since the FAO’s last report.

“While Ontario benefits from a strong, investment-grade credit rating, the four agencies cite several concerns regarding Ontario’s credit outlook, including the province’s elevated debt burden, the prolonged and on-going period of budget deficits, and an outlook for relatively moderate economic growth compounded by heightened risks,” it said.

Ontario has recorded on-going budget deficits each year since 2008-09, with continued projected deficits until 2022-23, the FAO said.

Editor’s note: This article was updated at 3 p.m. on Oct. 28 with comments from various politicians and FAO update.