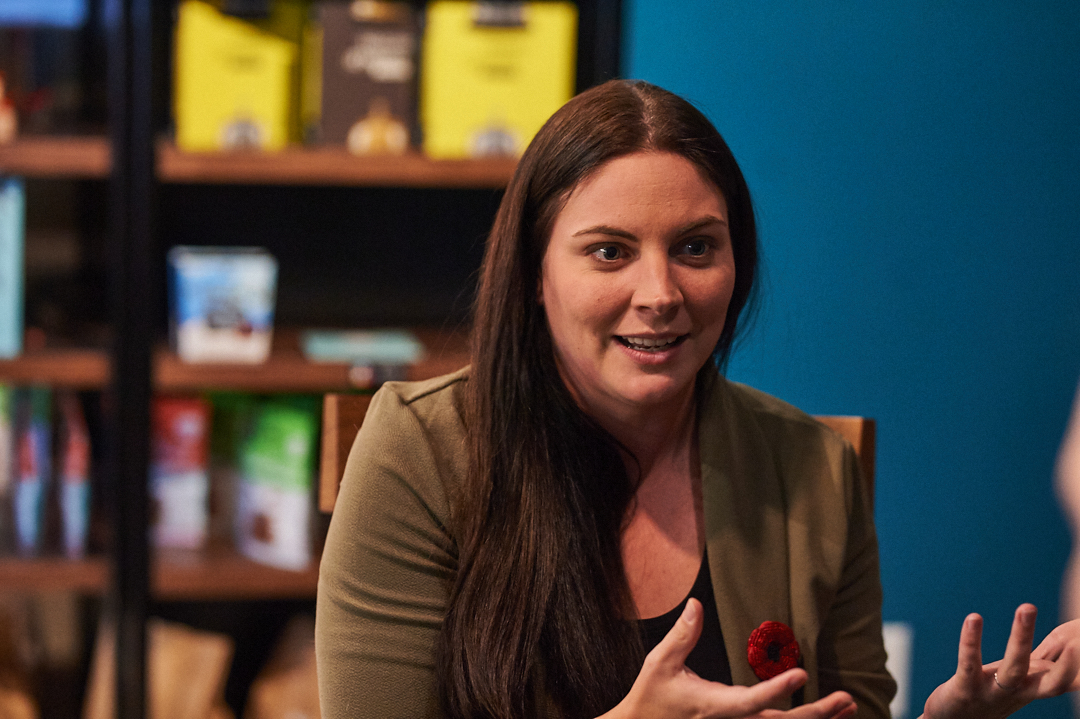 Jenica Atwin, Canada’s newest Green MP, has come out swinging against the powerful Irving family, saying New Brunswickers have been “surrounded by their influence” and must “get out from underneath their thumb.”

In a wide-ranging interview in Ottawa on Nov. 1, the first-ever Green elected outside of British Columbia also discussed banning a popular pesticide ingredient, and weighed in on Indigenous education, supporting oil and gas workers and balancing the Greens’ national mandate with an East Coast voice.

And she has a message for anyone talking "Western alienation" or thinking about separatism in Canada: “We’ve got a job to do. We’re Team Canada now. Let’s focus on that.”

Atwin doesn’t pull any punches when she’s asked her thoughts on the Irvings, the deep-pocketed family in her home province that has collectively controlled hundreds of companies and has a near-monopoly on media outlets. “We’re surrounded by their influence, that’s for sure,” Atwin, the MP for Fredericton, told National Observer.

“I don’t think that a monopoly is healthy for any economy, especially a smaller economy like ours. And so, we need to kind of get out from underneath their thumb. And I think it would provide so many more opportunities for entrepreneurship... there’s lots of room to grow, but currently we’re just kind of stuck in our status quo. Our media outlets are also closely linked to the Irving family,” Atwin said.

“So we’re tired of the way things have been, and we want to see a better relationship moving forward. I want to see communities like Saint John, for example — there’s a really high child-poverty rate. There are things that we need to do. And I want them (the Irvings) to be champions of that.”

On Western alienation: 'I believe in the federal model'

Atwin, a fast-talking, intensely focused individual, stands out in a town full of politicians and bureaucrats who can often seem like they’re talking past one another with glazed looks in their eyes.

The new MP has taken on the role of intergovernmental affairs critic for her party, scrutinizing the federal government's relations with provinces and territories, and which Atwin says should also involve Indigenous leadership.

She is stepping into this role at a moment of regionalism for Canada. Re-elected with a minority government, Prime Minister Justin Trudeau’s Liberals did not manage to win any seats in the Western provinces of Alberta and Saskatchewan. Meanwhile, the Bloc Québécois, which doesn’t run any candidates outside the Eastern province of Quebec, surged in this election to become the third-place party.

Atwin says she understands Western concerns about an economic downturn and the fairness of federal transfer payments. A transition to a low-carbon future, she argued, will help increase jobs, revenues and economic viability. Workers in the oil and gas sector have transferrable skills, and should be offered retraining programs or helped into entrepreneurial roles, she said.

“I want to make sure that they know that I have their back. I want to see them be part of this transition,” said Atwin. “It’s not just about that industry dying and everyone else going on the unemployment line. That is not the future, or the vision that I want to support, in no way, shape or form.”

Still, unity is key, said the new MP, and “any talk of separatism, any talk of alienation, is disheartening.” She added: “I believe in the federal model, I believe we can make this work.”

“I think we all really (should) just understand the responsibility we’ve been given as elected officials, do the job that we need to do, focus on the places where we align first and get that work done, and then work out the details in the places where we’re just so far apart in the months to come,” Atwin said.

A countrywide ban on glyphosate

Atwin is pushing for a countrywide ban on a controversial weed killer ingredient called glyphosate — a ban that she wants to see in the form of her own private member's bill.

U.S. juries have found that a popular herbicide containing glyphosate contributed to multiple people developing cancer after they sprayed it heavily over a number of years, bringing it into contact with their skin. There are thousands of such lawsuits, including one filed in B.C. Supreme Court last month.

National Observer has reported that Canadian authorities knew of dozens of "serious incidents" alleging cancer and a link to pesticides. Early this year, Health Canada rejected allegations that glyphosate poses a cancer risk to humans based on typical use, after undertaking what it said was a "thorough scientific review.” It upheld its earlier decision to approve its use for another 15 years.

“We could use silviculture, we could have job creation and stop raining pesticides from the skies. It’s something that, in New Brunswick in particular, it was a huge part of our provincial election in 2018. If I could get that national ban through with a private member’s bill, I would be so ecstatic.”

A representative from J.D. Irving Ltd. could not immediately provide comment when reached by National Observer and did not answer questions before publication. A request for comment to Irving Oil was not returned before publication.

Atwin is the first woman ever elected to represent her riding. She credits St. Thomas University’s environment and society program co-ordinator Janice Harvey, and Harvey’s husband — Green Party of New Brunswick leader David Coon — with giving her invaluable advice and support during her campaign, as well as credit to MLAs Kevin Arseneau and Megan Mitton and many others.

She sees her role in part as “balancing the Green party’s national mandate with that East Coast voice.” She thinks Atlantic Canada is too often left out of the conversation about the low-carbon transition. “I really feel like the Atlantic provinces can lead the way on that,” said Atwin, pointing to local green businesses in her riding, such as solar and tech firms.

Atwin worked with First Nations Education Initiative Inc., which represents 12 of 15 First Nations in the province, looking at dropout and retention rates and best practices at band-operated schools and high schools. She worked with Oromocto First Nation, in particular to do what she calls “community well-being initiatives,” things like working with elders, children and women at risk.

She says there needs to be more focus on the “positive aspects” of First Nations education rather than “negativity,” including “empowering Indigenous educators to be in that space, and to have a bigger voice,” as well as empowering Indigenous youth and encouraging their activism and critical thinking.

She also thinks a focus on telling the story of residential schools has made a difference, as well as a focus on language and culture that can help students understand their identity and build confidence, which she said helps in terms of mental health.

New Brunswick’s Enhancement Agreement, which Atwin describes as a reinvestment of tuition dollars into communities, is something she’d like to see replicated. “That’s an incredible model that I’d like to see throughout Canada because it works so well — it’s empowering Indigenous educators and Indigenous education directors,” she said.

Editor's note: This story was updated at 10:48 a.m. Eastern on Nov. 3, 2019 to correct that people from New Brunswick are commonly referred to as New Brunswickers, not New Brunswickians.

So proud to have Jenica as my

So proud to have Jenica as my representative and to have worked on her election team. Oh yes, go Jenica, go!!!

It seems that every time

It seems that every time there is an article about moving forward and concurrently moving away from the Irving New Brunswick monopoly situation that Irving has no comment to make. Never a comment, stay quiet, hope that all concerns pass ... stay silent,

Wow. What a breath of fresh

Wow. What a breath of fresh air!

New Brunswick has been run

New Brunswick has been run like a feudal fiefdom and the poverty and low wages show it. The power of this family is never challenged within the province and rarely on our so-called other national media. This young woman is brave and hopefully will at least start a public debate, But won't hold my breath to see this story in the rest of the mainstream media.

Mary I agree with most of

Mary I agree with most of what you write. However within NB the power of the Irvings and other large corporations is brought up in the provincial legislature, almost exclusively by our three Green MLAs. You are correct about the lack of coverage in the mainstream corporate media. the NB Media Co-op does cover these issues.