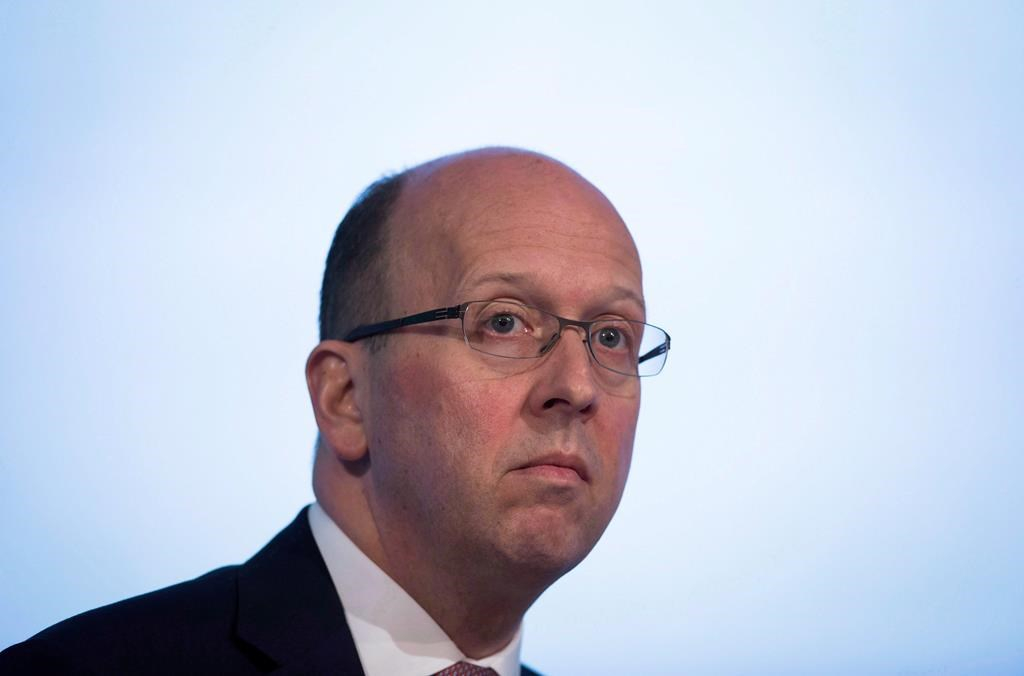 CIBC President and CEO Victor Dodig listens during the company's annual and special meeting of shareholders in Vancouver, B.C., on Tuesday, April 5, 2016. File photo by The Canadian Press/Darryl Dyck
Previous story
Next story

CIBC's chief executive Victor Dodig rallied support for Canada's energy sector, saying it's the country's "family business" and that the shortage of pipeline capacity represents a "critical threat" to our economy.

He added during his comments during a speech in Calgary that the Trans Mountain pipeline expansion project must be done without further debate in parliament or cabinet, as it is "unambiguously in the national interest."

"We all know it, the importance of building the Trans Mountain pipeline and getting it back into private hands cannot be overstated, ideally with the Indigenous communities playing an important role in the ownership structure."

Dodig added in his comments at the Economic Club of Canada on Friday that Canada not only needs to maintain its position as a leader in "responsible energy development," but grow it for "the benefit of Alberta and all Canadians."

His comments come one day after Encana Corp. announced it was moving its corporate headquarters from Calgary to the U.S. and changing its name to Ovintiv Inc.

"We need to now start bringing head offices back to Canada," said Dodig. "It's a great place to work and live, and we need to convince people of this... We just need to get that message out."

He added that Canada needs to build a modern, regulatory framework that allows projects to be built "in good time."

Dodig also said the country must play a role in addressing climate change, suggesting a tailored tax credit that would encourage both carbon capture and sequestration, similar to a measure that already exists in the U.S.

Canada's current commitment under the Paris climate change accord is to cut emissions to 513 million tonnes annually, but the most recent measurements show in 2017 emissions were 716 million tonnes, with the Alberta oilsands accounting for about 70 million tonnes.

To meet the United Nations targets, Canada would have to get to closer to 385 million tonnes.

The National Energy Board in 2016 said the production of another 590,000 barrels of oil, which would maximize the twinned pipeline's capacity, could generate 14-17 million more tonnes of greenhouse gases each year. That production could happen with or without the expansion, the board noted.

This report by The Canadian Press was first published Nov. 1, 2019.

Companies in this story: (TSX:ECA)

'It's on:' Kenney vows to counter Texas efforts to lure Canadian companies south

Encana CEO says Canadian oilfield would produce more if regulated in the U.S.

There is no such thing as

There is no such thing as responsible energy policy that includes development of oil reserves or selling more oil. This guy's comments are typical of the new efforts at pretending climate change action. His comments are irresponsible and dangerous. He has clearly not read or totally dismissed the science that tells us we need to cut emissions in half by 2030 and to zero by 2050 if we have any chance of surviving as a civilization or a species. The CIBC needs to recognize that they too will also not survive.

Like all of the oil sand’s Bay Street cheerleaders, this Canadian bank CEO didn’t disclose his bank’s direct financial exposure to the oil and gas sector. Hopefully, efforts underway in securities law for improved transparency will make those disclosures mandatory in the future.