Squamish Nation-led housing project in Vancouver to double in size 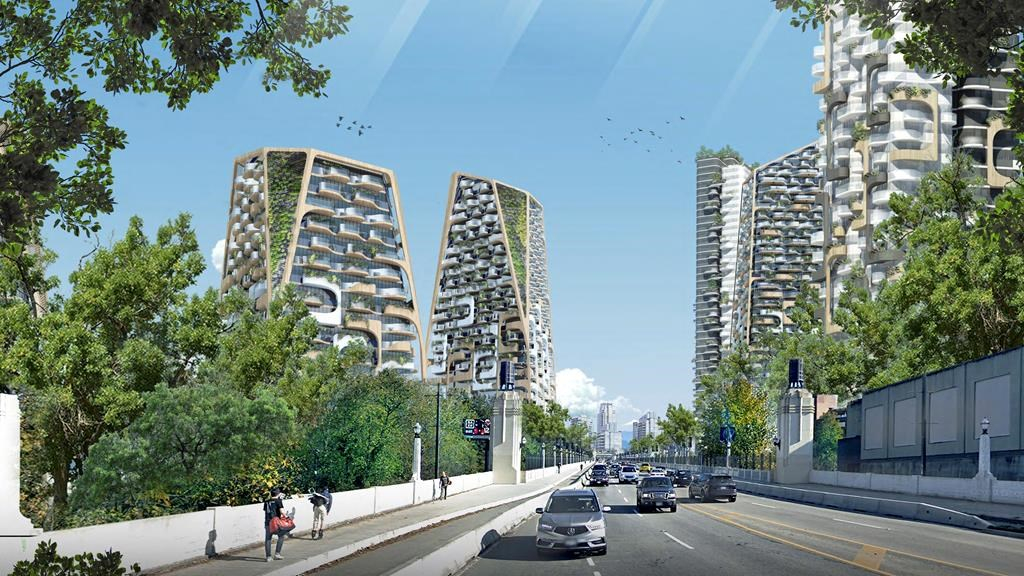 One of the largest Indigenous-led urban development proposals, as shown in this handout illustration, in Canada that is set to rise in the heart of Vancouver is expected to double in size with 6,000 units planned. Handout photo by Squamish Nation
Previous story
Next story

One of the largest Indigenous-led urban development projects in Canada that proponents hope will rise in the heart of Vancouver is set to double in size with 6,000 units planned.

Khelsilem, a Squamish Nation councillor, said the proximity of the project to downtown Vancouver is among the reasons for the larger-scale development.

"We have a fiduciary responsibility to achieve the highest and best use when we do projects," said Khelsilem, who goes by a single name.

"We have to bring back the best value for our members because otherwise they're being robbed from the potential value that can be created on the land. So we pushed the density to what we think makes sense both from a land-use perspective and we also think that providing a significant amount of rental space will be a positive opportunity."

The Squamish Nation is planning to build 11 towers at the south end of the Burrard Bridge near Vancouver's False Creek, with the tallest being 56 storeys high.

Khelsilem said the units will be mostly rental with a preference for Squamish Nation members, and will include subsidized and affordable housing units.

"Because we are proposing mostly rental we see opportunities to do some really interesting stuff around amenity spaces for tenants within the building, on those really beautiful vistas that might be on the roof or the really top part of the buildings," he said. "We want to create a strong sense of community in these buildings."

The team is planning the "highest level of energy efficiency" and aims to limit the amount of parking so people use public transit and reduce emissions, he added.

While the project, known as the Senakw development, does not need the city's approval to go ahead, Khelsilem said the team has been having conversations with the city and are "excited" to work with it.

"We find (the city) to be very helpful and supportive," he said.

"What exactly we might share decision-making on or how they might be involved is to be determined but we are open to a lot and to working with the city because they are experts in a lot of ways."

He said the team will work towards a service agreement with the city to provide municipal services such as water, sewers and waste removal.

The city has maintained that the Squamish Nation would not be required to apply to redevelop the area.

"If they do proceed with a project on these lands, we would look forward to continuing our long-standing relationship and work with them to support their integration with the existing community and city service connections," it said in a statement.

The Canada Mortgage and Housing Corporation said in a statement there are funding programs that could be explored under the national housing strategy for a development such as Senakw and the corporation would be interested in exploring them.

The 4.7-hectare area of the now proposed project was originally home to members of the Squamish Nation for thousands of years before they were illegally forced to accept a settlement and moved to less desirable land along Howe Sound in 1913.

After lengthy legal battles, in 2002, the Squamish Nation regained a small section of the earlier reserve, which is today Kitsilano Indian Reserve No. 6.

The Squamish Nation had planned on developing the land about 10 years ago but halted the process because of the economic downturn.

Khelsilem said the development project was restarted after gathering pitches through a request for proposals about three years ago.

On Dec. 10, members of the Squamish Nation will decide whether to go ahead with a 50-50 profit-sharing partnership with Vancouver developer Ian Gillespie of Westbank Corp. who will build it.

The project is expected to cost just over $3 billion with a significant amount of money coming from federally backed loans, he said.

Construction is expected to start in early 2021 and finish by 2026 or 2027, he said, adding moving in will be phased over a number of years.

Khelsilem said it "remains to be seen" what opposition there is to the project.

"I think any time there's a project like this there's a conversation to be had around impact and benefits and I think there's a lot that the Squamish Nation is going to be giving back to the city in terms of park space, rental and affordable housing," he said.

"People may have issues with some parts of the project but we're open to that conversation and finding out what we can do to improve that project."