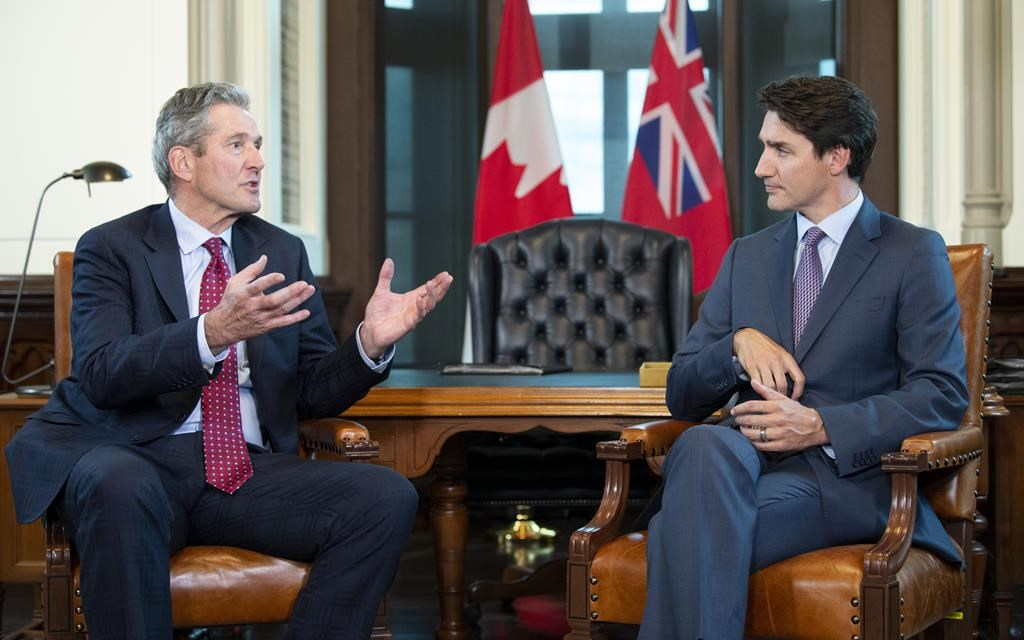 Manitoba Premier Brian Pallister says the prime minister must help unify the country by ensuring the Trans Mountain pipeline expansion is built so that western oil can get coastal access to overseas markets.

The pipeline, the economy and crime are three of the things on Pallister's agenda for a one-hour meeting with Justin Trudeau set for Friday in Ottawa.

"We've got to get the pipeline built," Pallister said in his office Wednesday.

"I would say that it's indelibly etched in my understanding that you can't have social progress without economic progress."

Pallister has dismissed talk of western separation and has not been as strident as the premiers of Saskatchewan and Alberta recently in criticizing Trudeau. Still, he appears to be putting much of the onus on the prime minister to mend the country's fences.

He accused Trudeau of picking fights with premiers and pointed to reports of high suicide rates in Alberta's oilpatch since the industry downturn.

"You're talking about an incredibly stressful situation in the province of Alberta," he said.

"We need to make the country work better, and the concerns that people have in Alberta and Saskatchewan — and elsewhere — can't be ignored. They need to be addressed.

"The prime minister has said so following the (federal) election, but deeds matter more than words, so it's time for action."

The Prime Minister's Office said in a statement Wednesday that Trudeau hopes to soon have one-on-one meetings with all premiers, including Pallister, "to work on shared goals and make life better for all Canadians."

Pallister said he also wants Ottawa to walk back recent changes to environmental rules that pipelines and other projects must address before they can go ahead. The same legislation threatens flood-protection projects and hydro development that Manitoba needs, he said.

Pallister further plans to discuss crime and public safety with Trudeau, given a recent spike in homicides and other violent crimes in Winnipeg.

Other topics include the provinces' desire for more federal cash for health care and Quebec's ban on public servants deemed to be in positions of authority from wearing religious symbols.

Pallister has called the ban un-Canadian and a threat to people's freedom and has promised to reach out to bilingual Quebec civil servants who dislike the ban and may be willing to move to Manitoba.

One item not on Pallister's agenda is the federal carbon tax. Ottawa has imposed a tax on Manitoba and three other provinces that refused to bring in their own price on carbon. Manitoba has filed a court challenge of the tax. Saskatchewan and Ontario have lost similar court battles but are appealing.

Pallister said he doesn't plan on being the one to bring up the topic.

"I might anticipate that that'll be something the prime minister may want to address."