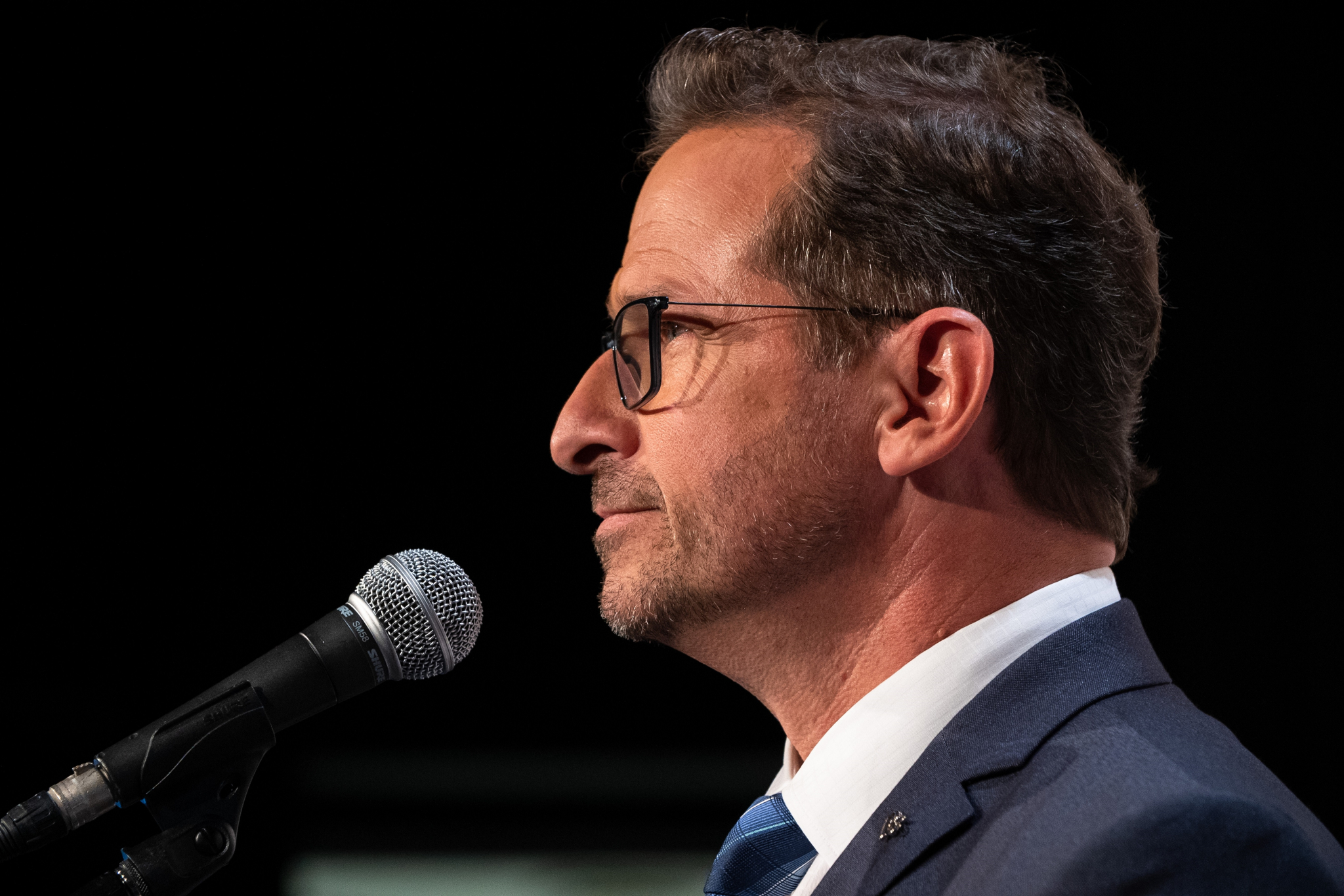 File photo of Bloc leader Yves-François Blanchet at the leaders' debate in Ottawa in October 2019. Photo by Andrew Meade
Previous story
Next story

The leader of the Bloc Québécois says Western Canada’s need to “obsessively want to extract oil from the ground” means it is difficult for his party to help further any separatist sentiment there.

“If they were attempting to create a green state in Western Canada, I might be tempted to help them,” Yves-François Blanchet told reporters in Ottawa on Wednesday, following a meeting with Prime Minister Justin Trudeau.

“If they are trying to create an oil state in Western Canada, they cannot expect any help from us.”

Blanchet’s rendezvous with Trudeau is one of a string of meetings the prime minister is holding with political leaders following his minority government’s election and ahead of a new Parliament scheduled to open in December.

The meeting appeared to go smoother than one Trudeau held with Saskatchewan Premier Scott Moe the day before. Moe emerged from that meeting by dismissing the prime minister’s words as “more of the same,” before calling for more autonomy for his province.

Blanchet, however, left his meeting saying he was open to collaborating on Liberal government proposals to tackle climate change. The Liberals are 13 votes shy of a majority needed to pass legislation on their own, and with 32 seats, the Bloc is in a position to lend a helping hand.

“When there will be some initiatives brought forward in order to reduce our emissions to improve the huge problem of climate change, we will be open to discussion,” said Blanchet.

“However, each and every time, we have the duty to remind this government that they are also promoting the extraction, exportation, and consumption of oil throughout the world, which is destroying the effect of what they are trying to do on the other end.”

The Bloc leader was asked by a reporter whether he might have a message for people in Alberta and Saskatchewan, given that Blanchet appeared to get along with Trudeau better than Moe — even though Blanchet is the one leading a party committed to sovereignty.

Blanchet reaffirmed his commitment to Quebec independence — "I still believe that Quebec will do better when it becomes a country” — and so he said he will not be the one “that will fight to have a nice, beautiful and united Canada.”

The problem, he said, was the West's reliance on fossil fuels.

“I will not help some parts of Western Canada that could dream of some kind of — maybe (I won’t) go as far as (saying) ‘independence,’ maybe they are only building a strong position for themselves — but, I am not in a position to tell them what to do or not to do," he said.

"And, through national or international channels, we will keep fighting this idea to obsessively want to extract oil from the ground, and make the planet warmer.”

The Conservative Power Corridor - Not!
There is no national unity problem only some noisy Conservatives trying to break up the country. And, as far as the energy corridor is concerned it is more of their BS. Montreal and points east get their oil by bulk tanker at a fraction of the cost of a pipeline!

On the other hand, PQ has a surplus of hydroelectricity. They have a cap and trade deal with California worth billions now but California is planning on shutting down their two coal-burning plants by 2022 meaning they won't be putting the coin into cap and trade they will be looking for a return.

This falls in line with PQ suggestion that western Canada enter into cap and trade deals with them and they will forget about equalization payments. A scam running every which way.

Alberta's power is owned by the cities, Indirect taxation if you like. But, it delivered at a reasonable price. Cities are in no position to buy PQ power! It would seem we have more in common with China than with Quebec!

Eating meat while sneering at

Eating meat while sneering at the butcher.

I suppose Bombardier's private jets run on fairy dust? Were the millions of cubic metres of concrete for those hydroelectric dams made with cement that was baked with natural gas, or was it daisies?

Massive carbon consumers do not get to spit on the carbon producers that they depend upon.

It's telling that you did not

It's telling that you did not mention the role of fossil fuels in road transport. The bulk of Alberta oil is going into the gas tanks of suburban commuters, mostly in Western Canada and the US. The breaking point for the oil paradigm may well be today's higher world prices, but that is sure to be catalyzed by the advent of the $30,000 (CAN) electric car somewhere around the mid-2020's. VW is spending 30 billion Euros to retool for electric vehicles and it may the first company to breach that price floor. Toyota is also planning to release half of all world production as EVs right at that same time. The writing is on the wall.

There are tried and true programs to displace up to a third of the Portland cement content as well as some of the aggregates in concrete with waste products from industry, such as fly ash and smelter slag. I worked on projects 15 years ago that won awards for reducing the CO2 in concrete by 35% through these methods, and the concrete was actually 65% harder as the result. You can also embed captured CO2 directly into the kiln as the limestone mix is tumbling, locking in even more carbon forever. Moreover, research is ongoing into electric induction kilns run on renewables for Portland cement, as well as electric arc furnaces for making steel.

There are many benefits of a national smart grid for clean electricity. Only about 3% of the power is lost through resistance every 1,000 kilometres with low-impedance, high voltage direct current transmission lines. That means that through the advantages of differential time zones BC can send hydro power east during the morning rush hours at cheap nighttime rates. The flow can be reversed where Quebec / Ontario hydro and nuclear power are sent to the peaking West at non-peak rates. The power can also be used to energize zero emission high speed trains along population corridors and nodes in the same corridor to compete directly with short and medium haul flights. This was highly successful in the EU.

I'm not sure what it's

I'm not sure what it's "telling" about, that I didn't mention transportation. "Industrial heat" is also over 20% of all carbon emissions. "Farming" is nearly a quarter of all GHG releases, and I didn't mention that either; I'd mention that before transportation in such a discussion, as Alberta does not manufacture any cars. That would be Ontario. It does not manufacture giant bunker-fuel run cargo ships and cruise ships, either, it doesn't even have any, being landlocked. It does not manufacture airplanes, like Washington and Quebec. All of these places have industries that create more carbon consumption, and thus demand for carbon production. I have no idea why people will lie down before a pipeline, but not before an airport expansion, or a new car dealership.

Thank you for working on that concrete; that was one early R&D project - CarbonCure wasn't founded until 12 years back. It's now an installed technology - in Calgary, at BurnCo. No buyers in Quebec, yet.

And if it exists, why isn't it mandatory? Surely that would do far more than forbidding some pipeline somewhere. I doubt that the carbon tax is even levied upon those who purchase concrete and put water in it, causing the CO2 release. I'm sure it's just ignored, though the concrete plant would be dinged for their use of natural gas to bake the limestone.

You have to choke off carbon DEMAND, is my point. Surely 40 years of drug war has shown that even an illegal product, much less fully-legal carbon, cannot be halted by suppression of the producers, only by negation of the original demand.