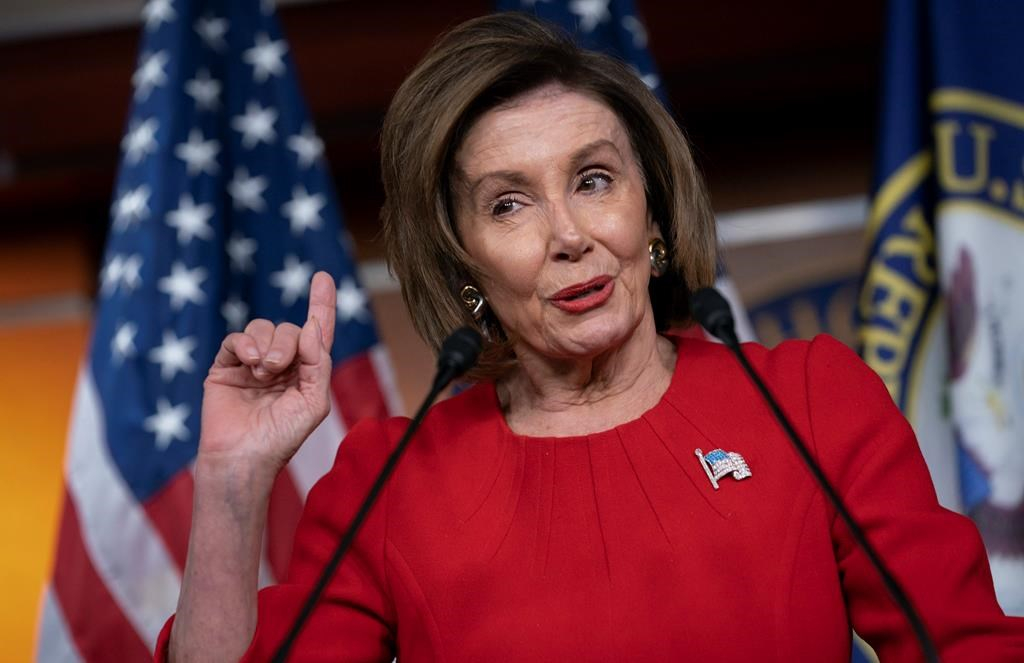 The most powerful Democrat in the United States Congress says she believes lawmakers on Capitol Hill could vote on the new North American free-trade agreement before the end of the year.

Nancy Pelosi, the Speaker of the House of Representatives, says there has been progress between congressional Democrats and Trump administration officials as the two sides seek agreement over tougher enforcement of the U.S.-Mexico-Canada Agreement's labour and environmental protections.

She says the talks are moving "positively" and suggests a deal is "imminent."

The retooled version of NAFTA, signed by the leaders of all three countries late last year, has only been ratified by Mexico thus far. The federal Liberal government has indicated it plans to follow the U.S. lead, ratifying the treaty around the same time the Americans do.

"We're in a good place," Pelosi told her weekly media briefing Thursday — a news conference that was otherwise dominated by talk of the impeachment proceedings against U.S. President Donald Trump.

"I want this to be a template for future trade agreements, so that the work we put in here will not only have a benefit for the USMCA, but for the globalization discussion in general... I'd like to see us get it done this year; that would be my goal."

Dan Ujczo, an Ohio-based trade lawyer who specializes in Canada-U.S. matters, said while he believes it is likely the Democrats in Congress and the Trump administration could announce a "handshake deal" in the next week or so, the congressional gears must grind at their own pace.

Stakeholders will have to spend time evaluating the deal, Ujczo said — a process that's likely to take place next month while Congress is seized with the spectacle of an impeachment trial.

"The spirit is willing to get a deal done this calendar year, but the legislative calendar is weak to get these discussions done."

Nor are Liberal government officials holding their breath, given that both the Democrats and the U.S. Trade Representative's office have been signalling for months — both publicly and privately — that they have been making progress and are close to a breakthrough but haven't actually achieved one.

Pelosi said that while a lot will hinge on the language in the forthcoming implementation bill, which is the legislation to formally enact the agreement, she expects organized labour in the U.S. to be on board with what the Democrats have negotiated.

"We'll see what the implementation is, what the enforcement is, and I think it will be a value that is shared by our friends in labour as well as the Democrats in the Congress," she said.