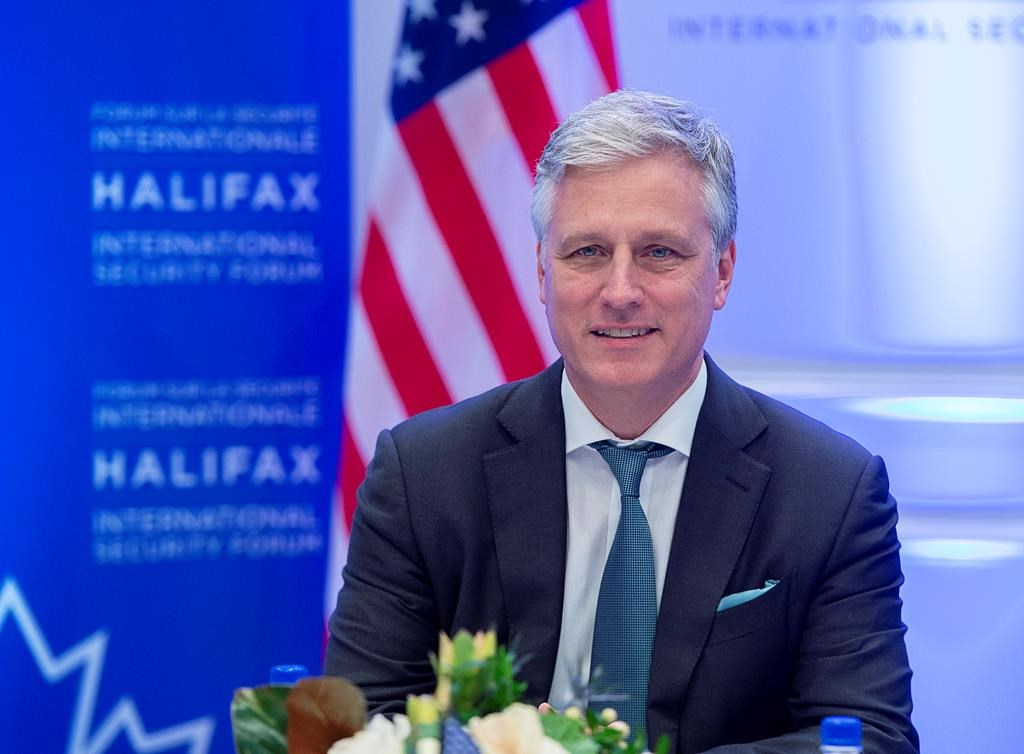 Donald Trump's national security adviser has issued a dire warning to Canada about Chinese telecom giant Huawei, saying Ottawa should reject the company's plan to deploy its 5G network because the technology would be used as a "Trojan horse" to undermine national security.

"What the Chinese are doing makes Facebook and Google look like child's play, as far as collecting information on folks."

He said the Chinese state could use data scraped from its 5G mobile network to "micro-target" Canadians with personalized texts aimed at undermining elections.

The national security adviser, who was appointed to the job in September, says the fallout from such an intrusion into personal data would have an impact on Canada's participation in the Five Eyes alliance, which includes the intelligence agencies in Australia, New Zealand, the United Kingdom and the United States.

"The Huawei Trojan horse is frightening, it's terrifying," O'Brien said on the first full day of the Halifax Security Forum, which has attracted more than 300 delegates from government, the military and the academic community.

"I find it amazing that our allies and friends in other liberal democracies would allow Huawei in ... I'm surprised that there's even a debate out there."

Chinese ambassador Cong Peiwu said that was a "groundless accusation."

"So we do hope the Canadian side will provide a fair, just and non-discriminatory business environment for Chinese companies, including Huawei," he told reporters during a roundtable discussion in Ottawa.

For its part, Huawei has stressed it is not a state-controlled enterprise and that it would never spy on behalf of China or any other country.

"We have been extremely mindful in protecting our current 4G technology and the decisions that we make regarding 5G will make sure that these systems are as strong as our current system, if not stronger," Sajjan said.

"We have the appropriate process and regulations in place to protect our infrastructure and Canadians. We are going to take our time so that we can appropriately examine all potential threats."

At the Halifax conference, which has attracted delegates from 70 democratic countries, O'Brien wasn't the only U.S. official taking aim at Huawei.

Earlier in the day, Republican Senator James Risch, chairman of the Senate committee on foreign relations, told reporters that Canada should think twice before getting involved with a company that he said is little more than an arm of the Chinese Communist party.

"When any information goes to Huawei, the Chinese Communist party will have access to that information," said Risch, who is from Idaho.

"Is it worth it, to save a bit of money by buying a cheaper system? My conclusion is a resounding no. I would hope that the Canadian government would reach the same conclusion."

U.S. Senator Angus King from Maine, who sits on the Senate intelligence committee, said if Canada allows Huawei to deploy its network, "it would make it very difficult to have full intelligence sharing ... with a partner who has installed a direct line to Beijing."

Relations between Canada and China have been difficult since last December, when Canadian authorities took Huawei executive Meng Wenzhou into custody over American allegations the company violated sanctions on Iran.

Wenzhou's extradition case is before a Canadian court. She remains under house arrest in Vancouver.

The arrests are widely seen in Canada as retaliation for the detention of Meng.

"The way that they're treating the two Michaels is not right," O'Brien said. "It's a wrongful detention in order to gain leverage."

On Friday, Cong demanded Meng's release, and the ambassador said her arrest and pending extradition to the U.S. amount to arbitrary detention.

This report by the Canadian Press was first published Nov. 23, 2019

By Meeru Dhalwala | News, Culture | November 25th 2019
The climate and the cook

No decision on Huawei and 5G before fall federal election call: Goodale

Unfortunate that the author

Unfortunate that the author chose not to contrast the potential for China to spy on Canada with the actual spying from the US' NSA. It wasn't long ago that the US government was exposed and shown to have engaged in massive, illegal dragnet surveillance of the domestic & international communications and communications records of millions of people worldwide since at least 2001 (with assistance from major telecommunications carriers including AT&T).
The hypocrisy of US officials' "warnings" is, as usual, rather stunning and the mainstream press just goes along.

Totally agree with you. Was

Totally agree with you. Was going to post something similar myself. Snowden revealed how much the USA is a 'rogue' state for spying - talk about the kettle calling the pot black!

Personally, I would prefer

Personally, I would prefer spying from China to spying from USA, which has a lot more commercial connexions to Canada and our companies. The US polititians and the National Security Advisor are all trying to scare Canada into buying US technology, which is not as advanced as the Chinese. They all work to Make America Great, and they are scared of China. Of course, we risk vengeance if we do not do what they tell us to do, but we must do what is good for Canada anyway; we will be having better technology than them.

"I find it amazing that our

"I find it amazing that our allies and friends in other liberal democracies would allow Huawei in ... I'm surprised that there's even a debate out there."

The debate is there because nobody can really trust the US any more. I find it amazing that this guy does not have the insight to realize that when you treat your allies like enemies, they come to reconsider what you really might be going forward. Trump changed the game, not the rest of us.

Well, it is good to know that

Well, it is good to know that there are now rivals to the once dominant Huawei 5G technologies. i think the Nokia alliance offers the best chance for a relatively neutral, mutually beneficial arrangement.
Under the Trump chaotic kleptocracy and the paranoid US agencies and politicians who seem hell bent on destroying their own nation from the inside; erstwhile allies must be as resistent to their blandishments and blackmail as to those comming from the Chinese hegemonic kleptocracy. Oh, and don't forget the Amazon monstrosity that is now making a bid for access to control of democratic voting systems. Yikes!!!!

And how exactly is today’s

And how exactly is today’s America a good friend of Canada?