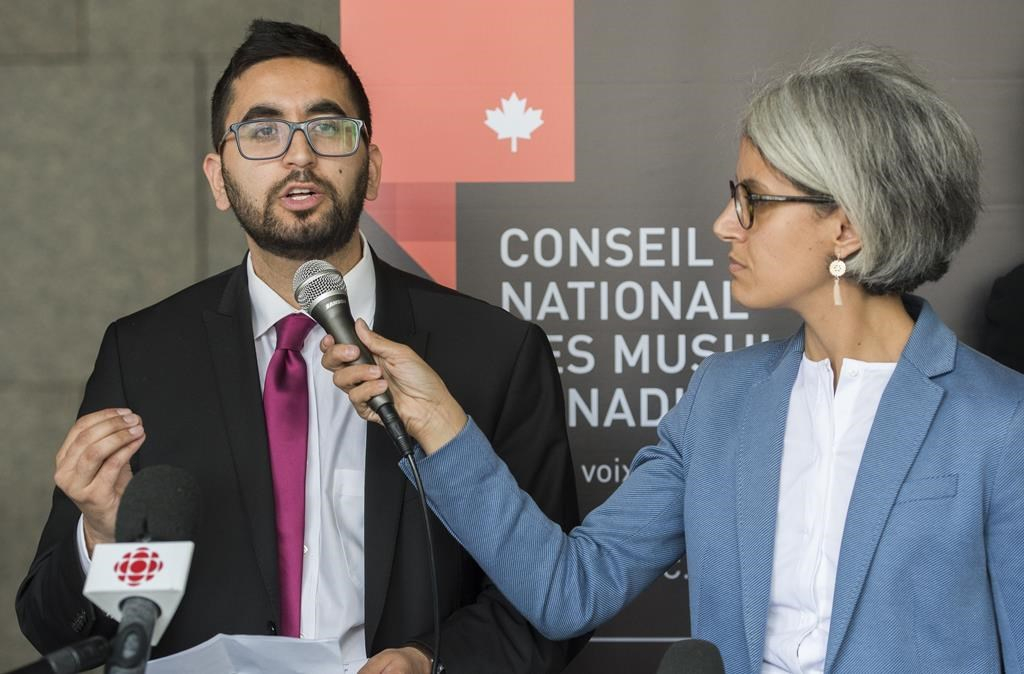 Quebec's secularism law has a disproportionate impact on women and is therefore unconstitutional, lawyers for opponents to Bill 21 argued in front of the province's highest court Tuesday.

A national Muslim organization, a civil liberties group and a university student who wears an Islamic head scarf are arguing the law is a direct violation of sexual equality guarantees in the Canadian Charter of Rights and Freedoms.

"This law was applied ... and the impact is overwhelmingly — if not exclusively — on women," Olga Redko, a lawyer for the applicants, told the Quebec Court of Appeal judges.

Quebec's secularism law prohibits public sector workers deemed to be in positions of authority, including teachers and police officers, from wearing religious symbols at work.

Redko is invoking Section 28 of the charter, which states the rights and freedoms in the document are guaranteed equally to men and women. The argument is a new one, which her legal team didn't invoke during their unsuccessful application to Superior Court in July.

Superior Court Justice Michel Yergeau ruled July 18 that the groups and the student failed to demonstrate Bill 21, adopted last June, was creating enough damage to warrant a stay of the central components of the law while their full legal challenge is heard.

Yergeau noted in his written ruling that the applicants were severely limited in their stay application because Bill 21 invokes the Canadian Constitution's notwithstanding clause. That clause prevents citizens from challenging the law for violating fundamental rights and liberties protected by the Canadian Charter of Rights and Freedoms.

However Section 28 is not covered by the notwithstanding clause.

Redko told the court Monday her legal team didn't raise Section 28 in the first instance because "the factual situation has changed." Since the law went into effect, she said, it became clear the vast majority of people affected are women who wear the Islamic head scarf.

"So far, the only people whose rights this law has infringed are women," Redko said, adding that she submitted numerous affidavits written by women who said they are suffering irreparable harm due to Bill 21. They can't find work or have had to leave the province, she said.

Arguing on behalf of the Quebec government, Justice Department lawyer Eric Cantin defended Bill 21. He said the government acted in the public's interest when it passed Bill 21.

This report by The Canadian Press was first published on Nov. 26, 2019.

It seems you can't win. The

It seems you can't win. The progressive argument seems to be that either way woman are being oppressed. It's that the argument? Not to mention the plethora of other offensives being alleged as violations if progressive thinking which, apparently, is the only "right way of thinking" to be permitted going forward and sometimes even looking back into the past. What a world we live in.

I have wonderful relatives in

I have wonderful relatives in Québec who support this law. I disagree with their zeal. Having themselves rejected the politically invasive power of Catholic dogma, the ubiquitous control of the priests and nuns, they feel justified in pushing through their version of secularism. They want to protect themselves from domination by anyone's God. I think that the Catholic priests would be laughing themselves silly. With Bill 21, the long-fingered priests have won, by silencing anybody else's display of their own faith. It completely lacks compassion, open-heartedness, inclusiveness. It is based on disdain and fear. It's a sexist and a racist law. I hope it gets shot down.

Quebec citizens who condemn the wearing of head gear (and other symbols of religion) are fundamentally wrong. Historically, women adopted head gear to repel the dirt that inevitably accompanied their nomadic lives. Men did too, hence the turbans and other styles of protective head gear men have employed over the millennia.

To this day I don't see any legislation requiring the removal of male headgear - except for certain archaic gestures of respect to courts, religions, and latterly for security inspections.

As for Islamic doctrine - the Koran reportedly does not require identity obscuring clothing or head covering. It prescribes "modest dress" for its female adherents - but so, throughout the centuries have many religions, tribes, institutions, societies, etc. Many European kingdoms enacted "sumptuary " laws, reserving to the aristoracy the rights to wear extravagant dress, certain rare dyes, laces, and bejeweled ornamentation, etc. Lower class dress was carefully defined so that the status of persons, from serfs to superior servants could be distinguished at a glance. Over time, as social mobility increased these laws lost their force but social dress signifiers have not been abandoned - hence our shorthand "blue colllar/white collar". We still use uniforms and occupational clues like "clerical collars" baseball caps, skirts, high heels and stockings, iconic agricultural and forestry wear... to make quick judgements about status.

What distinguishes female dress throughout this history is the punitive role, the moral judgements attached to female appearance and attire. Not even the centuries of high fashion, or couture have freed women from the moral strictureb and judgements levelled at transgressive women. We still hear the hateful "well she asked for it - dressing that way"! and so many other pejorative references to female appearance, bitchy!, butch!, sluttish, skanky,, and while there are some male equivalents , they pale in comparison to the quantity and vitriol directed at women.

Within this context it is easy to understand the frustration directed at the hijab, the burka etc.. It is almost amusing that the all-enveloping garments meant to nullify the "male gaze", and its connotations of lust and simultaneous denigration of women, should be so provocative of political male (and feminist) fury. The robes worn by both males and females in the middle east originated among the nomadic desert peoples for the same purpose, protection against daytime sun and dehydration and nightime cold. It is tribal costume and custom and predates Islam by millennia. Latterly, of course this tribal couture is a symbol of prideful identity and now in the era of tribal aristocracy, it has taken on the reviled meaning of social subjugation, male ownership, and the erasure of female participation in human rights.

To characterize this complex cultural history as merely an affront to western civilization is an insult to the ancient cultures of the cradle of civilization.

It is certainly true to the Islamists that this most visible and divisive symbol of the Islamic theocracy is the easiest target for attacking the religion. When all else fails (all the testoserone ignited posturing and dominance rituals) - blame the women!

This interesting argument presented to the Supreme Court - disproportionate harm to the female gender, should be recognized as the plea to eradicate the age old scapegoating of women Bill 21 represents