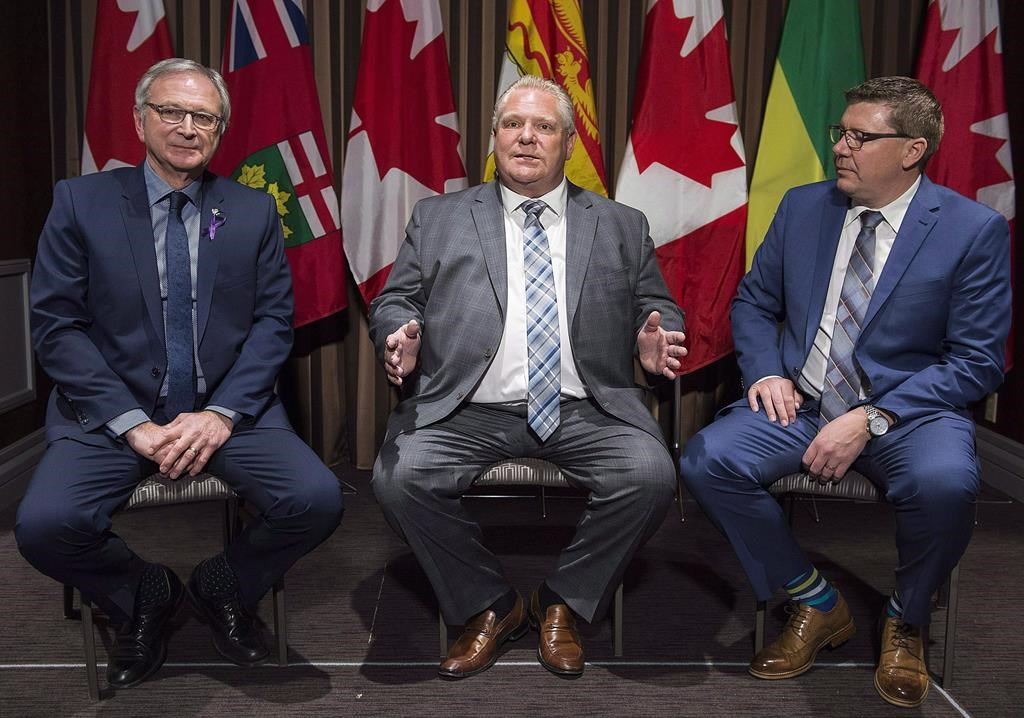 Three of Canada's premiers will announce Sunday a plan to fight climate change by working together on small nuclear reactors, a company that's developing the technology said Saturday.

New Brunswick-based ARC Nuclear Canada said in a news release that its president will attend a signing ceremony Sunday between the provinces of New Brunswick, Ontario and Saskatchewan to work in collaboration on the modular reactors "in an effort to mitigate the effects of climate change."

The Ontario government said Premier Doug Ford will meet with Saskatchewan Premier Scott Moe and New Brunswick Premier Blaine Higgs for an announcement at a hotel near Pearson International Airport on Sunday afternoon.

Moe said earlier this month that nuclear power has to be deployed in a big way around the world to significantly reduce greenhouse gas emissions, noting his province is well positioned to support more nuclear power with its large reserves of high-grade uranium ore.

All three of the premiers are opponents of the federally mandated carbon tax.

ARC Canada, which has its head office in Saint John, N.B., says its mission is to commercialize an advanced small modular reactor that it says "provides safe, reliable, economically competitive and carbon-free energy."

The company said it hopes the three provinces coming together will demonstrate the role the small reactors can play in helping Canada reach its climate change goals.

Moe has said that Saskatchewan will address climate change over the next decade by looking to carbon capture and storage technology and by increasing research efforts around small modular nuclear reactors.

However, the possibility of bringing nuclear power to Saskatchewan could still be years away.

After October's throne speech in which the alternative power source was also touted, Environment Minister Dustin Duncan said Canada could see small modular nuclear technology before 2030, but it likely wouldn't be in Saskatchewan as the province doesn't have any nuclear sites, unlike Ontario and New Brunswick.

In June 2018, the New Brunswick government committed $10 million to help establish the province as a leader in small modular reactor technology.

NB Power, which operates the 660-megawatt Point Lepreau nuclear generating station near Saint John, has said the technology can be scaled for designs with an output of between five and 300 megawatts. The units can be constructed and shipped to locations where they are assembled on site.

ARC Canada's website says its design "creates a 'walk away' passive safety system that insures the reactor will never melt down even in a disaster that causes a complete loss of power to the plant site."

This report by The Canadian Press was first published Nov. 30, 2019.

Is nuclear energy the key to saving the planet?

These twits are the lazy anit

These twits are the lazy anit-science, anti-ethical people who are always looking for the quick and dirty fix . They lack imagination, they are averse to rational thought, to constructive leaps of faith. They are wriggling on their self imposed hooks trying to change the terms of knowledge with their expensive, "cheap and nasty" solutions. Have they come up with a workable solution for safeguarding and storing the tons of nuclear waste that are poised to add yet more devastation to Canadian nature?

Some small modular power plants are designed to burn the spent uranium waste piled up at existing nuclear power plants over and over, effectively rendering them down over repetitive cycles to a glass-like material with a tiny fraction of the existing radioactivity, effectively allowing safer burial in repositories than that which has been envisioned. SM reactors will generate zero emission electricity for decades..

Ontario will have to deal with the waste problem imposed by its big nuclear plants sooner or later. Currently, the spent uranium fuel rods are stored in deep pools of water that have an eerie blue glow. There is no permanent solution in sight other than a deep repository in the Canadian Shield that needs to be geologically stable for thousands of years as the high radioactivity wears down.

Having noted this, the Achilles Heel of next generation nuclear is not safety or the waste per se, but cost. Renewables like wind, solar and geothermal are far cheaper. The Geological Survey of Canada estimated that the many forms of geothermal electricity production has a potential worth a million times the entire energy consumption of the nation from all sources. The intermittency of wind and solar will ideally be resolved through large-scale power storage with stable power availability at base-load levels. The most promising technology just over the horizon is liquid metal batteries that use common, cheap materials (i.e. not lithium), that are scalable up to district and city levels, and that have very high efficiencies and a long life. MIT is about to release one model called Ambri that is currently completing R&D and extensive testing. Moreover, this tech was invented by a Canadian scientist named Don Sadoway. Look up some of his online seminars and TED talks for inspiration and hope.

Although I am admirer of the

Although I am admirer of the Observer’s work on environmental issues, this story is riddled with errors caused by the author’s failure to inform readers that the technologies that the three premiers put forward as solutions to global warming do not exist. There are no commercially available “small modular reactors.” Nor are there any commercially available “carbon capture and storage” technologies.

Yet the Observer says that SMRs “can be scaled,” and “can be constructed.” Likewise the Observer’s paraphrase of whatever Premier Moe said about “looking to carbon capture and storage” leaves the reader thinking that this technology must already exist.

The belief that our global civilization will be able to come up with timely, scalable, and economically affordable solutions to whatever physical problems are facing us is, at the heart, a religious belief, not a scientific belief. By “religious” I mean a belief that is based on faith. We can hope that we come up with “small modular reactors,” or with “carbon capture and storage,” but the fact that we desire the existence of such technologies does not mean that scientists and engineers will come up with workable solutions.

The insidious nature of this faith-driven thinking is that it deflects our attention from dealing with the crisis before us with the tools and technologies that we already have at hand. There is every reason to pursue a broad spectrum of approaches to dealing with the climate crisis. But in the meantime, we should be basing our strategy for dealing with crisis with what we have at hand, not what we wish will be at hand in 5 or 10 years.

We are already paying the price for having wasted two decades in coming to terms with this crisis. The last thing any publication like the Observer should be doing is propagating the idea that our faith in developing new technologies will save us.