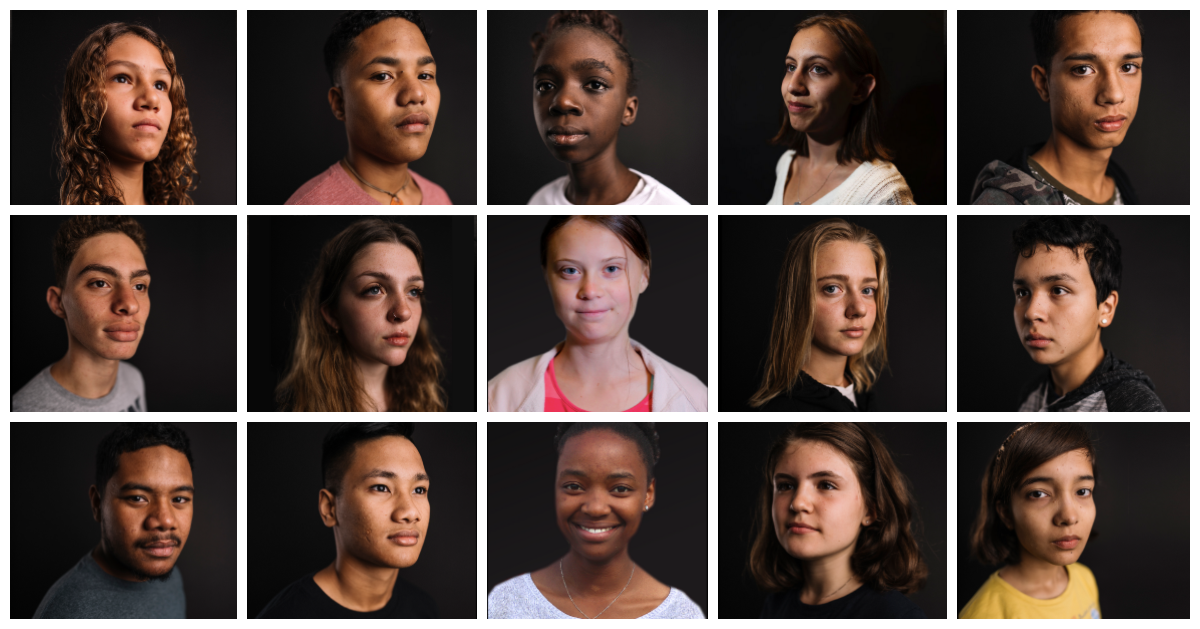 Swedish teenage climate activist Greta Thunberg and 14 other young people are calling on Canada to block any new oil and gas projects and move quickly to phase out existing production, saying that to do so would blaze a trail that other countries reliant on fossil fuel industries could follow.

The group of youth from across the world said Canada has taken a leading role globally in pushing for climate action, but must apply the same commitment domestically, in a letter addressed to Prime Minister Justin Trudeau and dated Dec. 10, Human Rights Day.

"Canada must apply its international climate leadership to all domestic action," the letter says. "It must demonstrate how a major fossil fuels producer and exporter can transition away from these pollutants, blazing a trail for other fossil fuel-reliant economies to follow."

They also wrote separately to Norway, another developed economy with a major and still-expanding oil and gas industry, with similar demands.

The group — which in September filed a complaint at the United Nations against Argentina, Brazil, France, Germany and Turkey — argues that climate inaction amounts to a violation of the rights of children, who will bear the brunt of the negative effects of a warming planet.

Trudeau has sought to align himself with Thunberg, who has galvanized the world’s young people to demand action on climate change after she started skipping school last year to protest outside the Swedish parliament. They met in September ahead of a massive climate march in Montreal, which they both took part in.

Canada is the world's fourth-largest producer and exporter of oil, which mostly comes from the oil-rich province of Alberta and mostly goes to the United States. The combustion of oil and gas releases carbon and other gases into the atmosphere, creating a greenhouse effect that traps heat and is leading to more frequent and more extreme weather events and rising sea levels.

Trudeau's government, which was re-elected with a minority in the October election despite strong opposition to its climate policies from Alberta and fellow oil and gas province Saskatchewan, has promised to achieve net-zero emissions by 2050.

The youth letter points out that to achieve that goal would require a block on all new projects.

Canada is currently considering an application from Teck Resources to develop the $20-billion, 260,000-barrel-per-day Frontier project abutting the Athabasca River in Alberta's northeast, which, if approved, would be the first new open-pit petroleum-mining construction in the country's oilpatch in many years. The government's decision is due by the end of February.

Canada "must demonstrate how a major fossil fuels producer and exporter can transition away from these pollutants," @GretaThunberg and other youth write in letter to @JustinTrudeau, calling for a block on all new oil and gas projects.

The letter also refers to other expansion activities, including the nearly complete 1,600-kilometre Line 3 pipeline between Alberta and Wisconsin, and the expansion of the Trans Mountain pipeline, which Ottawa bought last year and which, if built, would triple the capacity of that route from the oilsands to the British Columbia coast.

Canada "must end the development and export of new oil and gas reserves, and set a plan to quickly phase out existing production fields," says the letter, written by Michael Hausfeld, the youth group's legal counsel. "It must stop prioritizing short-term economic gains over the future of its children and all children around the world."

Four of the young people, represented by international law firm Hausfeld, come from the tiny Pacific island countries of the Marshall Islands and Palau, where rising sea levels risk inundating limited habitable lands, and where sources of freshwater used for growing food have already been infiltrated with salt.

The others come from countries across the world, namely Argentina, Brazil, France, Germany, India, Nigeria, South Africa, Tunisia and the United States.

The pressure from Thunberg and the others adds to Canada's growing legal challenges regarding climate inaction, with a group of 15 young Canadians filing a domestic lawsuit against Ottawa in October, while a separate group in Ontario took the Doug Ford government to court last month.

It asked that Trudeau respond within two weeks. His office passed a request for comment to Wilkinson's office, which said the government had made a lot of progress over the last four years, including $63 billion of investments in green infrastructure and clean energy, while acknowledging much more still needed to be done.

“Young people and Canadians across the country are counting on us for accelerated action on climate change," Moira Kelly, a spokeswoman for Wilkinson, wrote in an email. "We hear them, and all of the Canadians who sent a clear message this election, that continuing to fight climate change needs to be a priority.”

She said the government was committed to hitting the net-zero target for 2050, which it plans to write into law, and to exceed its 2030 targets under the Paris Agreement. To help it do so the government is pledging to plant 2 billion trees and create a $5 billion fund to electrify parts of the economy including the resource and manufacturing industries.

"We know we need to make a transition to a cleaner economy and we know that this will not happen overnight," she said. "We are committed to taking thoughtful solutions with Canadians to ensure that the clean economy is affordable for everyone."

Editor's note: This article was updated at 7:46 p.m. on December 9, 2019 to add comments from a spokeswoman for Environment Minister Jonathan Wilkinson.

I'm with Greta! How many

I'm with Greta! How many adult Canadians will join me?

I have a comment for Greta. Quit picking on Canada. We seem to be the worlds favourite whipping post. We only produce 1.6% of the worlds green house gases and have tough measures that will continue to reduce our overall measures. Go pick on the big emitters..namely, the US, China, India and leave us alone. Quit singling on Canada because our overall economy is RESOURCE based. Please research what that word means and how it’s important for the country and world!

Yes, we are resource base.

Yes, we are resource base. The issue here is not all about what ghg we produce domestically, though we rank in the top tier per capita. It is what we contribute to ghg emissions. What we export is exponentially adding to ghg emissions over what we produce domestically. Per capita we are one of the highest emitters of ghg. No, in the life cycle, the mining,/extraction, shipping, ( and in the case of fracked LNG, compressing for export),

Yep, we could be the world

Yep, we could be the world leader in being clean overnight...stop exporting any fossil fuels to the rest of the world.....send our economy into a deep depression...lose all of our resource jobs due to sky high and non reliable energy sources...yeah, we could all take one for the team but then there would be absolutely no change in ghg global emissions , as our customers would just pickup the shortfall from others...so in the end, we collapse our economy and make no impact on the world

And I have a comment for you, Mr. Wiebe! Please take a good look around the world and notice that we in this VERY RICH COUNTRY of Canada can very well afford to clean up our act and GET OFF oil and gas MUCH MORE EASILY than the other countries you have listed!!
Might I also direct your attention to the Green New Deal, which describes the whole paradigm shift required to make it all work!!
Please quit whining!

Ummm ... we've *never*, as a country, reduced our overall measures. Some provinces have done a fairly creditable job of it, but the amounts by which Alberta and Saskatchewan's GWG outputs have *grown* almost equals the amounts by which all the other provinces' and territories' GWG outputs have been *decreased*!
Other countries are singling us out, because we are at this point the Number One Poor Performer amongst industrialized nations ... all the while crowing at what "leaders" we are!!!

Actually, since 2005, both our population and economy have grown significantly in Canada and yet, our gig has decreased by 3% since that time. That has been a major achievement right there. Sure we could ban exports of all fossil fuels from the country, this would have net effect of zero on global emissions as our customers would just get it from other countries

Canada likes to think it has

Canada likes to think it has a reputation for being the country to look up to for ethical behaviour. We could easily lose that reputation. I, for one, would like to see this reputation improved; abandoning fossil fuels would be a step in the right direction.

My question to you is how

My question to you is how much are you willing to give up to stop production of fossil fuels. If the means massive unemployment in the oil and gas sector plus all of the spinoff jobs we would lose at least a quarter of our GDP...10-15% unemployment...reliability of power supply to less than 90%..soaring power costs...all the most expensive power to everyone...costs of all goods go up exponentially....i for one, don’t think that we are the problem of the world wrt green house emissions...when everyone is willing to give up all their electronics and TVs and streaming Netflix, them maybe I will support...may as well just shiver in the cold or sweat it out in summer with no air conditioning as I bike to the country farms 15 miles away to pick up my potatoes and carrots

And I thought that only the

And I thought that only the "left wing unreasonable radical environmentalists" were trying to scare people.

So are these the kids'

So are these the kids' numbers? Trudeau's? Kenney's? Are they correct? (".Line 3...boost Canada's oil production by 10 per cent. ...oil production projected to expand by 60 per cent...2040... gas production... to expand by 34 per cent...") Scary! A plan to cut GHG emissions at all in the face of those numbers seems tricky at best, never mind somehow (magic?) achieving net zero.