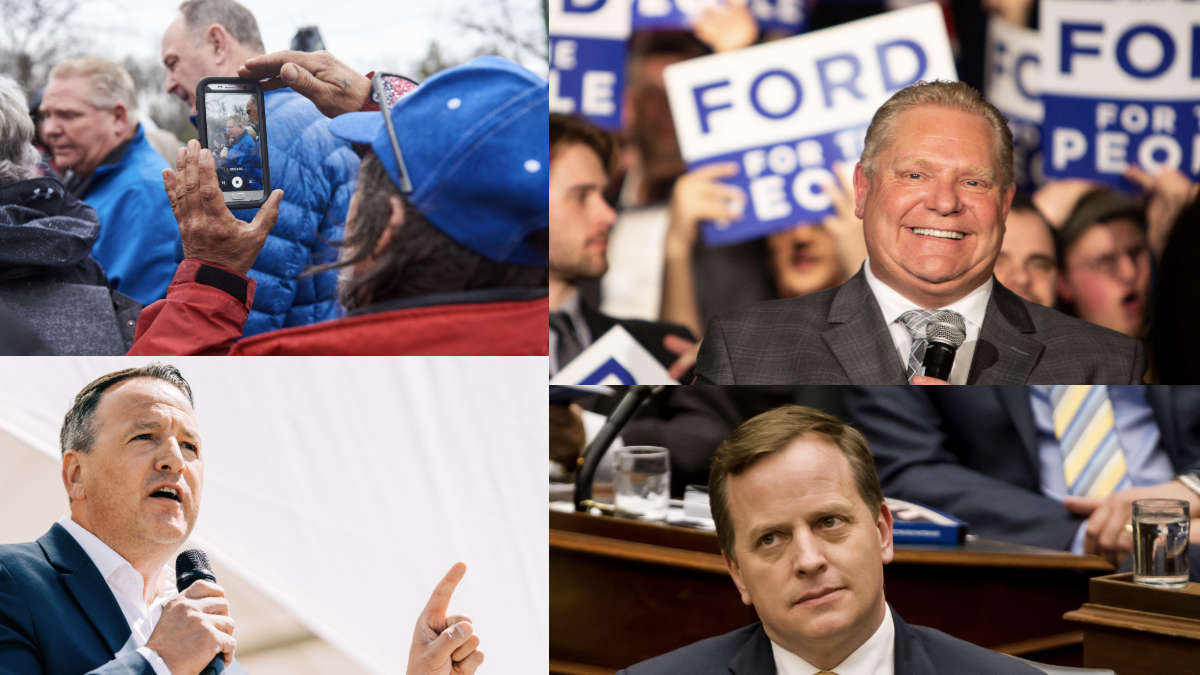 His popularity has plummeted in the 19 months since then, as he ripped up the province’s existing plan and failed to meaningfully replace it. Meanwhile, climate credibility grows more and more crucial to Canadian political success.

As the new year begins, the Ford government now faces a serious choice: double down and put its chance of re-election in 2022 in jeopardy, or pivot and risk alienating a shrinking base that cheers inaction.

“Clearly, (he'll) have to have an articulated (climate) policy in order to win the next election,” said John Wright, a former Ipsos pollster who is now a partner at Dart Insight and Communications.

What Ford has in hand right now is not that, but 2020 will offer several chances for a climate reset.

Ford’s policy replacement for cap and trade is an evolving draft, his environment minister said last month, after it was slapped down by the province’s auditor general for lack of “sound evidence.” The "Made-in-Ontario" plan makes a big deal about cleaning up litter and proposes little to reduce the pollution causing global warming.

Make no mistake, the Tories are not about to launch a climate plan Greta Thunberg would applaud. Anything they do will underwhelm the most fervently climate-focused voters. Those folks are likely looking to cast their votes for the opposition New Democrats, the regrouping Liberals or Mike Schreiner’s Greens anyway.

But the fact is this: a growing majority of voters actively seek out a government that takes climate action seriously.

Less than one-third of voters are indifferent to climate action (both in Canada in general and in Ontario specifically), and they already typically support conservative parties. A green turn would be one way to bridge the gap between that core and the remaining votes Ford needs to chase down, strategists and pollsters say.

“He has a lot of people — younger conservatives, millennial conservatives — who would be inclined to support him and support the federal party if there was more of a real recognition that climate change was something that needed to be addressed,” said Tim Powers, vice-chairman at Summa Strategies and managing director of Abacus Data.

“Climate is starting to matter to all conservative politicians,” says strategist @powerstim. “They recognize that the one-trick pony that was the carbon tax has gone to the glue factory and you can't ride that thing anymore.”

“Climate is starting to matter to all conservative politicians,” he said. “They recognize that the one-trick pony that was the carbon tax has gone to the glue factory and you can't ride that thing anymore.”

That creates some tricky electoral arithmetic for Ford and his Progressive Conservative strategists to consider.

Ford needs at least 38 per cent of the provincial electorate on his side to win a majority of seats at Queen’s Park next time around (he won with 40.6 per cent of the vote in 2018).

He is polling as low as 22 per cent recently, and almost a quarter of those who voted for Ford now have a negative impression of him, according to Abacus Data polling of 570 Ontarians conducted in mid-December.

“I would imagine that Doug Ford and his government will have to come up with something a little more plausible if they want to cover this exposed flank in the next election, because they’re not lined up with the mainstream on this,” said pollster Frank Graves, president of EKOS Research Associates.

“They’re lined up with their core constituency, but that may not be enough for them to find power next time.”

Retired firefighter Rick Browning is the type of voter Ford’s government will be looking to win back by 2022.

“I really got screwed, and I screwed myself by voting for the guy,” the 61-year-old resident of Napanee said. “I didn’t really understand at the time what cap and trade was, and I voted for him to cancel that.”

Skeptical of all politicians, Browning backed Ford because he remained angry at the Liberals for the gas-plant scandal, in which the cost to cancel two proposed natural gas projects near Toronto ended up costing taxpayers almost $1 billion. He thought the province needed a change of government and was willing to give Ford a chance.

But he soon regretted his decision, after discovering new windows he had ordered would not be eligible for an energy-efficiency rebate, meaning he’d have to eat the full cost. The consumer incentives to greener behaviour had been funded by revenue from the cap-and-trade scheme, which capped greenhouse gas emissions while allowing polluters to buy and trade exemptions. When it went, so did they.

Ford also killed incentives for the purchase of electric vehicles, cut funding for flood management and called off some 700 renewable-energy projects (including two wind farms that were already being built). His government has also passed legislation reducing protections for endangered species and encouraging urban sprawl.

Browning, a Young PC organizer in his youth who voted to re-elect Prime Minister Justin Trudeau in October, said he was “in the woods right now,” provincially — undecided on where he might place his vote next time around.

Even critics of Ford’s lack of climate policies acknowledge it wouldn’t take much to reach those just outside the party’s orbit.

Greenpeace Canada’s Keith Stewart said just getting behind rather than opposing federal climate plans would help them claim significant progress toward the province’s reduction targets.

“If Ford were to get behind Ottawa’s spending initiatives instead of fighting the plans, they could probably close a bunch of that gap,” he said.

“I could see that as a viable path forward, where it's basically the municipality doing the brunt of the work and Ottawa and Queens Park showing up with cheques.”

“I can imagine Ford on a shop floor with a bunch of auto workers saying we’re going to build stuff,” he said, noting a group of workers from the shuttered GM plant in Oshawa are pushing for it to reopen to build electric buses.

He said a long-shot scenario could see them pursue fossil fuel companies for damages related to climate change, similar to ongoing cases against tobacco companies and, more recently, pharmaceutical companies.

Ford has struck a conciliatory note since the October election, in which federal conservative counterpart Andrew Scheer and his equally limited green policy failed to oust Trudeau, in part thanks to seats the Liberals won in Ford’s Ontario.

“This is not the same government it was a year ago, putting stickers on pumps and screaming about the carbon tax and attacking the federal government,” said Wright, who likened the current rapprochement to the 1914 Christmas truce at the Battle of the Somme, where the warring sides put down their weapons to kick a football.

“There's no rhetoric, there's no incoming shells — everybody has toned it all down,” he said. “I think the stage will be set for the new year for some decisions to be made around the environment.”

If tone is to turn into constructive policy, money to pay for it could be expected to show up in the government’s next budget, slated for April.

“Infrastructure is where I would look for money to go. Climate infrastructure. That’s a nice bridging-the-gap measure,” Powers said.

One of the most pivotal climate events for Ford this year will be the pending Supreme Court ruling on Ontario’s challenge of the federal price on carbon, which Ford once called the worst tax ever.

If the country's top court agrees with lower courts and says it has no problem with Ottawa imposing carbon pricing on provinces that don’t reach a certain standard, Ford can choose to inflame anti-Ottawa passions or shrug, say he tried his best and move on.

Or he could use the ruling as justification to introduce a provincial version, which he could then use to fund a tax cut, said Peter Graefe, associate professor of political science at McMaster University.

But even if Ford’s government fills in the details on climate policy, it may face an uphill battle convincing voters it means anything.

“Even if he proposed a plan, would people accept it? Or would they see it as simply the next stage of delay?” Graefe said.

No doubt he will be able to

No doubt he will be able to fool a lot of voters again.

When I hear Elton's song

Or is it his little brother?

Or is it his little brother?

The guy from Napanee has it

The guy from Napanee has it right. His vote came from not being well informed. The chart showing Conservative values shows that is a big factor. Ford's slash and burn approach now exposes his ignorance too. I hope he's a fast learner but he has set us back more than a few years.