Teen girls took over the climate movement. What happens next? 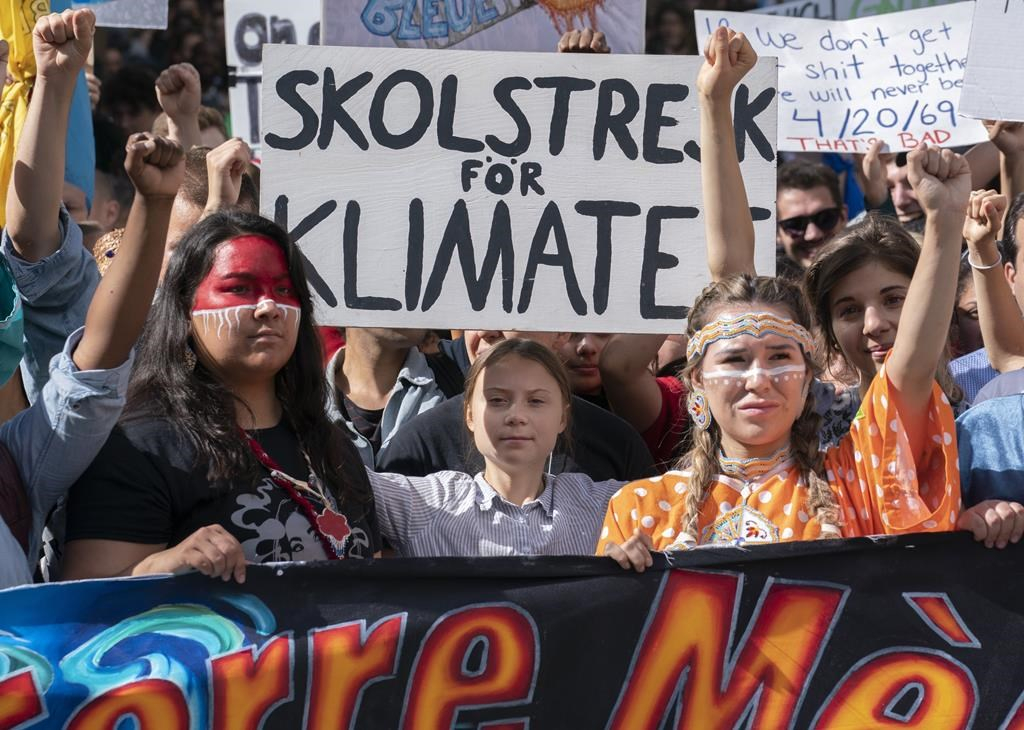 If you try to picture a climate activist over the past very long year, you will likely summon the image of a young girl. It’s not necessarily the stern Swedish one with pigtails. It could be the bespectacled daughter of one embattled Somali-American representative, the tall Latina from Seattle drenched and yelling at the first Youth Climate March, or a less nationally-known girl you happened to catch at the head of your local climate strike.

Whether you like it or not, the teenage girl has become the symbol of the climate movement. They have demanded to be seen, heard, and heeded, and they’ve at least gotten their way with the first two. There is a reason that Greta Thunberg, founder of the school climate strikes and not yet 17 years old, is Time’s Person of The Year and that Alexandria Villaseñor, the 14-year-old founder of Earth Uprising, spoke at COP25 in Madrid. Quannah Chasing Horse and Nanieezh Peter, 17 and 15, also traveled to Madrid to advocate for climate justice in their homeland of Alaska.

But it’s that third item on their wish list, that pesky “heeded” part, that remains elusive. Thunberg has insisted over and over again that she doesn’t want attention, she wants action. Villaseñor was horrified by the rather spectacular collapse of the international climate summit she crossed an ocean to attend. None of these girls is content with the mere spotlight, and rightfully so — they want leaders to make swift, meaningful overhauls to national economies and infrastructure, and that hasn’t happened.

A high school girl has a uniquely precarious place in American society. She doesn’t have a voice in the political system, but she’s depended upon heavily as a consumer. She gets the message that she should be empowered and confident and generally sans fucks, but the grown women she sees on Instagram are digitally and surgically altering everything from their rib cages to their cheekbones to look like composite Kardashians. She knows how to use social media to be heard, but she can also be tortured by it. And maybe most overwhelmingly of all, she knows that the world she’s going to grow up in is going to be much more chaotic than the one her parents expected, and she had no role in making it that way.

Hava Gordon, a sociologist at Denver University who studies gender and social movements, described a dynamic where teenage girls today are looking at the world they’ve been left and realizing they’re completely ostracized from the power structures that could change it. So they’re using what they can to get noticed, and it’s working pretty well.

“Most teenage activists don’t have the right to vote or run for office just yet,” she said. “So they’re harnessing media and social media in really interesting ways; they’re also finding their institutional leverage with schools and school strikes as well.”

Teenage girls have long been defined by their obsession of the hour — and long been the object of a good deal of American cultural obsession themselves. The current iteration is the VSCO girl, the Instagram-centric trend characterized by ‘90s-revival style and a surprising environmental ethic. Kate Aronoff reported on the VSCO girl’s climate enthusiasm for The Intercept in September and noted:

It’s not as if all VSCO Girls are sleeper climate champions. But as climate organizing has come to involve more and more people, it’s sucking the trends of the day up with it, as those trends in turn reflect the concerns and anxieties of the generation from which they’ve sprouted.

You see all kinds of variation in the way young women use the tools they have to be heard. Alexis Ren, the 23-year-old American Instagram model, has made a recent attempt to awaken the millions of followers devoted to her bikini shots to the destruction of coral reefs in the North Pacific. Meanwhile, Thunberg, who seems much more comfortable in a zip-up hoodie than a high-rise French cut, has certainly become the best-known girl climate activist in the country due in part to her savvy use of Twitter.

Thunberg’s prominence has only been boosted by one Twitter-obsessed president’s snide comments about her, where he characterizes her as a weird, petulant, tantrum-throwing child. (Even the least astute psychologist might be able to identify this as “projection,” but that’s neither here nor there.) And the young girl’s ascent has been accompanied by her very own religious iconography; in October, her face was painted across a building in San Francisco like a cathedral mural. She’s even released a short book of her speeches, a kind of pocket scripture for the modern-day climate disciple.

Thunberg has said she doesn’t want to be the center of attention; she just feels obligated to use her platform to advocate for change. It calls to mind an earlier pioneering environmental activist: Rachel Carson, who was 55 when she published Silent Spring in 1962. In What a Book Can Do: The Publication and Reception of Silent Spring, Priscilla Coit Murphy describes the writer and scientist’s desire to remove herself as a character from the conversation about her landmark journalistic work revealing the impacts of DDT. But despite the enigma Carson fought to maintain, she remained a focus of the press: “Carson herself was a classically appealing protagonist, despite her best efforts to remain private,” writes Murphy. “Much of the news coverage began with a description of her appearance and various qualities: ‘shy,’ ‘petite,’ ‘soft-spoken,’ or less felicitously, ‘spinster,’ or ‘bachelor biologist.’”

Movements of outspoken women have been fascinating to the public at the very least since suffragettes, and that fascination runs the gamut from religious adoration to cruel denigration. And yet many social justice efforts throughout history have been predominantly women-led; the most recent examples are the Black Lives Matter and Fight for $15 movements. Why women? Gordon describes a theory that we’re socialized to mind the home — keep things orderly, functional, and pretty — and that that cultivated instinct carries over to, well, the entire world.

But the suffragettes were doing their thing over a hundred years ago; this is not new! I asked Gordon why the surge of teen girl climate activists seems so novel. She mentioned two things: They’re younger than most women leaders before them, and we continue to be surprised by women who lead social movements because we don’t see that dynamic represented in the halls of power. Just under a quarter of Congressional representatives are women, and just under 30 percent of state-level elected officials are women.

“You can look at a teenage boy activist and think, ‘He’s gonna be president or a senator, this is good practice for him!’” said Gordon. “But the public doesn’t look at young women and girls that way.”

Alexandria Ocasio-Cortez is a notable exception to the accepted model of legislator: young, female, Latina, internet–fluent, and, of course, unapologetically outspoken. She’s also been a vocal advocate for both young teen climate activists and comprehensive and transformative climate legislation.

But despite the fact that Ocasio-Cortez is now a household name whose likeness can be found riding a unicorn on a coffee mug, she’s still up against a largely old, white, male Congress that’s resistant to the kind of systemic transformation she and millions of young climate activists would love to see.

Girl activists rose to prominence in 2019 and captured the world’s attention. As they grow into women activists — and maybe politicians — over this year and the coming ones, I would love nothing more than to see them capture some of its power.