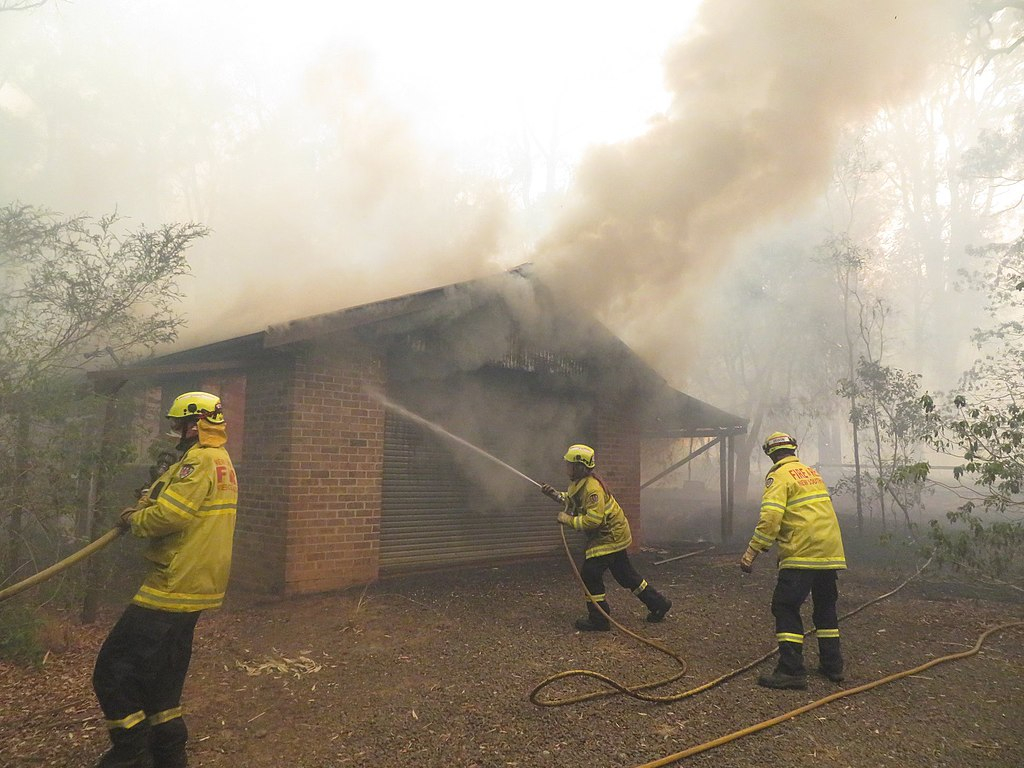 Fire and Rescue NSW firefighters work to save a burning house in McLeay Road hit by a direct impact from the Green Wattle Creek bushfire at Werombi in South West Sydney. Photo: Helitak430 [CC BY-SA/4.0]
Previous story
Next story

The bushfires raging for months across Australia have devastated communities and wildlife, but they pose another major but less visible threat—this one to the global fight against climate change.

While the fires are made worse by climate change, they’re actually part of a disruptive and dangerous cycle: As trees and brush burn, they’re also releasing hundreds of millions of tons of carbon into the atmosphere. Chris Field, director of the Stanford Woods Institute for the Environment, estimates that emissions from these few months of fires in Australia are nearing the country’s manmade carbon emissions for a full year, which are about 540 million tons. “The fires are an indication of the way that nature can make it harder for us to tackle climate change if we don’t act proactively,” he says.

As a result of the fires, smoke has plunged major cities in Australia (and even New Zealand) into darkness, with air quality in Melbourne becoming the worst in the world on Monday. Emissions have reached as far as South America, according to Mark Parrington, the senior scientist for the atmospheric monitoring service at the European Centre for Medium-Range Weather Forecasts—all of which will also have devastating consequences for public health.

Australia needs to cut its emissions by 695 million tons over the next decade to meet its global climate commitment to limit its emissions to 26 to 28 percent below 2005 levels by 2030 (a target it could very well miss).

Prime Minister Scott Morrison has been, let’s say, resistant to acknowledge or confront global warming. While he repeats his “meet and beat” mantra about cutting his country’s emissions, the administration has been pushing dubious climate accounting on the world stage. In reality, since 2014 when the national carbon pricing scheme there was repealed, Australia’s emissions have increased every year. This has been driven in large part by increased natural gas production and a refusal to cut back on coal, one of the worst sources of greenhouse gases. Australia is currently the world’s leading coal exporter, and that likely won’t change as the country is moving forward with the controversial Adani coal mine, which environmentalists describe as a “carbon bomb” and warn will further degrade the Great Barrier Reef.

It seems that @SiemensDE have the power to stop, delay or at least interrupt the building of the huge Adani coal mine in Australia. On Monday they will announce their decision. Please help pushing them to make the only right decision. #StopAdani

The prime minister has received fierce criticism for his handling of the fires; he was slow to accept and react to their severity, deflected on the climate connection, and left on vacation to Hawaii days after declaring a national emergency. “There is no argument about the links between broader issues of global climate change and weather events around the world, but I’m sure people would acknowledge that the direct connection to any single fire event, it’s not a credible suggestion to make that link,” Morrison said recently when pressed. “We must take action on climate change, and we’ll do it without economy wrecking or job destroying reckless targets.”

This isn’t just a problem for Australia.

On a broader scale, the emissions from the Australian fires represent a very small slice of global emissions: just about 1 percent. Some of that is offset by the fact that a lot of the carbon that’s released is then drawn back down when the vegetation regrows, says Stephen Pyne, a professor at Arizona State University who studies fires—and that happens fairly quickly with brush. “That’s different than burning fossil fuel where you’re taking stuff out of the geologic past and you’re basically putting it into the geologic future,” Pyne says. “That’s not recycling. After we burn it, we’re not putting it back in the ground.”

But beyond releasing carbon into the atmosphere, the worsening fires in Australia and elsewhere jeopardize valuable natural carbon sinks by burning up trees and vegetation and degrading soil that would otherwise absorb carbon dioxide from the atmosphere. This all will make it harder to reign in emissions on the global scale moving forward.

“A place like Australia doesn’t have the carbon stock that by [itself] are large enough to be a major concern,” Field says. “But if we see the same kind of feedback loop in forests in Brazil and Indonesia, or wide areas of the subtropic or the boreal forest like Canada’s and Russia’s, then we could really run into serious problems with this vicious cycle.”

Massive fires in recent years—driven in part by drought and heatwaves—have shown that we may be well on our way to such a future. “They just keep coming in succession, not unlike in California. Australia is unique in many ways, but the fact that these fires are going on for so long over every part of the country is a warning that something similar could very easily happen to us,” Pyne says. “When you add up all of our combustion habits, we’re creating the fire equivalent of an ice age.” In a recent issue of Mother Jones, Jeffrey Ball wrote about how the cycle of destruction plays out in California specifically.

Some perspective on the devastating scale of the #AustralianFires:

-5 million hectares of land have burned. That’s 5x the size of the Amazon fires & 50x the California fires#AustraliaBurns #AustraliaFires pic.twitter.com/ALddUzpUPb

This doesn’t bode well for Australians, or for anyone else, unfortunately. “The lesson from these fires is it doesn’t take a lot of warming to dramatically change the risk,” Field says. “It is an unusually hot year in Australia and an unusually dry year, but the amount of warming that was required to transition from an ordinary serious year to a devastating one is not very much.”

Climate activist refuses Siemens' offer of seat on energy board