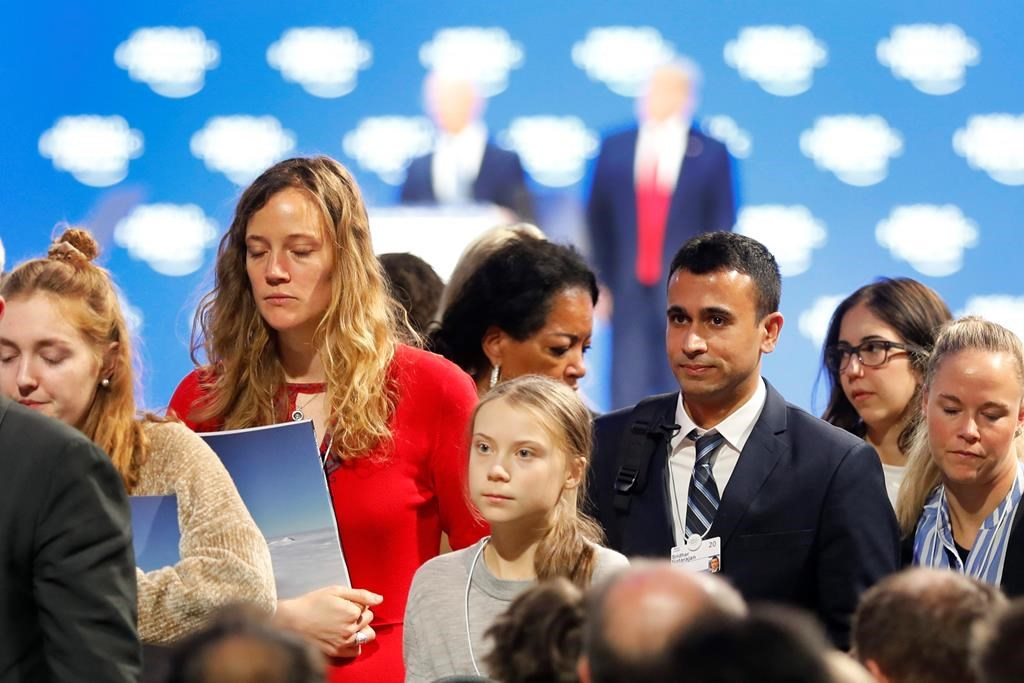 Young climate activists including Swedish teenager Greta Thunberg told business and political elites gathered Tuesday at the World Economic Forum that they aren't doing enough to tackle the climate emergency and warned them that time was running out.

At a panel in the Swiss ski resort of Davos, climate campaigners expressed hope that their generation could work with those in power to bring about the change needed to limit global warming even as Thunberg - a vocal critic of leaders' inaction - said not enough has been done.

“We need to start listening to the science, and treat this crisis with the importance it deserves," said the 17-year-old, just as U.S. President Donald Trump was arriving in Davos, where he later gave a speech. Trump has pulled the U.S. out of the Paris accord to limit climate change and has traded barbs with Thunberg on social media.

“Without treating it as a real crisis we cannot solve it,” Thunberg said , adding that it was time to stop burning fossil fuels immediately, not decades from now.

The Swedish teenager came to fame by staging a regular strike at her school, sparking a global movement that eventually earned her Time Magazine's award as the 2019 Person of the Year. Last year she told leaders gathered in Davos that they should “panic” about climate change.

Speaking in the afternoon, Thunberg brushed aside Trump's announcement that the U.S. would join the economic forum's initiative to plant 1 trillion trees across the globe to help capture carbon dioxide from Earth’s atmosphere.

“Planting trees is good of course but it’s nowhere near enough," Thunberg said. "It cannot replace mitigation," she added, referring to efforts to drastically cut emissions in the near term.

Thunberg accused leaders of "cheating and fiddling around with numbers" with talk of cutting emissions to 'net zero' - that is, emitting no more carbon than is absorbed by the planet or technical means - by 2050.

While there has been widespread criticism both inside and outside the United States over Trump's decision to pull the U.S. out of the 2015 Paris climate accord, Thunberg said the rest of the world, too, was effectively missing the targets set down in that agreement.

She dismissed the notion that climate change is a partisan issue, insisting that "this isn't about right or left."

Responding to those who have accused her of doom-mongering, Thunberg said her message was simply based on scientific facts, not irrational fears.

"My generation will not give up without a fight," she said.

Her views were echoed by other climate activists, such Natasha Wang Mwansa, an 18-year-old activist from Zambia who campaigns for girls’ and women’s rights. She told an audience in Davos that “the older generation has a lot of experience, but we have ideas, we have energy, and we have solutions."

Autumn Peltier, the chief water commissioner for the Anishinabek Nation of indigenous people in Canada, said plaudits are not what they are looking for at the World Economic Forum.

“I don’t want your awards. If you are going to award me, award me with helping to find solutions and helping to make change.”

Thunberg cited a report released in 2018 by the U.N.'s science panel that calculated the amount of additional carbon dioxide the atmosphere can absorb before global average temperature increases exceed 1.5 degrees Celsius (2.7 Fahrenheit). Leaders agreed to try to stay below that threshold when they signed the 2015 Paris climate accord, but scientists warn the chances of doing so are dwindling.

Thunberg noted that the remaining carbon “budget” to confidently meet that target stood at just 420 gigatons of CO2 two years ago, the equivalent of 10 years of global emissions. Even with a more optimistic calculation, keeping the global temperature rise below 1.5 C would require a massive reduction in emissions over the next two decades.

Kirsten Grieshaber and Frank Jordans in Berlin contributed to this report.

Thunberg is a 17 year old

Thunberg is a 17 year old high school drop out. Yes, she achieved fame by taking on the climate change issue, good for her, but to continue to give her a platform? The platform should be for the scientists, economists, leaders of the world to come to a solution of transforming the livelihood of billions of people without taking it away from them in order to save our Earth. It is a challenge! A huge challenge which will require some sacrifice from every one of us.
I would advise Thunberg to go back to school and study all there is about climate change, every aspect of it. I know studying is much harder than standing on a platform, but if she is honest about her goal to save the Earth, she has to work for it like the scientists, the economists and all those whose daily work it is to come up with solutions to do just that.

Good grief Catheline,
Don't you think that's exactly what Greta, Autumn, and the other Youth are saying? If only grown ups would listen to the science and make change, they wouldn't have to do what they are doing.
If you would listen to what they are actually saying (and no one has 'dropped out of school', by the way), they are complaining about themselves not being able to be in school at that moment, and having to speak truth to adults who won't themselves listen to the truth scientists are telling us.
Thank you to all the Youth standing up for your sustainable future! No one has more standing regarding what the future looks like than Youth. We have to stop expanding the burning of our precious fossil fuel resources now! We have the resources and technology to only build using renewable energy ...
Don't you think future generations may need fossil fuels for something too? They are non-renewable, you know.

She is, apparently, ignorant

She is, apparently, ignorant of the complexities as are many hyperactivists and those that follow them and haranguing is unlikely to change minds very fast. She needs to evolve her approach or just go back to school until she understands though to carry a more sophisticated message.

Greta Thunberg is still in

Greta Thunberg is still in school but shoehorns in climate presentations because of the urgency of our climate emergency and the failure of economic and political elites to lower greenhouse gas emissions and concentrations. I suspect it’s not the messenger that’s got you so riled up but the message.

If Greta (and the rest of her generation) was to just shut up and study like you suggest, a climate that’s been so conducive to human civilization will lost well before graduation. Why are you criticizing her when its the privileged ruling class adults of the world who are behaving so outrageously?

She is merely coming across

She is merely coming across as shrill now, but is still a darling due to her age. Time to move in the the next strategy, but perhaps she isn't capable and is enjoying the Rockstar adulation more than thinking about how to get actual workable change.