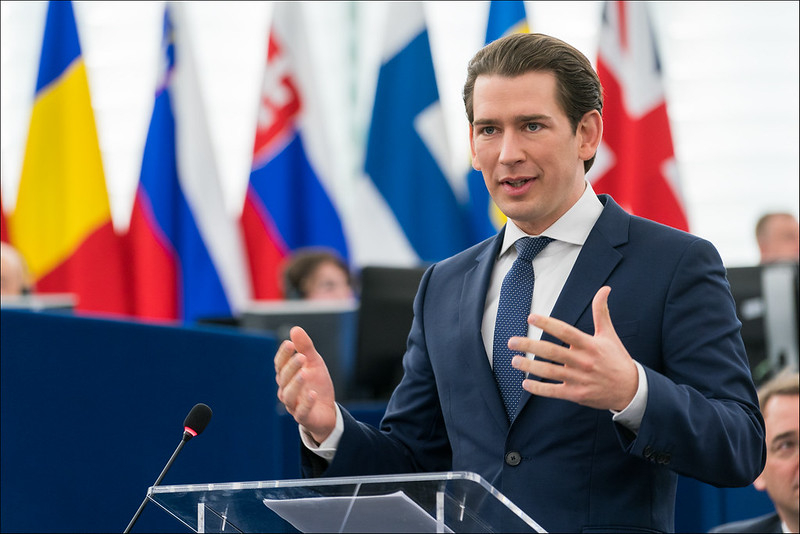 Austria made history earlier this month when it swore in its first female-majority Cabinet. But the formation of the new government marked another, more consequential milestone: It’s the first national coalition made up of the conservative People’s Party and the progressive Greens.

The 300-page contract binding the two parties in a unity government lays out an agenda that includes expanding a ban on Muslim headscarves and opening new deportation centers as well as an ambitious goal to become carbon neutral by 2040.

“We deliberately combined the best of both worlds,” Sebastian Kurz, the conservative chancellor who returned to power last week, told the newspaper Bild. “It is now possible for the Greens to implement central election promises, such as ... the massive fight against climate change. But we, too, can keep our key election promises ... [with] a consistent line in the fight against illegal migration or a clear line in integration.”

The Greens say compromising with the center-right conservatives helped keep the country’s far-right Freedom Party from returning to power. But analysts say the party extracted few concessions from their new conservative bedfellows. And some experts fear the coalition could signal a shift in Europe’s resurgent political right ― away from climate skepticism and toward something that looks increasingly like eco-fascism, the once-fringe ideology scientists consider a “nightmare scenario” in which me-first nationalists exploit the chaos of a hotter world.

“It’s extremely worrying,” said Betsy Hartmann, a researcher who studies the intersection of white nationalism and environmentalism. “There’s a very fine line between political feasibility and pragmatism on the part of the Green party and appeasement of right-wing, anti-immigrant interests.”

Europe’s 13th largest economy began a rightward lurch in the mid-2010s as rising income inequality and waves of migrants fleeing war, poverty and drought in the Middle East and North Africa stoked a new nationalist fervor across the continent. In 2017, the country’s conservative party beat the center-left Social Democrats for only the third time since World War II. Kurz, a conservative firebrand who campaigned on restricting Austria’s small but growing Muslim community, became chancellor and invited the hard-line Freedom Party to form a government.

The 33-year-old Kurz, the world’s youngest national leader, vowed to wage war on “political Islam” and clamped down on immigrants, cutting public benefits to noncitizens and seizing refugees’ cellphones.

But that coalition collapsed last May after the release of a video showing Freedom Party leader Heinz-Christian Strache attempting to trade state contracts for political donations from a woman he believed to be the wealthy niece of a Russian oligarch. The revelation scandalized Austrians and forced Kurz ― who, without a coalition partner, lost his mandate to govern ― to call an election.

Conservatives failed to win an outright majority, leading Kurz to seek a marriage of convenience with the Greens, who had never before served in a national government.

“The Greens could have squeezed more out of Mr. Kurz,” The Economist magazine wrote this week, citing Austrian analyst Thomas Hofer. But “the coalition is less a meeting of minds than a division of fiefs.”

Unlike the Republican Party in the United States, which has long questioned climate science and protected polluting industries from regulation, mainline conservatives in Europe have generally accepted the realities of global warming. Outright climate denialism was mostly limited to the far-right fringe.

But even that fringe has started to shift on climate change. The surprising surge of Green parties in April’s European parliamentary elections prompted a degree of soul-searching among the right-wing populists. The far-right Alternative for Germany’s youth wing in Berlin urged its party leaders to abandon the “difficult-to-understand statement that mankind does not influence the climate.”

Others sought to surf the wave of international concern over the climate crisis. French far-right leader Marine Le Pen found fresh fodder for her brand of Nazi-like blood-and-soil rhetoric, declaring that those “rooted in their home” are “ecological” while “nomadic” people “do not care about the environment because they have no homeland. In Italy, meanwhile, a gang of tree-planting Mussolini admirers linked to murders of African migrants started blitzing Facebook with posts declaring nature cleanups as new “battlefronts.”

Austria’s Kurz “is not right-wing in that traditional, nationalist sense,” said Reinhard Heinisch, a professor of political science at the University of Salzburg. However, he said, his stance on immigration certainly overlaps.

“Kurz is an avid traditionalist, very right on cultural questions, very anti-Islamic and neoliberal economically,” Heinisch said by phone. “But fundamentally he’s interested in power, doing what is popular and maximizing what sells his party.”

On some issues, reflecting public opinion has tempered Kurz. As opposed to much of Europe’s resurgent far-right, which is animated by nationalism, he supports the European Union, as do 40% of Austrians, according to a recent Eurobarometer poll. That’s up from 25% in 2013. The Freedom Party’s leadership lashed out at teenage environmental activist Greta Thunberg for “climate hysteria” as recently as September. Kurz, meanwhile, has long appealed for international cooperation on climate change ― an issue 7 in 10 Austrian called “a very serious problem” in an April 2019 survey.

But on social issues, polling raises some concerns. A shocking 12% of young Austrians said they had never heard of the Holocaust in a 2018 CNN study. A 2017 Pew Research Center poll found that nearly half of Austrians said they would not accept a Muslim into their family, compared with just 15% of Americans. Those sentiments could worsen as temperatures rise, as studyafterstudy suggests that rising temperatures increase aggression and violence on both the geopolitical and individual levels.

Austria is feeling the heat on climate change. Receding snowfall in the Alps is hurting Austria’s snow-sporting industry, and higher temperatures are spreading invasive bark beetles in once lush alpine forests. But heatwaves are proving the most devastating. The hot spell that roasted Europe last June broke monthly records in mountainous Austria, where temperatures soared past 101 degrees Fahrenheit, shy of the all-time national record of 104.9 degrees.

Marc Olefs, head of the climate research department at Vienna’s Central Institution for Meteorology and Geodynamics, called heatwaves “the climate impact with the biggest consequences on health” and the most likely to cause increased mortality rates in Austria.

Globally, the bigger concern is how climate change will affect the billions living in poorer, hotter countries. Catastrophic weather events, which are expected to grow more intense and frequent as average temperatures climb, already have displaced an average of 24 million people per year since 2008, according to the Swiss-based Internal Displacement Monitoring Centre. That sort of mass movement within borders creates political instability that potentially breeds conflict, driving even more to seek asylum in stable, wealthy countries like Austria, which ranks among the World Bank’s richest per capita.

There’s a very fine line between political feasibility and pragmatism on the part of the Green party and appeasement of right-wing, anti-immigrant interests.

In 2018, Austria granted asylum to 20,326 applicants, nearly 6,000 of whom were initially rejected and successfully appealed the decision, according to data from the European Council on Refugees and Exiles. The country turned away 32,221, amounting to a 57% rejection rate.

For comparison, Germany ― a far larger country, whose Christian Democratic Union government is considered an ideological bedfellow of Austria’s conservatives ― rejected just under 50% of its applicants in 2018.

Austrians do seem to be struggling with demographic change and a desire for “only high-qualified migrants,” saidKathrin Stainer-Hämmerle, a political scientist and professor at the University of Applied Sciences in Carinthia. “But Kurz is not a far-right politician. He’s a young, modern conservative leader. He has an ideological flexibility.”

Political malleability in an increasingly chaotic world could bend a leader rightward. As it stands, climate researchers are modeling five Socioeconomic Shared Pathways (SSPs) policymakers could take as temperatures likely blow past the 1.5 degrees Celsius average beyond which the United Nations projects catastrophic changes. The bleakest of those scenarios, called SSP3, envisions “resurgent nationalism” and policies that “shift over time to become increasingly oriented toward national and regional security issues, including barriers to trade,” according to a 2015 paper in the journal Climatic Change. Zeke Hausfather, a climate scientist at the think tank Berkeley Earth, told Earther last week that the world is currently on an “SSP3-ish” trajectory.

That may not yet entirely apply to Austria. But in a country whose Nazi past, including with Third Reich’s reverence for the purity of nature, remains a living memory, Hartmann warned that adding the urgency of dealing with ecological collapse to Kurz’s anti-immigrant agenda represents a “dangerous slipperiness.”

“It’s not Marine Le Pen, exactly,” she said. “But it’s going in that direction.”

CORRECTION: This story has been updated with the correct number of times the conservatives had beaten their center-left rivals since World War II.

Naomi Klein: ‘We are literally and politically flammable’

Immigrants could make up 30 per cent of population by 2036, StatsCan says