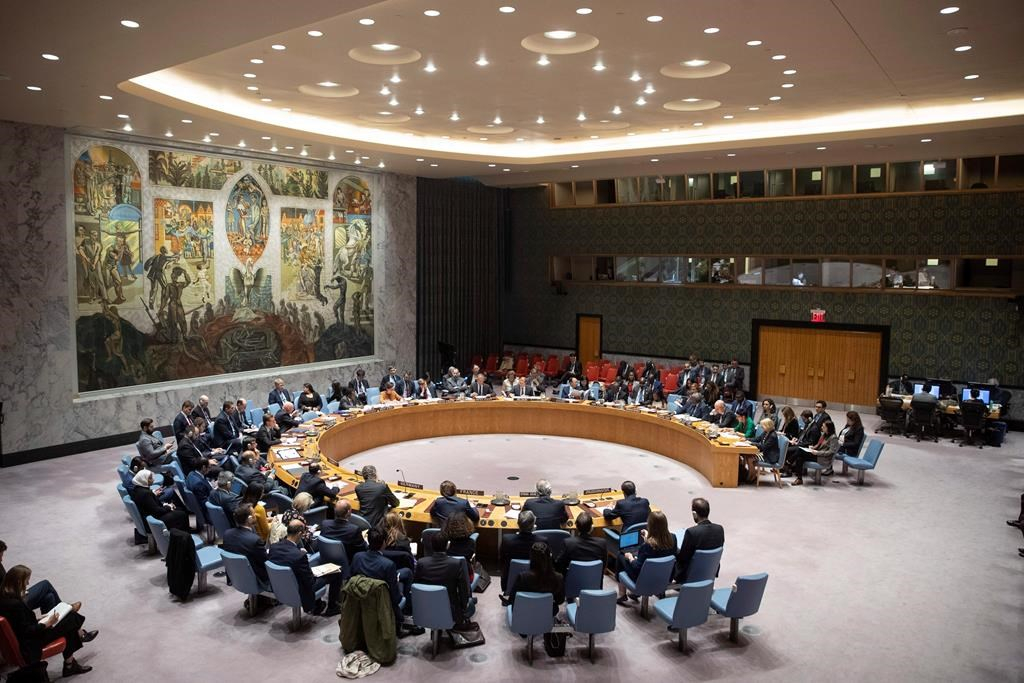 The Security Council meets on the situation in Syria, at the U.N. headquarters, on Thursday, Oct. 24, 2019. File photo by The Associated Press/Mary Altaffer
Previous story
Next story

The ill will of autocratic countries like China, and some worthy head-on competitors, should compel the Trudeau government to campaign harder for a seat on the United Nations Security Council, analysts said Friday.

That advice came as Foreign Affairs Minister Francois-Philippe Champagne said, after a series of meetings in Africa, he is "cautiously optimistic" about Canada's chances of winning a seat on the Security Council this year. Champagne was following Rob Oliphant, his parliamentary secretary, and International Development Minister Karina Gould, who have taken separate trips to Africa this month.

Speaking to reporters Friday after a trip to Mali and Morocco, Champagne brushed off criticism by many analysts who say that Canada's low spending on foreign aid and its contribution of only a few dozen military personnel to UN peacekeeping will hurt it in the upcoming election.

"I was pleasantly surprised by the support I received from the host nations I visited. I think people recognize Canada can play a positive role in the world," Champagne said.

Canada faces stiff competition from Norway and Ireland for the two temporary seats coming open on the most powerful UN body, which will be the subject of a June vote for a two-year term starting next year. Both countries spend more on aid and have contributed more military personnel to peacekeeping missions.

Countries vying for seats need two-thirds support in the secret-ballot process — more than 128 votes — and Africa is one of the most influential blocs, with 54 countries voting.

Canada needs the support of Muslim and Asian countries and two of the major players in those regions, Saudi Arabia and China, have unresolved diplomatic spats with Canada. While both countries are influential in their voting blocs, China has spread its diplomatic footprint into Africa with big spending on infrastructure and by generously doling out its own development spending to win friends and influence policy.

"We are still being outspent by others and have plenty of autocratic countries who don't want to see Canada get a seat and use it to be righteous in human rights, gender, and other values we hold dear," said Bessma Momani, an international-affairs expert at the University of Waterloo.

She pointed to China, Saudi Arabia and Russia as countries that oppose Canada's candidacy.

Prime Minister Justin Trudeau committed Canada to a Security Council run in 2015 as part of his "Canada is back" pledge, following the 2010 loss of a seat to smaller and economically fragile Portugal under the previous Conservative government.

Colin Robertson, vice-president of the Canadian Global Affairs Institute and a former diplomat, said Trudeau himself needs to get out of the country and campaign or brace for a "real setback" in foreign policy.

"Losing in 2020 will be traumatic for Justin Trudeau," said Robertson, a retired diplomat. "And it would be a rude shock to Canadians who think the world likes us."

If Trudeau decides to campaign hard, the election is still winnable, he added: Norway will likely win one of the two seats, but Canada could still edge out Ireland.

Robertson said Trudeau should set a target date for Canada to meet the UN's benchmark for development spending of 0.7 per cent of gross national income. Canada's current level is less than 0.3 per cent.

Fen Hampson, a diplomacy expert at the Normal Paterson School of International Affairs at Carleton University, said Canada's politicking for UN votes will essentially boil down to what it can concretely offer specific regions and countries. And in Africa, that usually leads to a conversation about foreign aid, he added.

"This is a buying-votes game," said Hampson.

"I think we're mounting a very solid campaign. It's going to take more than nice words and friendly homilies about 'Canada is back.'"

Champagne was non-committal Friday about whether he was optimistic about any increase in aid spending in the Liberals' upcoming budget.

"When it comes to the overall budget, there are going to be discussions around that."

This report by The Canadian Press was first published Jan. 24, 2020.

Security Council seat not an end in itself for Canada, says Trudeau

Canada does not deserve a

Canada does not deserve a seat on the UN Security Council.

Throughout the Harper years, Canada came to be seen as a pariah, working against Indigenous rights, rolling back environmental protections, and serving as a US proxy, rather than having an independent voice.

Trudeau hasn't really changed things that much. While making nice sounds on-camera, he works behind the scenes to counter what he says on-camera. He pledges to attack global warming, and then he buys an ageing pipeline, and vows to triple its capacity. He pledges to implement the United Nations Declaration on the Rights of Indigenous People (UNDRIP), and then he cynically lets a back-bencher introduce the bill, knowing it would be bogged down in the Senate. (If the Liberal Government had introduced the bill, the Senate would have been required to act on it within 30 days.)

Canada used to be respected and admired for its non-violence and peace-keeping role. But now, Canada gets involved in whatever war-of-the-moment that the US starts.

The US already has veto power on the Security Council. Canada's presence there would only be for optics, so the US could say, "See? We weren't the ONLY ones opposed to this humanitarian intervention that would have meant our super-rich could not afford a second yacht."

Canada does not deserve a seat on the UN Security Council.

Hear hear! Canada, historically constrained from too independent a foreign policy by its proximity (physical and otherwise) to empire, used at least sometimes to act as a kind of sea-anchor vis some of the worst excesses of Britain and America. Even the Chretien gov't dragged its heels and eventually demurred on the Bush II/Blair criminal invasion of Iraq (though it did quietly provide logistical support, alas). The cheerleader/collaborator/toady role played so often before and so exclusively since has done, no doubt, terrible damage to her standing at the U.N. and throughout the world.
Do Canadian kids when traveling still proudly sport a maple leaf flag on their back-packs, at least in part to differentiate themselves from Americans, the way their grandparents did back in the day when Canada, to the annoyance of crooks like Nixon and Kissinger, offered safe haven to refugees (e.g. American draft resistors, Vietnamese civilians) of imperial "adventures"? Not as likely today, I'd guess. And with good reason. There are neighborhoods in say, Libya or Afghanistan, for example, where that might get you shot (maybe even with a Canadian-made Colt C-15 rifle.)

Who can blame them? It might be news to illiterate Canadians, but Canada seconds United States foreign policy........even under the regime of someone as venal as Donald Trump. We have no problem recognizing a pop up selfie taking nobody as the legitimate head of a state that just months before elected Maduro with a percentage of the vote no Canadian politician can even imagine getting....we're totally in on the regime change games that have devestated eastern Ukraine.....and as far as the middle east goes.........we're silent about the imperial advances of Neton yahoo........act as if the Geneva Conventions are ancient history and do not apply to American allies....and continue sending war machines to the real autocrats of the middle east.....to wit...Saudi Arabia.

Norway is a much better choice. They actually believe in social democracy, government for the people.......and real action on climate change. Canada??? We just talk a good line and walk much like conservatives in power. The world deserves better.