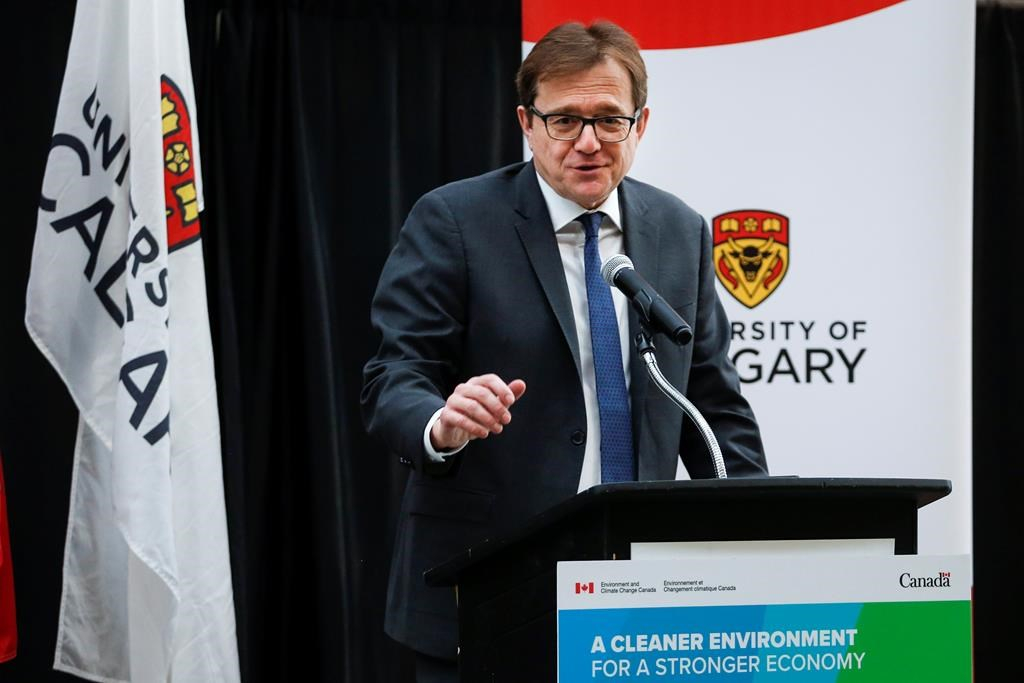 The federal cabinet's decision on a huge new Alberta oilsands mine will weigh what the province is doing to help Canada achieve its climate goal of net-zero emissions by 2050, Environment Minister Jonathan Wilkinson said Tuesday.

Wilkinson stressed that cabinet has not yet decided whether to approve Teck Resources Ltd.'s proposed $20.6-billion Frontier mine near Wood Buffalo National Park in northeastern Alberta.

Provincial efforts to help Canada meet its climate goals will be key, he said.

"It's important that all provinces are working to help Canada to achieve its targets," Wilkinson said in Ottawa. "Provinces need to have targets. They need to have specific actions that they're taking."

"The most recent actions are fighting federal government on the issue of the pricing of pollution," he said. "What we're looking for is concrete action on climate change."

When Ottawa approved the Trans Mountain pipeline expansion in 2016, it made a point of highlighting the previous Alberta NDP government's oilsands emissions cap and carbon tax.

When Jason Kenney's United Conservatives won the Alberta election last spring, they kept the emissions cap but scrapped the consumer carbon tax and went to court over Ottawa's intention to impose its own version. That tax went into effect Jan. 1.

Alberta does, however, still have a carbon levy on large industrial emitters that has the federal government's blessing. It also came into effect this month.

Sites, such as oilsands mines, that produce more than 100,000 tonnes of CO2 must reduce their emissions by 10 per cent below a benchmark based on past performance during the first year, and by one per cent every year after that. If they don't, they must pay $30 a tonne or use credits or offsets.

Alberta Environment Minister Jason Nixon said in a statement that the industrial levy would apply to the Frontier mine.

A federal-provincial review last summer determined that the mine would be in the public interest, even though it would be likely to harm the environment and the land, resources and culture of Indigenous people.

"Teck Frontier has followed the process the Liberal government confirmed for them, so one would hope that Ottawa is not arbitrarily changing the rules at the 11th hour," Nixon said.

"A massive amount of evidence supporting the project is before the cabinet, including the fact that all 14 First Nation groups in the region of the proposed mine have economic agreements of support with Teck."

The Frontier mine north of Fort McMurray, Alta., would produce 260,000 barrels of oil a day and about four million tonnes of greenhouse gas emissions every year for more than 40 years.

Legislation dictates that cabinet must make its decision by the end of February.

"I'm not going to opine on what that decision is going to be."

— With files from Lauren Krugel in Calgary

By Bill Graveland | News, Politics | January 28th 2020
Reports from the Race to a Safer World

By The Canadian Press | News, Politics | January 16th 2020
Reports from the Race to a Safer World

Kenney will gladly pay you

Kenney will gladly pay you Tuesday for a cheeseburger today! Does anyone think he won’t promise the sun, moon and stars regarding Alberta’s contribution to the national climate agenda to get what he wants today? Somebody needs to give their head a shake.

Another oil sands mine is so

Another oil sands mine is so completely wrong that it is difficult to find words to describe the enormity of this wrongness.
It is as enormous an error as it would be to take our children and grandchildren from us and confine them to schools where they would not be allowed to speak English, or to worship in our religion, and to be abused.
Developing another oil sands mine is horrific. It feels as though we are introducing a cancer into our bodies and the bodies of our children and grandchildren.
There is not enough wealth in the world to compensate for this violent desecration of our earth. What harms the land harms us. We are not separate from all of creation.