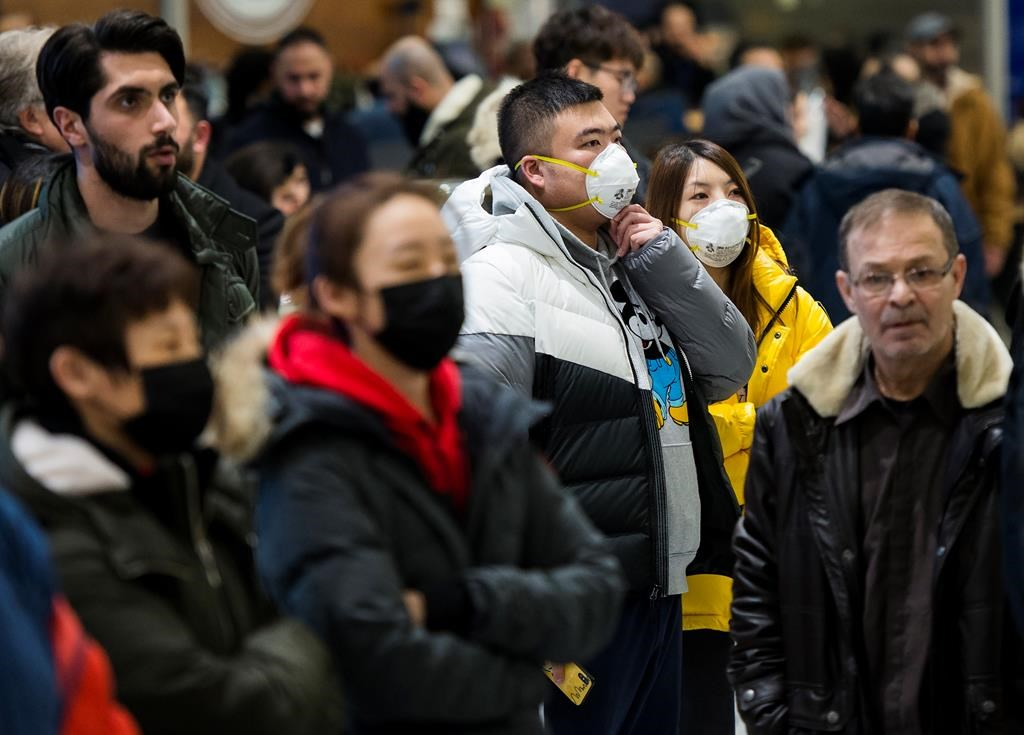 People wear masks as they wait for the arrivals at the International terminal at Toronto Pearson International Airport in Toronto on Saturday, January 25, 2020. File photo by The Canadian Press/Nathan Denette
Previous story

Leaders in Toronto's Chinese community said Wednesday the racist attitudes that led to widespread discrimination against Chinese Canadians during the SARS epidemic are threatening to resurface during the current outbreak of a new coronavirus.

Community organizers held a news conference alongside local politicians, urging Torontonians — and Canadians at large — to learn from the mistakes of 2003, and inform themselves about this coronavirus rather than respond out of fear and implicit bias.

"I certainly hope ... that we do not have a repeat of SARS — not just the virus, but the virus of racism," Go said at the news conference. "And the only way to stop it is for ... our civic leaders to speak out."

Go recalled helping tenants turned out by fearful landlords, workers who saw their hours scaled back by misinformed employers, and even Chinese refugee claimants taken aback when lawyers refused to be in the same room to hear their cases.

Evidence suggests little has changed, community leaders said, citing a petition that calls for schools at a board north of Toronto to urge students who have recently returned from mainland China to "self-quarantine" for at least 17 days. The petition had garnered more than 9,800 signatures as of Wednesday afternoon.

Toronto Mayor John Tory said he has heard of multiple instances of discrimination against Chinese residents as well as calls to boycott Chinese businesses. He decried all such incidents as unacceptable.

"That kind of stigmatization is wrong," Tory said. "It is ill-founded, and in fact could lead to a situation where we are less safe because it spreads misinformation at a time when people are in more need than ever of real information and real facts."

Amy Go, interim president of the Chinese Canadian National Council, said misinformation about the new virus is linked to implicit racism toward the Chinese community.

"In the time of this unknown, this fear, anxiety, it's easy to blame," she said.

Go said listening to Canadian public health officials — who have uniformly said the risk of catching the new coronavirus is low — is among the best ways to counter the misinformation.

Officials suggest frequent hand-washing and covering coughs and sneezes as best practices for preventing the spread of any virus, including this one. They have not recommended quarantine or masks.

Toronto has emerged as the Canadian centre of the new coronavirus outbreak, with both of the country's two confirmed patients living in the city. The people affected are a married couple who recently returned from Wuhan, the Chinese city at the centre of the outbreak.

Officials in British Columbia have identified a third presumptive case of the new coronavirus in that province. In all three Canadian cases, the patients are expected to recover.

The new form of coronavirus has sickened nearly 6,000 people and killed 132 in China and has spread to numerous other countries, and the World Health Organization has declared the outbreak to be a global public health crisis.