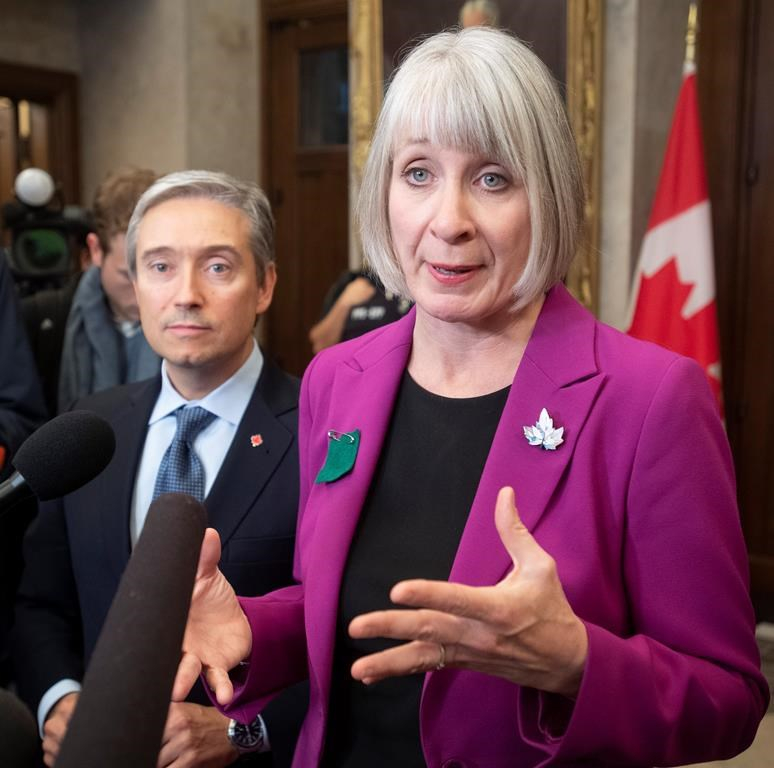 Foreign Affairs Minister Francois-Philippe Champagne looks on as Minister of Health Patty Hajdu responds to a question in the Foyer of the House of Commons in Ottawa, on Tuesday, January 28, 2020. Photo by The Canadian Press/Adrian Wyld
Previous story
Next story

Foreign Affairs Minister Francois-Philippe Champagne said Tuesday Ottawa is "looking at all options" to help Canadians quarantined in China during the outbreak of a new coronavirus.

China began drastic containment efforts to limit the spread of the virus last week, cutting plane, train and bus links to Wuhan, a city of more than 11 million people. Several other nearby cities have been quarantined since, cutting off an estimated 19 million people.

Champagne said 250 Canadians have registered with Global Affairs Canada to say they are in Wuhan and 126 of them have asked for help to get home. He said his officials are trying to contact each one of them to assess their needs.

"Every Canadian that has reached out to us for consular assistance will receive it," he said.

He said Canada will tailor its response based on what it finds after all the Canadians asking for help have been contacted.

Champagne said help could include sending a plane to fly them home, but that Canada is also working with other countries in similar situations. Canada doesn't have a diplomatic office in Wuhan but other countries do and are evacuating their workers. In some cases, others of their citizens are leaving alongside the diplomats.

Champagne said Canada is in contact with the Chinese government about making sure Canada can help its citizens.

Health Minister Patty Hajdu says she doesn't yet know whether any of the Canadians in quarantine in China are sick or would be quarantined in Canada if they do come home.

Not all Canadians in the affected part of China want to leave.

Wayne Duplessis, working in China as a teacher, says he and his family are hunkered down in their home just outside of Wuhan's city centre. He, his wife, Emily Tjandra, and their 15-year-old son Wyatt have spent the last two weeks chatting with people online, watching videos, movies, and the news, and listening to music.

Duplessis said in a Skype interview that he doesn't want to spend hours in the air with people who could be sick.

Dr. Theresa Tam, Canada's chief medical officer, has said symptoms of the new coronavirus are similar to those of the common flu and it can take up to two weeks for an infected person to start showing signs.

Duplessis is originally from Espanola, Ont., and he teaches at Weiming International High School in Dongxihu. He said he thinks it's best to wait it out in Wuhan "no matter how difficult that is."

His advice is to maintain routine.

"Get up in the morning, make your bed, brush your teeth, make breakfast, so some things are the same way every day ... follow that routine so there is a structure to your day."

China has confirmed nearly 6,000 cases of the new virus, with more than 100 deaths — though cases can also be mild and go undiagnosed. Most of the confirmed cases have been in Wuhan.

"Pretty much since they announced the lockdown ... last week it's been ridiculously quiet. Eerily quiet," Duplessis said. "It's been described by various people here like something out of a dystopian movie or something out of 'The Walking Dead.'"

Duplessis said when he last visited the grocery store about a week ago, he saw a few people in masks and gloves and some wearing swim goggles.

The epidemic has revived memories of the SARS outbreak that originated in China in 2003 and killed nearly 800 people. Chinese authorities were criticized for reacting slowly and failing to disclose information.

Duplessis, who has lived in Asia since 1996 and was in China during SARS, said the cities weren't locked down then and it didn't seem as immediate.

"We moved around relatively freely. We still gathered together," he said. "There wasn't isolation as there is now."

But credit cards, electronic money and the internet have helped people "effectively still be in contact with everyone," he said.

"That has reduced the isolation or at least the feeling of isolation if not the cabin fever."

This report by The Canadian Press was first published Jan. 28, 2020.