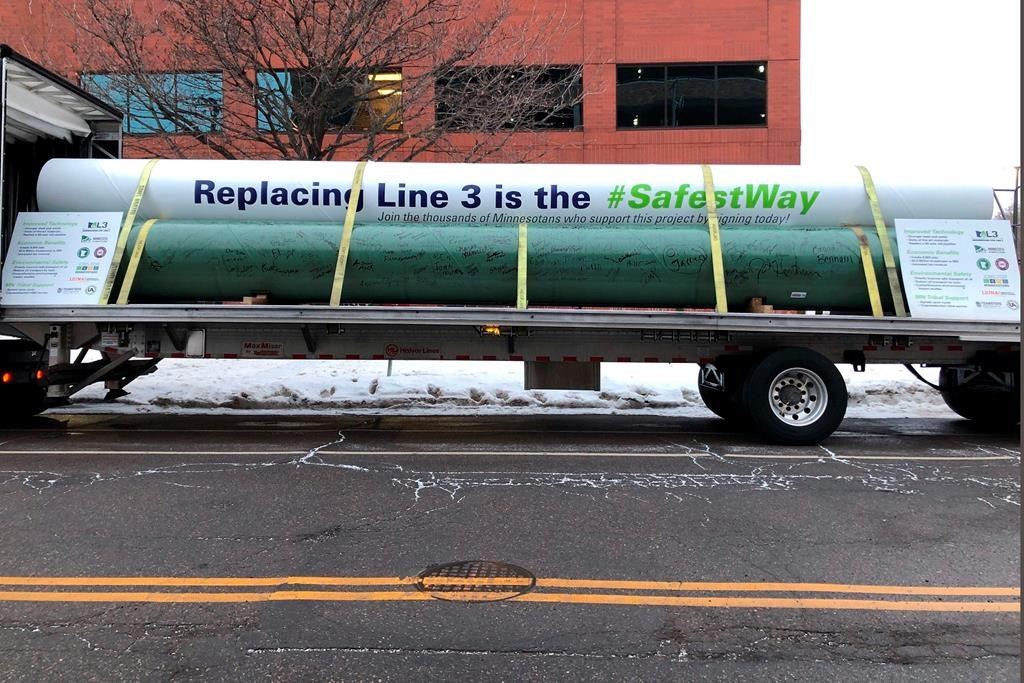 Minnesota regulators opened a hearing Friday on an updated environmental review for Enbridge Energy's plan to replace its aging Line 3 crude oil pipeline across the state, but most testimony focused on broader questions of whether the project even be built.

Environmental and tribal activists urged the Public Utilities Commission to reconsider its earlier approvals and kill the project, saying climate change has reached a crisis stage. But the project's supporters, including union construction workers, testified it's time to let Enbridge complete the $2.6 billion project.

Dr. Laalitha Surapaneni, a physician at the University of Minnesota, was first in line for the hearing. She said in an interview that she had waited outside in the cold since 3:30 a.m. with no guarantee that she'd get to talk because she considers climate change to be a health emergency. When she got drawn at random to testify, she asserted that the updated review is “inadequate” because it doesn't properly address human health risks from a spill or the threat of climate change to human health.

Line 3, which was built in the 1960s, starts in Alberta and clips a corner of North Dakota before crossing northern Minnesota en route to Enbridge's terminal in Superior, Wisconsin. Enbridge says the old line needs replacing because it's increasingly prone to corrosion and cracking and can run at only about half its original capacity.

The Minnesota Court of Appeals sent the previous final version of the project's environmental review back to the commission after finding that the massive document failed to adequately deal with the potential risks of an oil spill in the Lake Superior watershed. The state Department of Commerce then conducted additional modeling and concluded in the update that there was little chance of a spill reaching the lake.

So the central questions on the commission's agenda were whether the update is adequate to pass muster with the courts, and if so, whether to reissue the certificate of need and route permit that Calgary, Alberta-based Enbridge needs to proceed with building the Minnesota segment. The new Canadian and Wisconsin segments are already operating.

Enbridge said in a filing ahead of the hearing that the update meets the court's concerns and that the record continues to show that the project is needed.

Friday's session — the 68th public hearing on the project by Enbridge's count — was meant for comments from the general public, including several lawmakers.

Democratic Rep. Frank Hornstein, of Minneapolis, was one of the relatively few testifiers to address the adequacy of the updated environmental review. He said there are still significant shortcomings with how it addresses the need for a rapid spill response.

But Democratic Sen. David Tomassoni, of Chisholm, who has applied to fill an open seat on the PUC, urged commissioners to approve the update and reaffirm the certificate of need and route permit.

“The old pipeline needs replacing," Tomassoni said. "Replacing old infrastructure protects our water and natural resources. The construction alone will provide hundreds of good paying jobs with the latest and most modern technology. It just makes good sense to do so.”

The commission will hear Monday, and Tuesday if more time is needed, from official parties to the case, which include Enbridge, its allies, and environmental and tribal groups opposed to the project. Their testimony is expected to focus more closely on the updated environmental review. If the commissioners sign off, Enbridge will still need to secure some state and federal permits.

It would be interesting to know why this old line “needs replacing because it's increasingly prone to corrosion and cracking”, whereas the existing Trans Mountain line which was built earlier apparently does not need replacing.