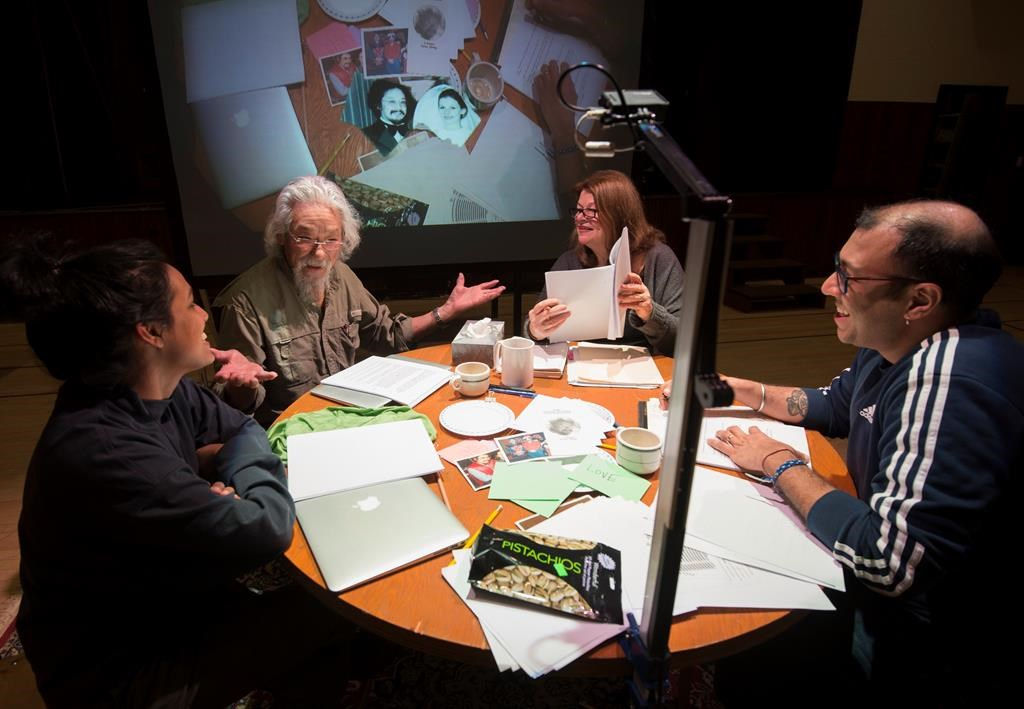 David Suzuki and his wife Tara Cullis go through a rehearsal for their play What You Wouldn't Do For Love with Ravi Jain and Miriam Fernandes in Vancouver B.C, on Thursday, January, 30, 2020. File photo by The Canadian Press/Jonathan Hayward
Previous story
Next story

One of Canada's best-known environmentalists and broadcasters is making his theatrical debut in a performance that explores whether people can learn to love the planet the way they love each other.

David Suzuki will take to the stage alongside his wife and fellow activist Tara Cullis in "What You Won't Do For Love," created in collaboration with the Toronto-based Why Not Theatre.

Set at the dinner table, the scripted conversation will feature stories from the couple's life spanning four decades at the forefront of the environmental movement, explained the theatre's artistic director, Ravi Jain.

Decisions about how to mitigate climate change often hinge on economic fears, rather than the interconnectedness of humans with nature, Suzuki said in an interview.

But to deal with the environmental crisis seriously, he said, "We have to love the world that gave birth to us and that keeps us alive and healthy."

"What You Won't Do For Love" focuses on family bonds, the excitement and frustrations of activism and the motivating force of love itself, with a hearty dash of humour and the goal of energizing the audience, said Jain.

They're offering audiences a sneak peek into the show as it takes shape during a workshop akin to an open rehearsal Tuesday evening during the Push International Performing Arts Festival at the Anvil Centre in New Westminster, B.C.

It was Jain who approached Suzuki, 83, and Cullis, 70, with the idea to create a performance with love as the central theme, and the couple were intrigued.

It's a critical year for climate action and the future of the planet, said Suzuki. So, he decided to try his hand at something new to engage people and have fun, too.

"We're pulling out all stops in the sense that we'll even try to be actors," he said, laughing.

A geneticist by training, Suzuki has spent much of his life communicating science to audiences across Canada and the world as the host of CBC's documentary television show "The Nature of Things," among many other broadcasting roles.

But science can be limited, too, said Suzuki, noting that love is an important salve and motivating force in the face of climate change, environmental degradation and the feelings of grief that can ensue.

Indeed, the American Psychological Association has released a report on how climate change is affecting mental health, while a study from the University of Alberta showed that the wildfires that burned through Fort McMurray, Alta., in 2016 took a lasting psychological toll on many residents.

Jain is a firm believer in the power of theatre, poetry and storytelling to spark change. Previously, he helped direct "Sea Sick," a play about the state of the world's oceans by Canadian science journalist Alanna Mitchell.

"Since time immemorial … we painted the world we saw on caves in hopes we could try to understand the world and our relationship to it. The stories we tell will help shape how we see," said Jain, who will join Cullis and Suzuki on stage in addition to directing the show.

Using art to provoke emotion can be a powerful way to encourage people to take action, said Dr. Jiaying Zhao, a psychology professor at the University of British Columbia and the Canada Research Chair in Behavioural Sustainability.

Focusing on intimate, evocative stories can help avert the so-called psychic numbing that tends to follow large-scale events or statistics, said Zhao, such as estimates that a billion animals have died so far in the bush fires tearing through Australia.

"That's an astronomical number that most people don't know how to understand," she said.

If the scale of a disaster is too large, it's impersonal, and people tend to feel like their actions won't make a difference. In fact, said Zhao, responses get weaker as the scale of an event increases.

Instead, behavioural responses are strongest with one victim or one powerful story, she said.

Ultimately, though, changing people's minds and spurring them to act is hard, said Zhao, so the most effective way to promote behavioural change is to make it easier and more socially desirable. That necessitates structural changes, not just individual ones, she said, including better public transportation and household energy options.

Theatre is outside Cullis's comfort zone, but in keeping with the name of the theatre company she said, "Why not?"

"We have to act as if our lives and our children's lives and futures are at stake since they actually are," said Cullis, who wrote her doctoral thesis on the rupture between science and literature in the 20th century.

It's the first time the Push festival has presented such a work-in-progress, said Jain, and he's hopeful the final piece will premier at the same festival next year.