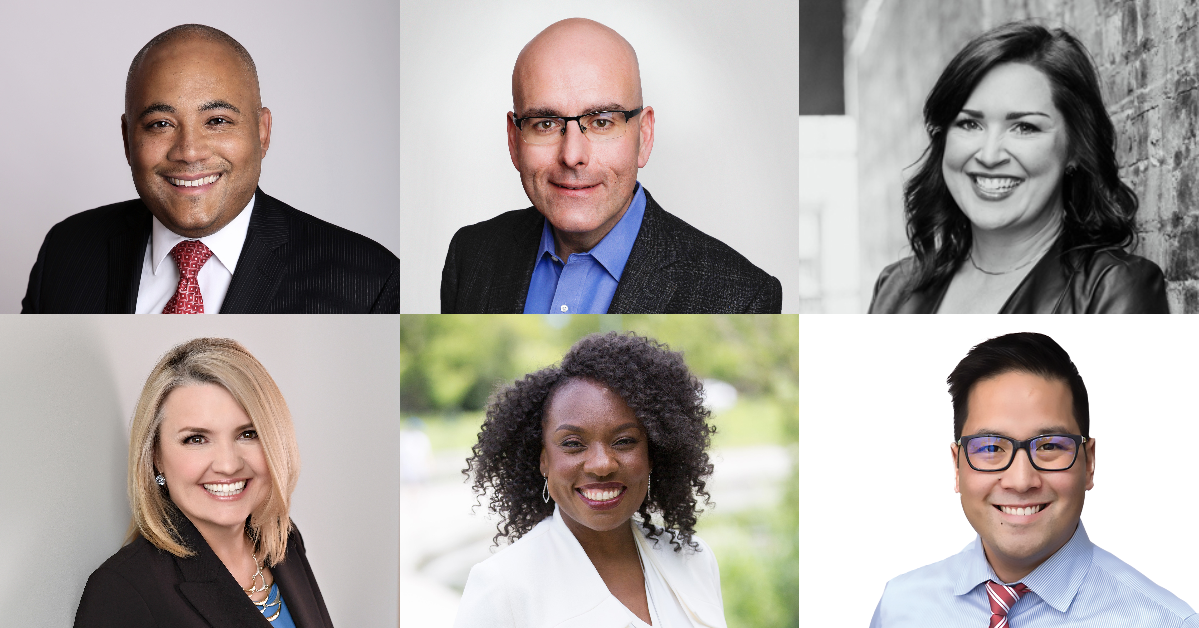 Canada’s federal Conservatives are searching for a new leader. But they are not the country’s only political party facing a daunting renewal process following stark electoral defeat.

Six candidates are hoping to lead Ontario’s Liberals out of the wilderness following a 2018 rout. The winner, who will be selected by party members next month, could be the leader of Canada’s most populous province in two years time, given the slumping popularity of Doug Ford’s Progressive Conservative government.

Ford moved quickly to rip up the climate plans of Kathleen Wynne’s former Liberal government. Those cuts, along with a whole host of others, are weighing on his ratings. Voters expect the Liberal leader to have a “better than Doug Ford” climate plan. But we wanted to find out from each leadership hopeful just how strong their plans are and how much they will help Canada reach its Paris Agreement targets.

So we went to all six candidates to find out about their climate goals.

Don Valley East MPP Michael Coteau wants all public transit to be fare-free within a decade.

A university lecturer and public servant in London, Ont., Kate Graham wants to triple provincial transit funding and cut taxes on companies in the green economy.

Six candidates seek the leadership of Ontario's Liberals, whose climate policies were dismantled by Doug Ford's Progressive Conservatives soon after they took power in mid-2018. @5thEstate asks them where green policy should go from here.

Alvin Tedjo wants to merge Ontario’s Catholic and non-Catholic school boards and is pushing for a basic income. He plans to electrify the GO transit network and reduce fares.

We asked the candidates key questions about their position on climate and the environment. Here are some of those questions and their answers.

Political pundits say the Liberal climate platform (and the lack of a compelling Conservative alternative) helped Justin Trudeau’s federal party win October’s election. That platform included federal carbon pricing imposed on any province that didn’t have an adequate carbon reduction program of its own. The federal plan returns that revenue to taxpayers via their returns.

Ontario got hit with federal carbon pricing after Ford dismantled the Ontario cap-and-trade system. Ford is fighting that federal carbon tax in court.

None of the Liberal candidates oppose carbon pricing, but National Observer wanted to know whether they would stick with Ottawa’s version or bring in a new provincial pricing plan.

Coteau says he would stick with federal carbon pricing as it is “now firmly in place following the 2019 election” and that “Ontario has the opportunity to focus our efforts on additional measures to enable people to transition to carbon neutrality.”

To determine what those measures would look like would require “robust and widespread consultations with experts in science, technology and carbon finance,” he said.

Del Duca didn’t say whether he would stick with the federal scheme. He said he would review emissions data available in 2022 before deciding. “The last thing I want to do is keep changing the plan, which will only further delay our collective ability to successfully fight climate change,” he said. He also is promising to form an all-party committee on climate change.

“I want every party at the table so that everyone feels a sense of ownership,” he said. “Maybe the PCs won’t show up or won’t support anything - I still want to try to engage them. We don’t want to see the Ontario government rip up every environmental regulation every time there’s a change of government.”

Graham said that her government would repatriate the existing carbon price. That means replicating the federal framework but with the province collecting the revenue. It would be returned to consumers directly until the establishment of a provincial tax commission.

“Any future changes to the carbon price would be determined through our tax and transfer commission, where the system as a whole would be analyzed to ensure it's meeting our environmental, affordability and economic goals,” she said.

But she also told National Observer that she has heard strong support from voters for a made-in-Ontario solution “that would allow the province to invest in green projects.” That could mean either introducing an updated version of cap-and-trade or keeping the climate pricing model but ensure it funds Ontario’s climate projects, she said. 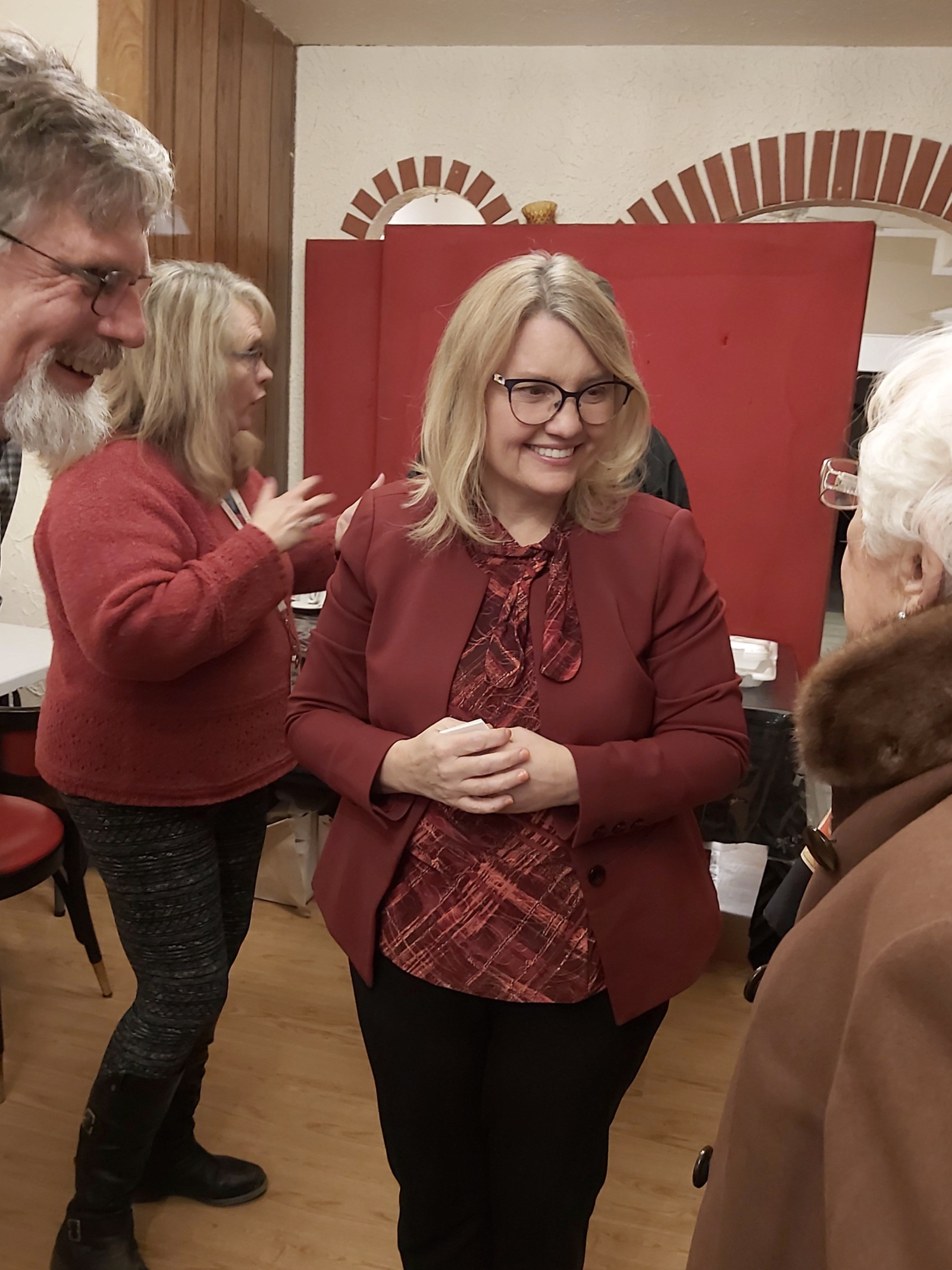 Hunter wants Ontario to replicate Ottawa’s carbon price, with the province collecting the tax and handing the revenue raised back to consumers.

She says her carbon price would be “a transparent carbon levy equal to the federal price on pollution,” calling it the lowest cost option for meeting emissions targets. She said trade-exposed industries — heavy emitters who could flee the province if the cost were too high — would be covered by a so-called output-based system to encourage them to cut emissions while minimizing costs.

She said no more than 10 percent of the carbon price revenue will be used to finance sustainable programs in schools, post-secondary institutions, social housing, and for research and innovation of sustainable technologies.

Tedjo sees a choice between either going back to cap-and-trade or establishing a made-in-Ontario carbon tax.

“Ontario must stop handing over provincial revenues to the federal government if we want to make sure that Ontarians' money is spent on our priorities,” he said.

“Whichever we decide, it’s important that we avoid causing hardships for rural and northern families trying to make ends meet but ensuring that the wealthy household running a heated pool all year-round is paying a fair price,” he added.

If elected, Tedjo said he “would make that critical decision after consultation with Ontarians.” 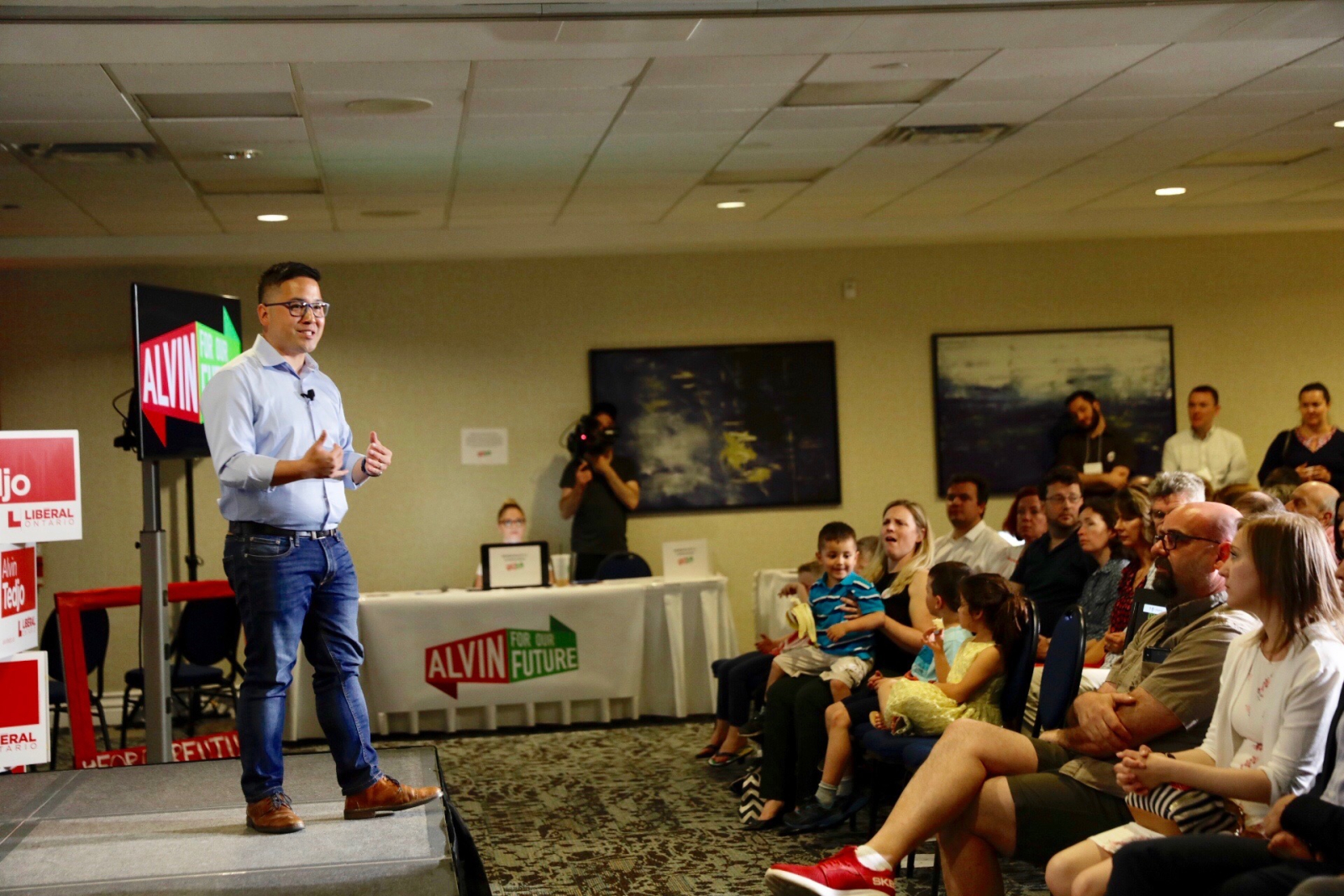 Alvin Tedjo speaks to an audience about his candidacy in an undated photograph supplied by his campaign.

The federal carbon price is part of a broader scheme to cut Canada’s greenhouse gas (GHG) emissions by 30 percent below 2005 levels by 2030. Ontario has also adopted that 30 percent target.

Ontario had managed to cut its emissions by some 22 percent from 2005 levels under previous Liberal governments, mostly thanks to the phase-out of coal-fired power plants. But Ford’s regressive climate actions since July 2018 have pushed that goal further out of reach.

The provincial New Democrats, meanwhile, are proposing to cut emissions by at least 50 percent below 2005 levels by 2030 and to achieve net-zero emissions by 2050. The federal Liberals have also pledged to reach net-zero by 2050.

Net-zero, also known as carbon neutrality, is when GHG emissions have either fallen to zero or are otherwise removed or offset. This can be done via emerging technology such as carbon capture and storage, or by planting a significant number of trees.

So the National Observer asked each Liberal leader hopeful how ambitious their carbon reduction plan would be.

Graham committed to a fully carbon-neutral Ontario by 2050, with interim goals to be set.

Tedjo says Ontario needs to be carbon neutral by 2050 at the latest, and that such a goal requires meeting ambitious targets. Those targets should be set by a new Environmental Accountability Officer, he said, who would “provide the government and the public with ongoing updates as to what our targets need to be, based on the most up to date science available.”

Hunter commited to meeting the target of a 30 percent reduction in greenhouse gas emissions below 2005 levels by 2030. She said she planned to reduce emissions by 80 per cent by 2050. That is less ambitious than the carbon-neutral pledges of both Graham and Tedjo.

Hollingsworth said she “would want to be as ambitious as possible in the context of where we will be starting halfway through 2022” given the Ford government does not appear to be making significant progress towards existing goals. She said interim targets measured at 3-year intervals would be set.

Coteau said he would “work collaboratively with the federal government to revisit our targets in 2022 and coordinate supports for job-creating, low-carbon solutions.”

Del Duca also brought Ottawa into the question, saying “the best thing we can do is work alongside the federal government to help it meet our national goals.”

He said existing targets should stay in place and did not say whether he would target net-zero by 2050. “We need to analyze the situation to see if we can be more aggressive in combating climate change,” he said. “We should have a provincial target that is ambitious."

Part Two of the series looks at the candidates views of transit, transportation and the automotive industry, while Part Three considers the electricity system.

Next leader of Ontario's Liberal Party will have 'back-breaking' work

Planting a huge number of

Planting a huge number of trees has a number of advantages: 1) within about 5 years, each tree starts to accumulate carbon drawn from the atmosphere 2) a large number of students get summer employment by planting trees, although there are also more efficient methods of large scale planting 3) these trees can be harvested in 30 years or so, generating economic benefits. However, unless the wood from the trees is preserved, such as in the form of lumber incorporated into buildings (low cost housing would be an interesting indirect benefit), the carbon will return into the atmosphere. So, the ownership of the new forests is of relevance: whoever paid for planting and for the land where the planting is done should now own the forest and its increased value (i.e. government owned, for the purpose of producing lumber destined for low-cost housing). Nevertheless, planting new forests (i.e. removing CO2 from the atmosphere) is only a partial solution to the CO2 crisis. The other part of the solution is to decrease emissions by all sorts of other means generally grouped under the principle of increased efficiency (in heating, transportation, manufacturing, resource extraction, agriculture etc). Both methods should be used simultaneously.

What is needed to get us to a

What is needed to get us to a sustainable future is bold leadership, not timid incrementalism. Our national climate plan is broadly acknowledged to be insufficient to meet our Paris targets. Unfortunately this kind of inadequacy will still look progressive compared to Doug Ford. Enough so, I'm sure, that Ontarians will vote for one of them just to get rid of the Conservatives.