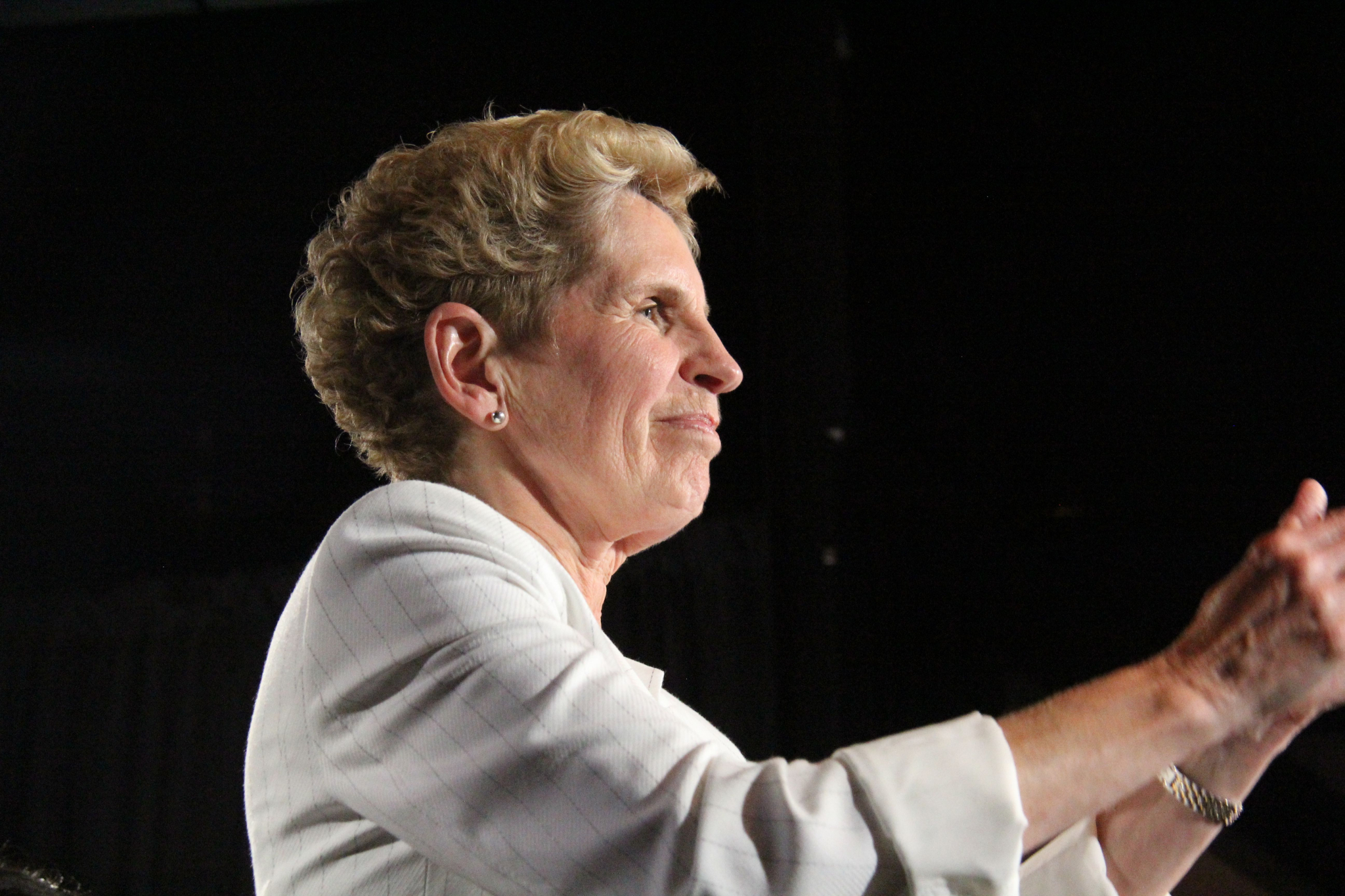 There was little drama at outgoing Premier Kathleen Wynne’s headquarters in North York as a scattering of supporters saw the early results of the Ontario election roll in. The sparse crowd was subdued from the start of the evening, and there was no change when, 16 minutes after the polls closed, two giant screens confirmed that Doug Ford would soon be leading a new majority government.

Moments later, Wynne was on stage, fighting back tears as she announced she was stepping down as leader of a party that appeared to be on the verge of losing official status in the Ontario legislature.

With a catch in her voice, she said she had asked the party president to start the process of finding an interim leader.

"There is another generation, and I am passing the torch to the next generation," she said, delivering her official concession.

Leading the Liberals to defeat after the party's 15 years at the helm of the powerful province, Wynne tried to remain upbeat, inspring some cheers as she reviewed the legacy of her premiership with pride.

Most Ontarians watching results on major television networks were unable to watch her speech live since Premier-elect Doug Ford started delivering his victory speech before his opponents, Wynne and NDP Leader Andrea Horwath, had a chance to concede.

Wynne won her own seat in Don Valley West but whether her party would have eight seats required for official party status was not clear late in the evening as late polls were still being counted.

The Liberals ended the evening with about 20 per cent of the popular vote, about half of what Ford's Tories got, and more than 10 percentage points behind the New Democrats. The results leave the once-mighty Liberals as the third party in the Ontario legislature.

“We obviously went into the campaign hoping that we’d be re-elected,” Ontario Liberal Campaign co-chair Deb Matthews told National Observer. “We have an outstanding slate of candidates across the province; we have a really good platform that were very proud of and that reflects our liberal values; and we have a premier who is head and shoulders above all the other leaders."

"It’s been a tough campaign.” Kathleen Wynne resigns after leading the Liberals to defeat in the #Ontario elections. @natobserver reports

"Turns out that the appetite for change was far greater than the appetite to re-elect us," Matthews added. "It’s been a tough campaign.”

Minutes before the first results came in, a supporter of Kathleen Wynne anticipated what was to come.

“I was just saying as we were driving up, I don’t know what’s making me more depressed,” said Don Valley West resident and baseball fan Marla Waltman. “The Blue Jays doing terribly and this election campaign, which has been a horrible campaign for all three parties I think. I’m just miserable, I’m a mess,” she said with a chuckle.

Waltman, who told National Observer that she was a civil servant for 53 years and is currently doing volunteer work in her retirement, says she felt as if she had to support Wynne’s campaign. She spent the entire day going door to door and engaging with voters.

“I haven’t been well but knew I had to work today to pull the vote because if I didn’t, I knew I wouldn’t be able to forgive myself if she wasn’t elected in the riding.”

Volunteers worked until the last minute

The first major outbursts from the crowd came when Wynne was projected to keep her seat as MPP of Don Valley West. She had been running neck-and-neck with her Progressive Conservative Party opponent Jon Kieran.

Thirty minutes before the polls closed, the Liberal campaign election venue was populated by a handful of campaign officials and the press. Volunteers were expected to be out on the ground until the very last moments, with the polls closing at 9 o’clock.

Matthews, the Ontario Liberal Campaign co-chair, was MPP for London North Centre since 2003 and did not seek re-election. She called Wynne’s decision to concede early “selfless” and dramatically changed the reaction canvassers received. After the announcement, said Matthews, voters felt like they could vote for the candidate in their riding without “without having to think about voting for Kathleen Wynne.”

“It’s a phenomenon I’m not going to pretend I understand,” said Matthews. “But what I can tell you is (volunteers) on the ground and candidates found it extremely helpful.”

Matthews said tonight’s goal is to secure as many Liberal seats as possible and figure out where to go next.

“As we wrap our heads around not winning this election we are very much focused on what we were able to accomplish,” she said,

Wynne, who has led the Liberal Party since 2013, conceded she was going to lose a few days before the election. Still campaigning, she urged voters to elect enough Liberals to ensure the new government would have a minority.

Last month, Wynne stated it was too early to agree to forming a coalition with her New Democrat opponent should Ford win a minority. "I'm not going to pre-empt the result of the election,” Wynne said at a May 13 campaign event, later asking for Ontario’s continued support to avoid handing any party a “blank cheque.”

After Ford was sued by his late brother’s widow for $16.5 million for mismanaging their family estate three days before the election, Wynne called into question his business acumen – which he has prolifically campaigned on as a leadership qualification – calling on him to be transparent about his business.

Ford denies the allegations against him, which have not been proven in court.

On Monday, David Henderson – Liberal MPP candidate for Leeds-Grenville-Thousand Islands and Rideau Lakes – announced that he will seek party leadership if elected.