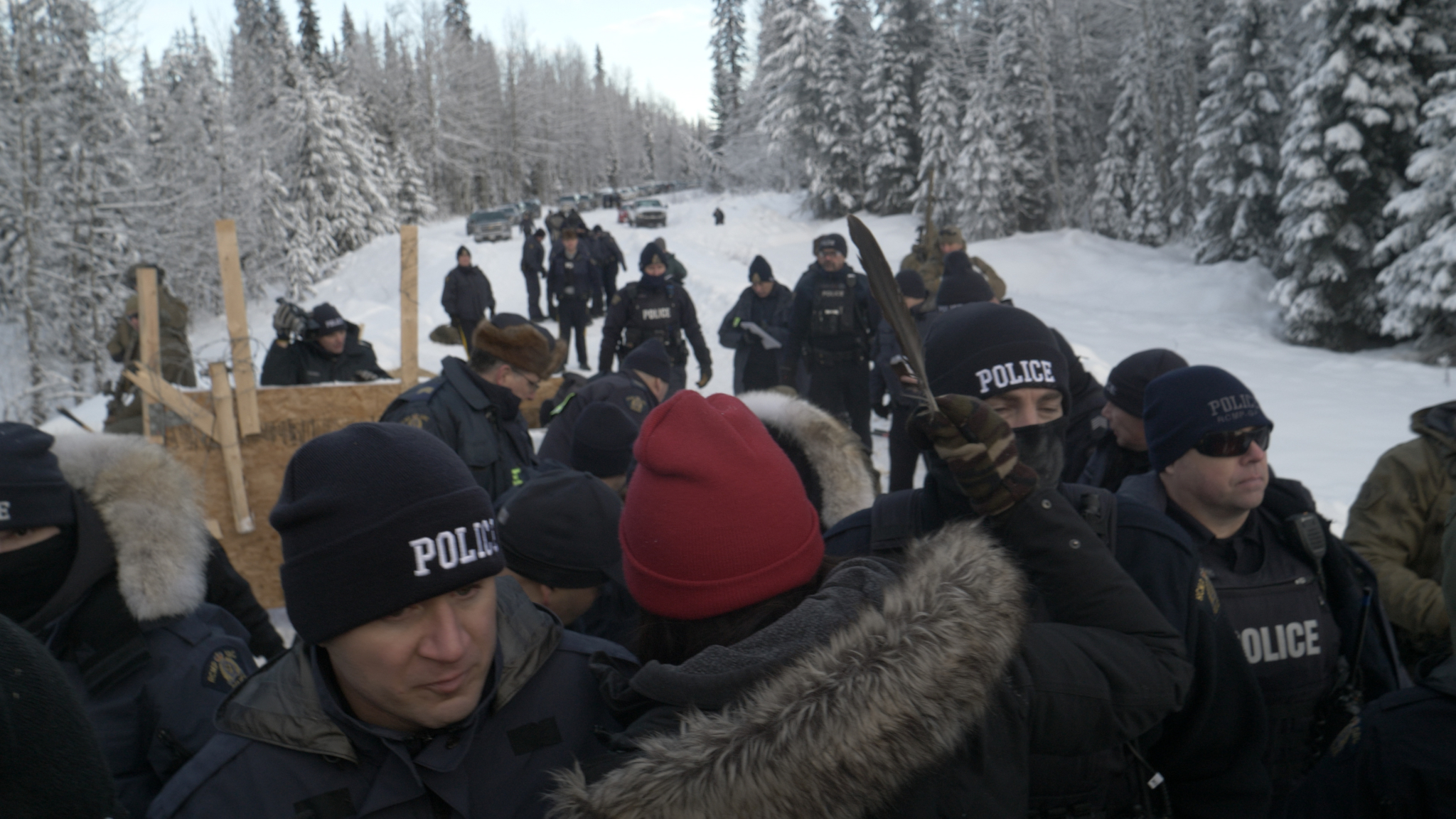 Militarized police moving in on the Gidimt'en Checkpoint on Wet'suwet'en territory in northern B.C., on Jan. 7, 2019. Photo by Michael Toledano
Previous story
Next story

The first officers ⁠— many armed with tactical gear ⁠— began making arrests before 5 a.m. local time, removing journalists from the site and cutting off Wet’suwet’en radio communications, people in the camps said in reports posted to social media. Hours later, the Wet'suwet'en filed an application in court to have a judge strike down B.C.'s environmental approval of the pipeline, while demonstrations supporting the First Nation blocked highways and rail lines.

“This is an invasion of Indigenous territory,” said Cody Merriman, a member of the Wet’suwet’en community, in a live Facebook video showing a convoy of RCMP trucks streaming past a We’suwet’en checkpoint. At least 13 police vehicles were used in the pre-dawn raids.

Members of the remote First Nation and their supporters have built four camps along the Morice West Forest Service Road on their unceded territory some 1,200 kilometres from Vancouver, as they reoccupy their land and oppose the Coastal GasLink pipeline. The project is slated to run through Wet’suwet’en territory even though the nation’s hereditary chiefs have not consented.

Thursday morning’s raid threatens to be a repeat of last year, when heavily-armed RCMP officers stormed a Wet’suwet’en checkpoint along the road and violently arrested 14 people. Officers were enforcing a court injunction to clear the Wet’suwet’en out of the way of pipeline construction.

At the time, officers were prepared to use deadly force against the Wet’suwet’en and had snipers in place, the Guardian reported in December.

Officers storming the camps Thursday morning were enforcing a second injunction, which a B.C. Supreme Court judge granted to Coastal GasLink on Dec. 31. The RCMP had warned enforcement of the injunction was imminent during a news conference on Wednesday.

As of 8:30 p.m. Pacific time Thursday, there were no reports of RCMP entering Unist’ot’en Camp or the Gidimt’en Checkpoint, a camp at the 44-kilometre mark. But as night fell, tensions remained high, with Unit'ot'en Camp reporting that RCMP heavy machinery was nearby, and tactical officers spotted moving through the trees lining the sides of the road.

"Police, stay calm," said an officer shown in a video posted to Twitter, striding past a gate as more officers poured in behind him. "You have ten minutes to depart."

"You are invaders," one woman shouted back. "You are not welcome here."

RCMP violently invaded unceded #Wetsuweten territory at 4:30am this morning. NO ONE was blocking the road, NO ONE was violating any injunction. Dozens of cops with dogs and assault rifles were used to arrest 6 unarmed people. #Westuwetenstrong

Six people were arrested and brought to the nearby town of Smithers. One of them was communicating with Unist’ot’en Camp by radio; officers smashed the windows of that person’s truck and dragged them out, cutting off communications, the statement said.
Police used dogs and had their guns out, though the weapons weren’t aimed at people, Unist’ot’en Camp said.

RCMP confirmed in a press release that they had arrested a woman who had removed her clothing inside a truck by smashing the vehicle's windows. A man who fled into a tree was also arrested.

Though RCMP said the six would likely be released with an upcoming court date, Unist'ot'en Camp said they were freed without being charged.

The RCMP also temporarily detained reporters at the 39-kilometre camp.

Jesse Winter, a reporter on assignment for Vice, said on Twitter that police left him and a second journalist in a parking lot after initially promising to bring him to his rental car. They barred him from taking photos of tactical officers and threatened to arrest him if he didn’t comply, he said.

Later, RCMP confirmed to the online media outlet Ricochet that officers would arrest any journalists who refused the area -- including a Richochet reporter, Winter and several others.

" We remind (B.C.RCMP) that Canada is not a police state," said the Canadian Association of Journalists, which represents and advocates for news media in Canada.

"Police do not have the right to control what is published."

In a statement, the RCMP said reporters had merely been "transferred out for safety reasons."

The CAJ has verified numerous reports that the #RCMP have threatened to arrest #cdnmedia journalists at #Wetsuweten Territory for taking photos. We remind @BCRCMPMedia that Canada is not a police state. Police do not have the right to control what is published. pic.twitter.com/V2hVK2PLhA

In a press release early Thursday, the RCMP said the area is now a “full exclusion zone.” Officers are blocking access to the area, “with some exceptions for Wet’suwet’en Hereditary Chiefs and Elected Council members.”

“The exclusion zone's purpose is to temporarily create an area where police and Coastal GasLink work can safely operate to deploy heavy machinery and equipment needed to clear hazards and re-establish access as intended by the Court,” the statement said.

Unist’ot’en Camp said witnesses counted 36 RCMP vehicles going up the forest road, along with one ambulance, several bulldozers and an excavator.

No injuries were reported. Unist’ot’en Camp said police took down tents at the 39-kilometre camp, even though that camp isn’t blocking the road.

"While optically, due to the number of police officers deployed, our presence may appear imposing,the RCMP said in a statement. "In reality, a minimal amount of force was required to support the arrests or removal of individuals from within the exclusion zone."

Coastal GasLink is owned by TC Energy, the Calgary-based energy company formerly known as TransCanada Corp. The planned 670-kilometre pipeline would deliver natural gas from the Dawson Creek region of northeastern B.C. to the proposed LNG Canada facility in Kitimat, B.C., for processing and export, cutting through Wet’suwet’en territory.

Under Wet’suwet’en law, authority over the nation’s 22,000 square kilometres of unceded territory lies with hereditary chiefs from five clans, who oppose the pipeline.

But TC Energy did receive a stamp of approval from some elected Wet’suwet’en band councils, which were created Canada’s colonial Indian Act. The elected councils have jurisdiction over reserve lands but not the area adjacent to the pipeline.

The hereditary chiefs’ land claim is backed by a 1997 Supreme Court of Canada decision, which affirmed that the provincial government can’t take away the Wet’suwet’en right to their land. But many key aspects of the dispute remain unresolved, as the court also sent the case back for a second trial that hasn’t yet happened.

The RCMP began ramping up police presence on Wet’suwet’en territory on Jan. 13, putting up a blockade at the 27-kilometre mark of the road. In the weeks since, the RCMP started deploying large numbers of officers to the surrounding towns as they prepared to enforce the second injunction, conducting daily surveillance-helicopter flights over Wet’suwet’en camps.

Though the hereditary chiefs and the province agreed last week to seven days of talks to de-escalate the situation, the talks broke down Tuesday night. One Wet’suwet’en hereditary chief, Smogelgem from the Fireweed Clan, said on Twitter that the discussions stalled when the province refused to consider pulling Coastal GasLink’s permits.

“This is not the outcome we wanted,” said the company’s president, David Pfeiffer, in a statement released Thursday. “It’s truly unfortunate that we were unable to find a path forward that allowed for the construction of Coastal GasLink with the support of all."

In a statement, Grand Chief Stewart Phillip, president of the Union of BC Indian Chiefs (UBCIC), said the B.C. government’s actions have been hypocritical. He also called on the RCMP to step down and for the Crown to claim responsibility for the conflict.

“We are in absolute outrage and a state of painful anguish as we witness the Wet’suwet’en people having their title and rights brutally trampled on and their right to self-determination denied,” the statement reads.

Phillip pointed to a B.C. bill, passed in November, that aligned the province’s laws with the United Nations Declaration on the Rights of Indigenous Peoples (UNDRIP), a landmark document that, among other things, protects Indigenous Peoples’ right to consent to resource-development projects on their territories.

B.C. Premier John Horgan has said the bill is not retroactive and the pipeline will go ahead.

“Forcing Indigenous peoples off their own territory is in complete and disgusting violation of the United Nations Declaration on the Rights of Indigenous Peoples, which the Horgan government recently committed to uphold through Bill 41, and which the (federal) government has also committed to uphold through yet to be introduced legislation. Indigenous rights are human rights and they cannot be ignored or sidestepped for any reason in the world, and certainly not for an economic interest.”

Assembly of First Nations (AFN) National Chief Perry Bellegarde said the violence against the Wet’suwet’en is a human rights violation.

“We will never achieve reconciliation through force,” Bellegarde said in a statement Thursday. “The AFN supports the governance and decision-making process of the Wet’suwet’en leaders. Canada and B.C. should do the same.”

The David Suzuki Foundation and Greenpeace Canada have also sharply criticized the raids.

On Twitter, the Gidimt’en Checkpoint asked supporters to bring food and extra sleeping bags to a camp at the 27-kilometre mark on the forest road. “The roads are open for now, although we don’t know for how much longer,” the post read.

Solidarity demonstrations have been confirmed in 17 cities, according to a Facebook event.

In Ontario, protests shut down Highway 403 near Hamilton and halted VIA rail trains in Kingston and Belleville. In B.C., demonstrators marched at the Legislature in Victoria and blockaded the Port of Vancouver. More actions are planned for Friday.

thank god we can follow what is really happening with direct video links filmed on site by brave journalists and protesters. Write and call Turdeau and Horgan and your own MP and let them know your opinion of this use of force. If they don't feel the heat from settler middle class folk, they will continue with impunity to violate FN land and human rights for the benefit of corporate profit. (as if any of that profit is staying in Canada---but that is another story) Shame on us if we don't react.
Imagine that they routed that pipeline right down mainstreet of Houston the town near Wet'suwet'en territory--actually a perfectly good line to go through to get to Kitamat. Just imagine the cries of outrage from those folks---"-but the piepline is VERY safe and won't disrupt anything important relative tonational interest" I'm sure Trans Canada would answer (NOT)

We got here because for

We got here because for untold generations we have been following the treacherous human playbook of domination, elimination, and exploitation for survival success. The survival part is inevitable. The "success" part is the invention, within the human brain, of the reward mechanism that leads to greed. Greed, requires the moves in the playbook for satiety. Unfortunately, the human brain is never satisfied. Too much is not enough.