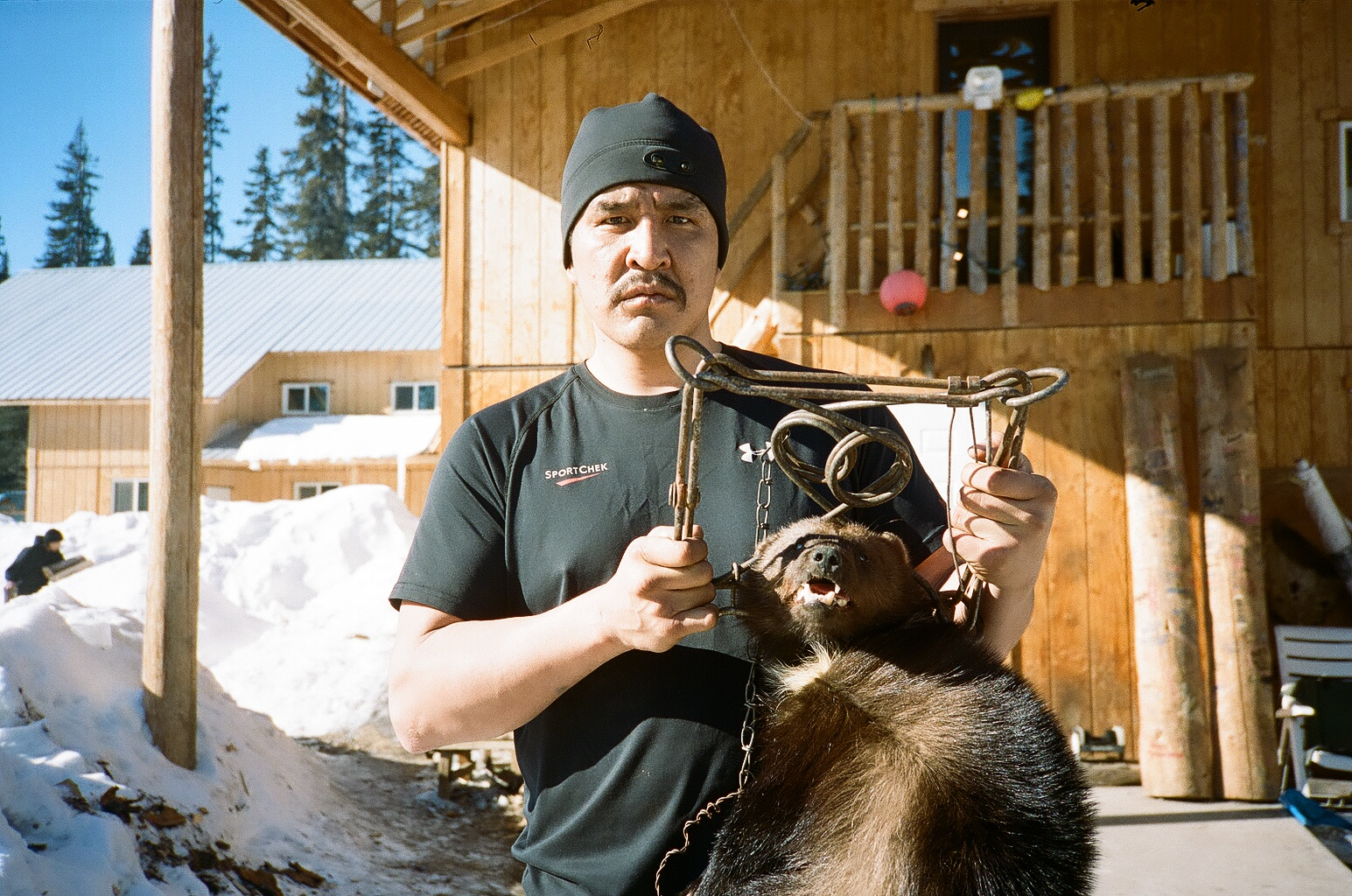 Johnny Morris, Gidimt'en Clan, poses with a wolverine in front of the Unist'ot'en Healing Centre. Trapping and other land based cultural activities are part of Healing Centre programming. Photo by Michael Toledano
Previous story
Next story

Unist’ot’en Camp, a reoccupation of Wet'suwet'en Nation land in British Columbia, is calling for the province to halt a pipeline because officials ignored potential harms to a nearby healing centre.

Coastal Gaslink is a 670-kilometre proposed natural-gas pipeline that would run near the camp on Wet’suwet’en territory in northern British Columbia, against the opposition of all the nation’s hereditary chiefs and an increasing number of supporters.

“We have faced centuries of colonial oppression, racism and traumatic experiences as Indigenous people,” said Dr. Karla Tait, the clinical director of Unist’ot’en Healing Centre, where the community offers safe space for members to reconnect with traditional practices to recover from grief, loss and trauma related to historic and ongoing colonialism.

“Our connection to land and the cultural practices that extend from this connection are the most effective source of resilience and healing for our people.”

Despite Premier John Horgan’s recent statement that Coastal Gaslink has all the permits it needs to proceed, the B.C. Environmental Assessment Office (EAO) is still assessing whether the company’s final report on the impacts of the project and its plans to mitigate them meets the government’s requirements.

Such reports are generally required to consider wilderness lodges, tourism outfitters and other institutions with economic or social benefits. But in its filing, the company didn’t say how the pipeline would affect the nearby healing centre, operated by Unist’ot’en House in their unceded territory.

“The (final) report is incomplete, as (Coastal Gaslink) failed to consider or even mention the Unist’ot’en Healing Centre,” the statement said.

“As a result, Unist’ot’en has requested that the EAO continue to withhold final permits for construction… Historically, Indigenous cultural, social and economic practices have been dismissed and devalued by colonial regulatory bodies, perpetuating institutional racism.”

In an emailed statement, the B.C. Ministry of Environment and Climate Change Strategy said the EAO is reviewing Coastal Gaslink’s final report over the next few weeks to see if it meets the necessary requirements.

“That review process includes feedback from other parties, including the Wet’suwet’en,” the statement said.

The B.C. government may allow Coastal Gaslink to go ahead without looking at how the pipeline could harm a $2-million healing centre, said Unist'ot'en Camp.

The statement also said that the BC Oil and Gas Commission is responsible for most of the permits required for natural gas projects.

TC Energy, the Calgary-based company that would operate the pipeline, didn’t immediately respond to a request for comment (Coastal Gaslink Pipeline Ltd., a subsidiary of TC Energy, is developing the project).

The healing centre is about 1,200 kilometres away from Vancouver, accessible by a northern B.C forest service road in the Unist’ot’en territory of Talbit Kwah.

Members of the Wet’suwet’en Nation have set up three camps along the road in an effort to halt Coastal Gaslink. Construction started in 2010 with the intent to “enforce the (1997 court) decision to preserve the territory for future generations” and block future pipelines, according to the Unist’ot’en Camp website.

Last week, B.C. Premier John Horgan publicly stated that the $6.6- billion Coastal Gaslink pipeline project would go ahead according to “the rule of law.” The meaning of his statement is complicated by a 1997 Supreme Court of Canada decision affirming that the Wet’suwet’en have never ceded rights to their territory and the hereditary chiefs retain decision-making power, though some details of the land claim haven’t been settled.

On Monday, Horgan said he had asked B.C. Indigenous Relations and Reconciliation Minister Scott Fraser to meet with the Wet’suwet’en hereditary chiefs to “find a path forward.”

The standoff cooled down last year after hereditary chiefs, concerned about safety after the raid, reached an agreement with Coastal Gaslink to allow the company into the territory for pre-construction work. But tensions remained and have been rising again since Dec. 31, when a B.C Supreme Court judge extended an injunction to force out the Wet’suwet’en in the camps and allow construction on the pipeline to continue.

Days later, five hereditary chiefs sent TC Energy an eviction order, and the company again halted its activity in the area. The RCMP have said they’re not yet enforcing the injunction to “allow time for dialogue,” but have set up a checkpoint along the road to restrict access.

The healing centre is “the fruition of decades of planning and de-colonizing work,” Dr. Tait said in the statement. The community and its supporters have poured more than $2 million into the construction of the centre, and the institution recently received a $400,000 grant from the First Nations Health Authority to continue to run land-based trauma and addictions treatment programming.

Programs grounded in Wet’suwet’en knowledge systems are currently being implemented by the Unist’ot’en. Already, the statement said, pre-construction activity has interfered with the healing centre’s hunting, trapping and harvesting programs.

RIGHT NOW indigenous youth are blockading the Ministry of Energy and Mines in Victoria BC. We refuse to move until MLA’s meet the demands of Wet’suwet’en Hereditary Chiefs. We will do whatever it takes to defend our lands and rights. CGL and RCMP withdraw from Wet’suwet’en lands. pic.twitter.com/Drf1yswMso

The treatment offered at the healing centre reflects Wet’suwet’en beliefs that everything is connected to the land, water and air.

“This vision of healing through cultural revitalization and reconnection to the land is the foundation of our land use plan, and it depends on healthy, intact land,” Dr. Tait said in the statement.

“It requires uninhibited access to our territory which contains all the relatives (aka, resources) necessary to comprehensively practice our culture including a pristine water source, plants, medicines and animals to sustain us, physically, mentally, emotionally and spiritually.”

The company has offered to deliver potable water to the healing centre if pipeline construction pollutes the nearby Wedzin Kwa River (Morice River), from which the centre draws its drinking water, a solution Unist’ot’en Camp said is “woefully inadequate.”

“The river is a pristine source of drinking water for the healing centre and nearby towns, and a salmon spawning estuary that is tributary to two major river systems downstream,” the statement says.

Coastal Gaslink has unearthed a profound division between the traditional Wet’suwet’en legal system, Canada’s legal system, those who have stood to protect the land in question and those who want to see the pipeline built.

As backed by the 1997 court decision, the Wet’suwet’en Nation is governed by its traditional legal system, which long predates Canada and under which hereditary chiefs from five clans have jurisdiction over its 22,000 square kilometres of unceded land.

Most Wet’suwet’en hereditary chiefs have opposed the construction, saying it would irreparably devastate lands, waters, critical salmon habitat and Wet’suwet’en ways of life. However, five elected band councils established under Canada’s 19th-century Indian Act have approved of the project, citing the economic benefits it promises and fuelling division between Wet’suwet’en community members, families and clans.

Coastal Gaslink has consulted with the elected band councils, which have jurisdiction over reserves under Canadian law, but hasn’t received consent from the hereditary chiefs as required under Wet’suwet’en law.

Wet’suwet’en hereditary leadership have not and do not stand alone in their defence, and have been backed by Indigenous leaders from across the country and beyond. Major protests in support of Wet’suwet’en traditional governance have taken place for years, and have picked up over the past weeks, as tensions continue to rise.

"Contrary to recent statements by Premier John Horgan, CGL does not have its final permits to proceed with pipeline construction."#unistoten #wetsuwetenstrong pic.twitter.com/8LJ9ultmDv

Consultation is not consent

The Coastal Gaslink dispute has drawn international criticism, with critics pointing to the contradiction between the provincial government’s support for the pipeline and the United Nations Declaration on the Rights of Indigenous Peoples (UNDRIP). Two months ago, B.C. passed a bill to align its laws with UNDRIP, a landmark international document that, among other things, gives Indigenous people the right to be consulted over resource projects on their territories.

Arguing that these standards have not been upheld, the UN Committee on Racial Discrimination has urged Canada to halt the pipeline project until “free, prior and informed consent” is obtained from Indigenous peoples.

Canada has nine different pieces of federal legislation that have articulated the recognition and affirmation of UNDRIP and the declaration has been reaffirmed 11 times by the UN General Assembly.

I live in Langley. There are

I live in Langley. There are gas and oil pipelines that travel through a corridor in the community. Virtually all of it is buried. While there is always some risk involved, nothing negative has happened in the nearly 30 years we have been here. Probably there are people here who would oppose it and others who would support it. We are no more united on these issues than the indigenous community. I would like to know specifically how a similarly buried pipeline will disrupt this healing centre, without all the emotionally charged arguments that seem to get repeated over and over, as if they substitute for rational thought.

What is underground still

What is underground still goes into the water. When a gas pipe leaks and spews a column of fire, it'd start a forest fire there. If you take a look at the territory, it's all evergreen forest.
Burnaby, not far from you, has seen a huge spill in a residential area, where last I heard people could still not grow vegies in their gardens.