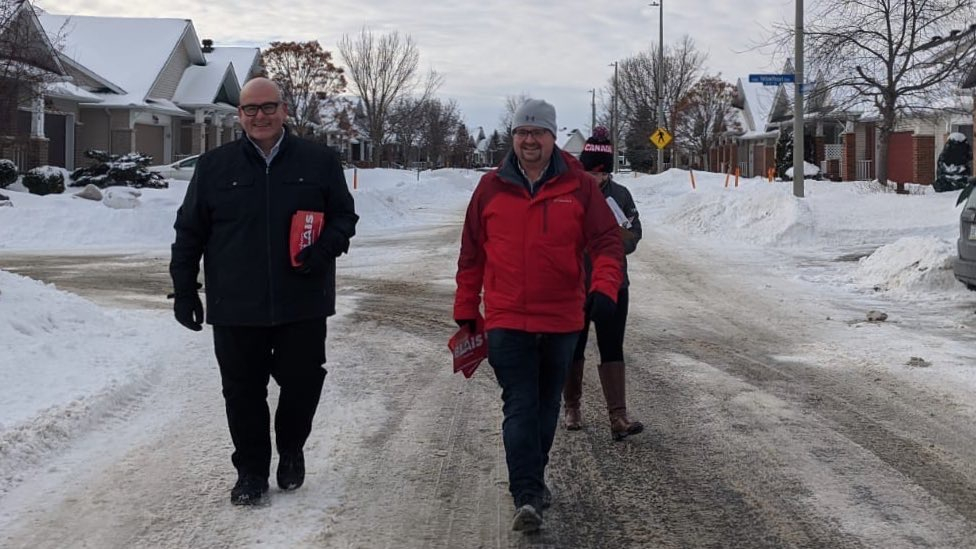 Steven Del Duca is campaigning with Steven Blais ahead of a by-election in Orleans later this month. Photo supplied by Del Duca's leadership campaign
Previous story

Steven Del Duca looks set to become the next leader of the Ontario Liberal Party.

“Tonight, after carefully evaluating the results, I am truly humbled by the vote of confidence I have received from our party membership,” Del Duca said in an emailed statement late on Sunday.

Michael Coteau and Kate Graham were in a very close race for second, the source said.

Del Duca, who had served as transportation minister under former premier Kathleen Wynne, lost his Vaughan seat when the Liberals were unceremoniously dumped by voters in July 2018.

Coteau and another leadership contender, Mitzie Hunter, had also served in the Wynne government and were two of the seven Liberal MPPs to retain their seats after that major electoral setback for the party after 15 years in government.

The next provincial election is in June 2022. Some recent polling has showed the Liberals as most preferred party despite the leadership vacuum, as Premier Doug Ford's Progressive Conservatives struggle to find support for sharp budget cuts and as they battle striking teachers and education unions.

Thousands of party members voted to send up to 2,092 delegates to a leadership convention on March 7. In addition to the elected delegates, some 350 “superdelegates” can vote due to their standing in the party, such as current and former MPPs and riding association presidents.

“My priority is to continue to work relentlessly, as I have since day one, to ensure our Party is energized and united, and focused on the task that lies ahead,” Steven Del Duca on winning more than 50% of support for Ontario Liberal leadership

Del Duca has more than 120 endorsements from such ex officio delegates.

With more than half of the elected delegates backing Del Duca and strong support from party insiders he would likely be acclaimed leader on the first ballot.

Official numbers are expected to be released by Wednesday or Thursday.

Results from five remote ridings where ballots were mailed in will not be known until Monday, while counting was still ongoing at time of publication in three ridings who held votes on Sunday.

“My priority is to continue to work relentlessly, as I have since day one, to ensure our Party is energized and united, and focused on the task that lies ahead,” Del Duca said in his statement. “We must defeat Doug Ford in 2022 so that we can invest in public education, public health care, economic prosperity and our environment.”

Del Duca is proposing to form an all-party committee to fight climate change, and has said he’d cut transit fares in half for those able to travel outside of rush hour to ease maximum capacity pressure.