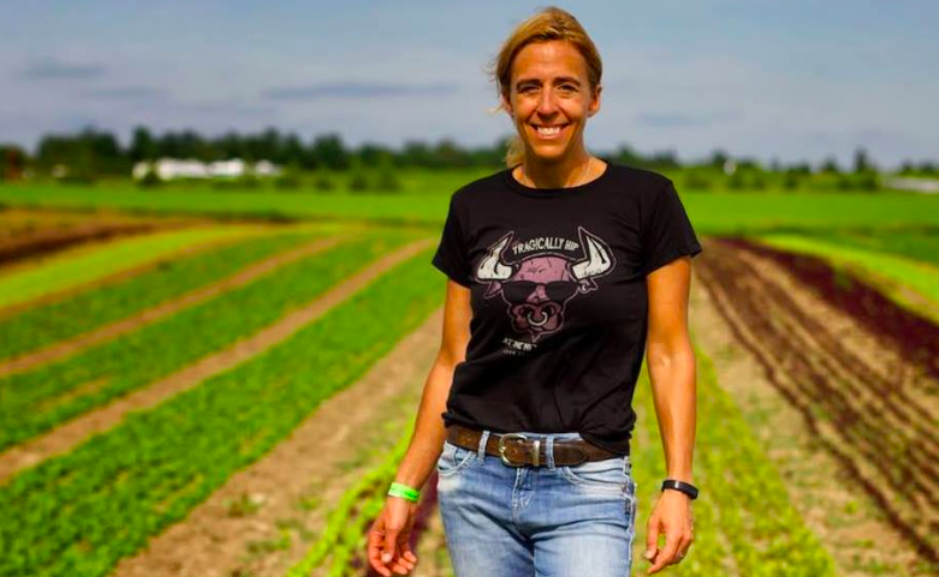 Gillian Flies stands among the salad greens growing on her organic farm in June, 2015. Photo by Jason van Bruggen
Previous story
Next story

Agriculture is a major contributor to Canada’s greenhouse gas emissions. At the same time, farmers are hit by some of the worst effects of climate change. But a coalition of farming groups says they can also be a part of the solution.

Farmers for Climate Solutions is calling for agricultural policy to be redesigned with a climate change lens placed over the entire framework. That means boosting the efforts of farmers to reduce their emissions, enhance soil health and increase resilience to extreme weather.

Measures to rein in emissions from agriculture, which would include reducing reliance on costly synthetic fertilizers and herbicides, should also improve farmer’s livelihoods, said the coalition, whose members includes the National Farmers Union, Canadian Organic Growers, FarmFolk CityFolk, Rural Routes to Climate Solutions and the Ecological Farmers Association of Ontario.

“Farmers are on the front lines of climate change. They’re dealing with the impacts already and being required to find solutions,” said Jane Rabinowicz, the executive director of SeedChange, another member of the coalition. “What we’re saying is the burden shouldn’t be on farmers alone.”

Rabinowicz and others in the coalition said government has an important role to play in spreading the word about successful farm innovations and helping to scale them up.

“Extension service” refers to the application of new scientific methods to farming.

Spreading the word about good practice

Gillian Flies, the president of Canadian Organic Growers, represents the type of success story the coalition hopes can be emulated across the country.

Agriculture accounts for 12 per cent of GHG emissions in Canada, according to a report released in December by the National Farmers Union. But the industry is also a promising place to target for fast and effective solutions.

She and her husband, Brent Preston, work full-time on their 100-acre, certified organic farm in Creemore, Ont., growing salad greens and cucumbers, and supplying some 150 restaurants and a handful of retail stores.

They have implemented several regenerative practices, which have had a notable effect on their ability to produce in tougher weather conditions.

These include planting some 12,000 trees, installing 18 beehives and creating protected pollinator and wildlife areas. They also use cover cropping — planting non-yielding crops to suppress weeds, improve soil quality and manage erosion — and have shifted away from tilling, which releases carbon into the atmosphere and leads to less water retention.

The measures are producing tangible results.

“Last summer, we had really high temperatures and a long drought, and we were still able to germinate arugula and spinach while farmers in our area who were tilling couldn’t,” Flies said in a phone interview, noting that a research trial they were involved in showed that their soil was 6 degrees cooler than soil on a neighbouring farm.

“It’s intimidating until you know how to do it and you hear success stories from other farmers demonstrating their increased profitability, but it really is an opportunity for all farmers,” Flies said.

Soil degradation cost farmers $3.1 billion in lost yield in 2011, according to researchers at the University of Manitoba. It has removed between $40 billion and $60 billion from gross domestic product since the 1970s, they calculated.

The coalition is hoping to see their views reflected in the next five-year plan of the Canadian Agricultural Partnership, a $3-billion funding mechanism from federal, provincial and territorial governments. The next one will map out policy priorities for 2023 and onwards.

Ottawa on Monday shelled out $2 million from the fund to cover half the costs of grain drying, after heavy rains led to a wet harvest last year, meaning dryers had to burn more fuel for longer periods to prevent crops from rotting.

Agriculture accounts for 12 per cent of GHG emissions in Canada, according to a report released in December by the National Farmers Union, one of the members of the coalition. But the industry is also a promising place to target for fast and effective climate solutions, they said.

The group estimates that the reimagining of farming they are calling for could cut those emissions by 30 per cent by 2030 and perhaps by 50 per cent by 2050.

Up next: a Green New Deal for farmers

The January issue of Canadian

This is very encouraging. Farmers have much to lose as things heat up and weather becomes less predictable. That they are being proactive and looking to more environmentally friendly and healthy solutions is a credit to them.

Great article and makes total sense. The missing piece is not the what we need to do , but how to make it happen yesterday. I would at least suggest that the coalition put out an AVaaz or other petitioning org. campaign to have a teeny hope of making it politiclaly viable i.e. on the public radar....especially swing voters in swing ridings ....who are the only ones politicians track....