The Wet'suwet'en told supporters to 'shut down Canada.' Now trains are cancelled nationwide 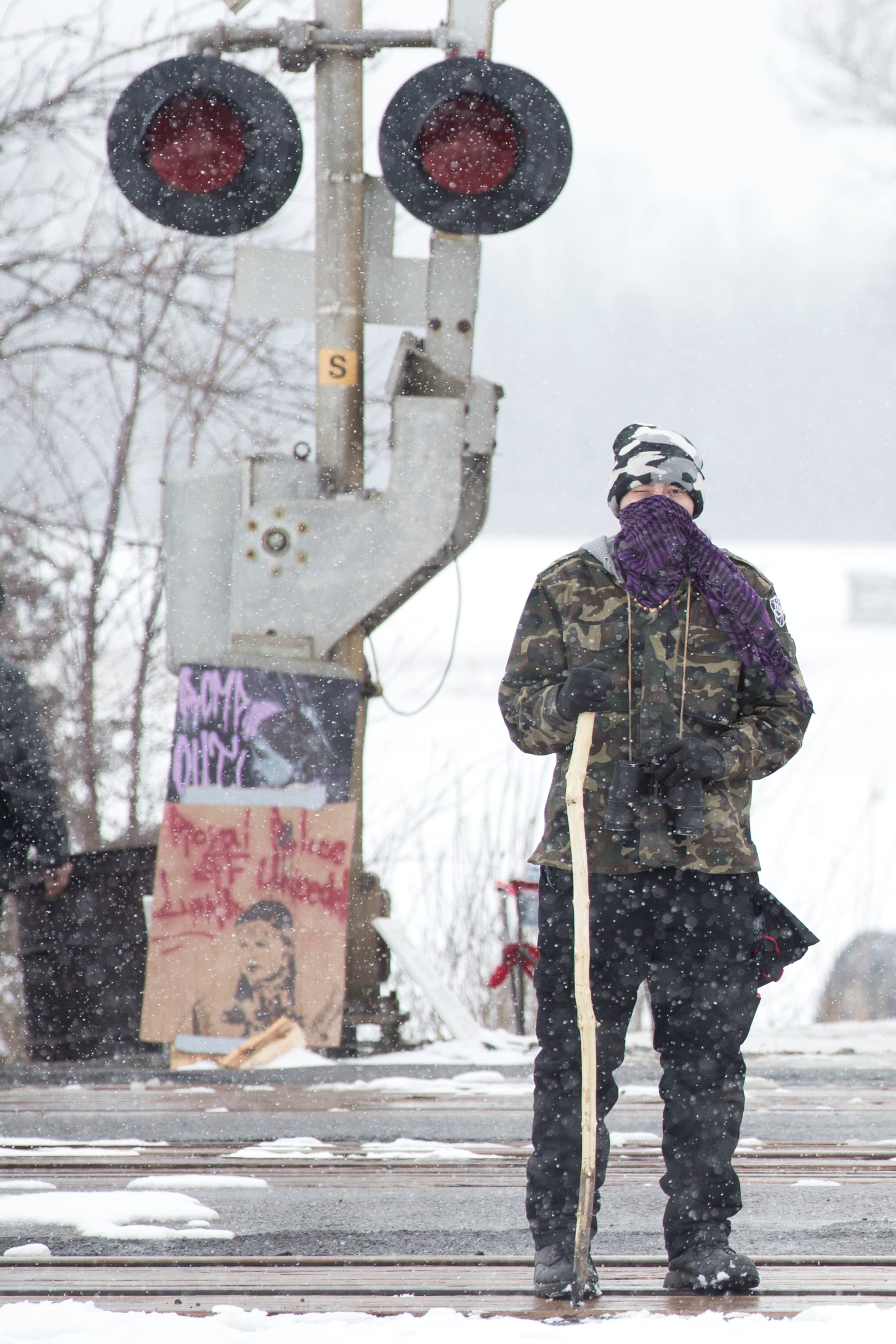 A protester stands on the closed train tracks on Day 8 of the protest in Tyendinaga Mohawk Territory, near Belleville, Ont., on Feb.13, 2020. Photo by Lars Hagberg / The Canadian Press
Previous story
Next story

Last week, as militarized police arrested members of the Wet’suwet’en Nation in British Columbia to clear them out of a pipeline’s path, Canada’s decision-makers didn’t seem to be paying attention.

Premier John Horgan had declined to meet with the nation’s hereditary chiefs, who oppose the planned pipeline that would run through their traditional territory. Prime Minister Justin Trudeau refused as well, deferring to the province. And RCMP officers were advancing down a logging road where Wet’suwet’en community members were camped out to block the project, raiding checkpoints one by one.

And so Molly Wickham, a spokeswoman for one of the Wet’suwet’en Nation’s five clans, Gidimt’en, issued a plea.

“Stand up and fight back with us,” Wickham said in a grainy video posted to Facebook.

“Shut down Canada. Do whatever you can do.”

People listened. And on Thursday, their efforts seem to have culminated in a level of disruption that’s near-impossible to ignore: after eight days of protests blocking key rail lines, CN Rail announced Thursday that it would temporarily shut down all of its operations east of Toronto. Via Rail, which uses CN’s tracks, cancelled passenger-train service across the country.

Now, it appears everyone from Bay Street to Parliament Hill to the dinner table is paying attention.

Even before the announcements Thursday, industrial groups were sounding alarms about the risk to Canada’s economy, with repercussions rippling into agriculture, mining and forestry. Afterward, the union representing CN workers warned of possible layoffs.

“Our union — and thousands of working families — are in crisis,” said a statement from the national president of Teamsters Canada, François Laporte, who called the rail blockades a “catastrophe.”

“This situation cannot go on forever.”

The Wet'suwet'en asked supporters to 'shut down Canada.' Now, trains are cancelled nationwide.

Not everyone is supportive of the Wet’suwet’en cause: a poll released by the non-profit Angus Reid Institute on Thursday showed that Canadians are very much divided on the issue, with two in five supporting the Wet’suwet’en solidarity protesters and a little more than half favouring Coastal GasLink. Oil-rich and pipeline-friendly Alberta was far less likely to support the Wet’suwet’en than people in B.C. or Quebec, and those who supported the protesters were more likely to be young women, lower-income and politically left-leaning.

But the magnitude of the demonstrations has been significant, shutting down roads, bridges and other key infrastructure in addition to rail lines.

“The only way they’re going to pay attention is if we hit them where it hurts: their economy,” Sedalia Kawennotas, a Mohawk elder, told the Montreal Gazette this week. “If this is an inconvenience for commuters, think about us.”

Many of the demonstrations are Indigenous-led ⁠— the Mohawks of Tyendinaga, for example, have set up a blockade along a rail line near Belleville, Ont., effectively shutting down one of the most crucial rail corridors in the country. But as photos across social media show, many of the protesters are non-Indigenous, too.

In Victoria, protesters blocked all entrances to the B.C. legislature on the day of the throne speech. And 57 people were arrested in Vancouver on Monday for blocking ports. More have occupied politician’s offices across the country.

Horgan has now said his government is willing to meet with Wet’suwet’en and Gitxsan hereditary chiefs to discuss a rail blockade in northern B.C. The Gitxsan had been blocking the rail line there in support of their Wet’suwet’en neighbours. Trudeau personally wrote to the chiefs to pledge to send Crown-Indigenous Relations Minister Carolyn Bennett.

Horgan and Trudeau spoke on the phone Thursday about the urgent need to resolve the blockades, the Prime Minister’s Office said. Both politicians campaigned on messages of reconciliation, but have also supported Coastal GasLink and taken criticism in recent weeks for the apparent contradiction.

In an open letter to federal Transport Minister Marc Garneau, Canadian Chamber of Commerce president and CEO Perrin Beatty said the rail disruption is an “emergency for the Canadian economy.”

Beatty warned that the rail disruptions are blocking perishable goods, such as grain, along with timber, aluminum and propane, for Quebec and Atlantic Canada.

“Factories and mines may soon face difficult decisions about their ability to continue operations, and the damage to Canadian supply chains will extend beyond our borders and harm our reputation as a stable partner in international trade,” the letter said.

“We urge the government to act without further delay.”

Reconciliation is dead. Revolution is alive.

The confrontation over Coastal GasLink

RCMP officers were enforcing a court injunction to force the Wet’suwet’en and their supporters out of the path of Coastal GasLink. The natural gas pipeline would run through the nation’s unceded territory, even though the Wet’suwet’en hereditary chiefs have not consented.

Under their traditional law, hereditary chiefs of five clans have authority over the nation’s 22,000 square kilometres of unceded land. The community has since built four camps along a remote forest road in the territory as it attempts to block the project.

The owner of Coastal GasLink, TC Energy (formerly known as TransCanada), touts agreements it has made with elected Wet’suwet’en band councils, which were created under Canada’s colonial Indian Act. The hereditary chiefs say the elected councils have jurisdiction over reserve lands, but not the area adjacent to the pipeline, and point to a 1997 Supreme Court of Canada decision that backs their land claim.

Last year, officers enforcing an earlier court injunction violently arrested 14 people at one Wet'suwet'en camp. This year, heavily armed police arrested 28 people over five days of raids, from Thursday to Monday. Though the enforcement of the injunction has ended, the RCMP maintains a presence in Wet’suwet’en territory.

It’s not clear how long it could take for officials to clear the rail blockades. Though CN Rail has obtained injunctions to force protesters off the railroad tracks, local police haven’t yet enforced the court orders.

The Gitxsan agreed to take down their blockade ahead of their meeting with provincial and federal officials. But others, such as the Mohawks of Tyendinaga, say they won’t leave until the RCMP pulls out of Wet’suwet’en territory.

MY PLEDGE: In solidarity with

MY PLEDGE: In solidarity with the Unist'oten and Wet'suwet'en, I am not buying ANY CANADIAN PRODUCTS AT ALL until Horgan meets with the Hereditary Chiefs and begins a process of reconciliation that will end the illegal occupation of Wet'suwet'en land. #SHUTDOWNCANADA