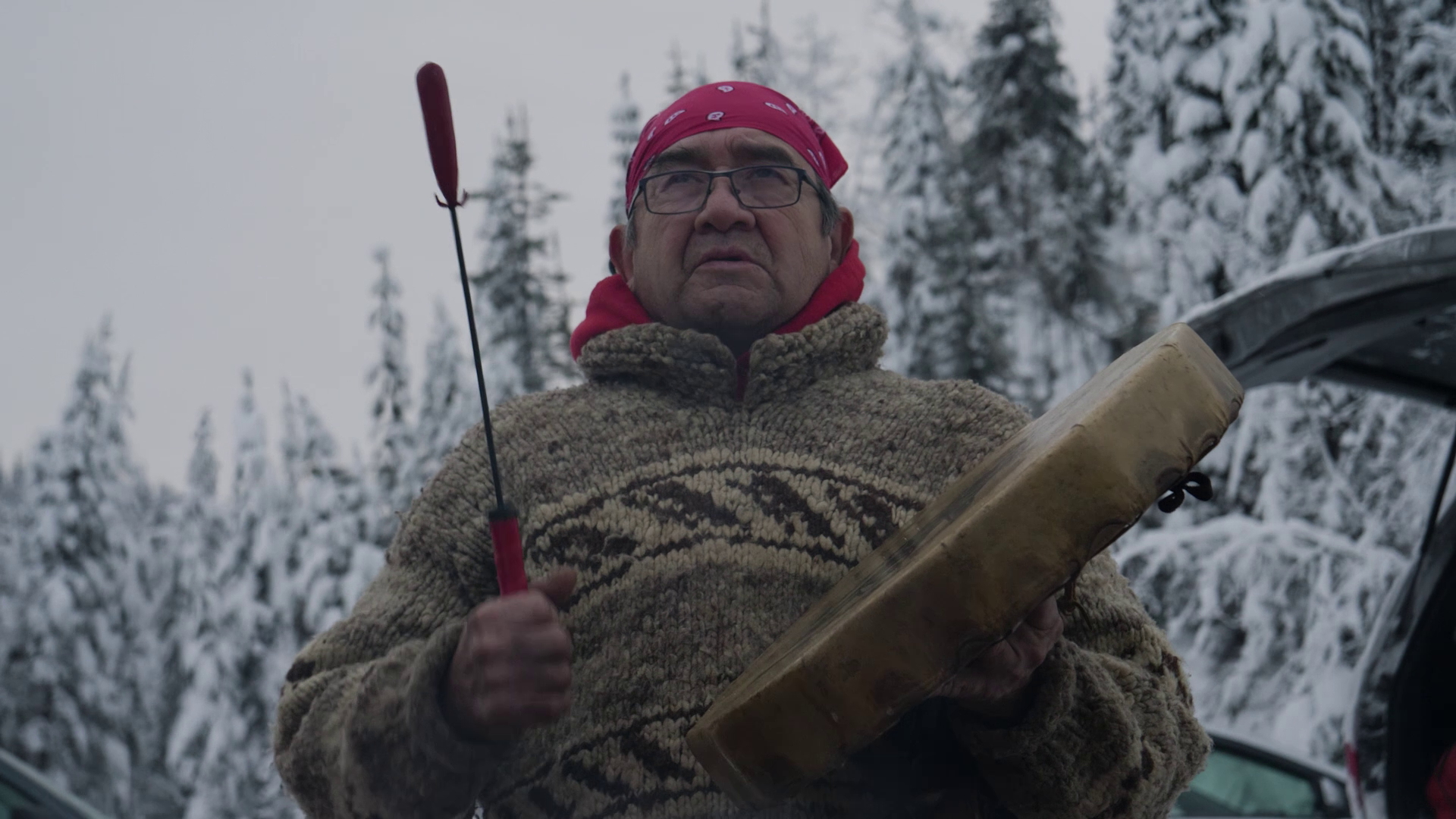 Lekeyten of Kwantlen First Nation, photographed at the Gidimt'en Checkpoint on Wetsuewt'en territory in 2019. Photo by Michael Toledano
Previous story
Next story

It took longer than it should have, but Canadians are finally paying attention to the struggle at Wet’suwet’en. The hereditary chiefs and supporters first built cabins on their traditional territory in 2010 to try to stop a pipeline from being built across their land but their campaign has grown thanks to effective solidarity actions.

The camps at Wet’suwet’en are trying to stop Coastal GasLink from building a pipeline through their traditional territory. The pipeline will carry liquefied natural gas (LNG) to a port at Kitimat where it can be shipped overseas, making a few people extremely rich.

In solidarity with their camps, actions and blockades have been set up all over Canada. Regular protests, including in Vancouver and Victoria, have stopped traffic, disrupted ferry service and even pushed the Throne Speech back, as politicians were physically blocked from entering the Legislature.

People have occupied banks and have shut down highways. But the highest profile actions right now are happening along rails: supporters have occupied railway tracks in Toronto, at Tyendinaga Mohawk Territory on the Toronto-Montreal and Toronto-Ottawa rail corridors, and on the Candiac commuter rail line just outside of Montreal.

These actions are non-violent civil disobedience at their finest: they have caused economic disruption and, importantly, have forced Canadians to pay attention to the fight against Coastal GasLink.

The symbolism of choosing to shut down rail is important. Canada’s railway is entwined with our history of colonialism. Canada’s first major political scandal saw Prime Minister John A. MacDonald forced to resign for having accepted political donations in exchange for the contract that would be the railway.

The railway was the critical link that allowed Canada to flood the west with White settlers while also sending state troops to forcibly confine Indigenous nations to reserves. The railway played a key role in genocide.

And, the CPR was built using effectively slave labour from Chinese workers, as many as 4000 who died as a result extreme and dangerous working conditions.

When Indigenous people block rail lines, they’re targeting the veins of colonial Canada. By stopping the flow of blood, they are forcing Canadians to pay attention.

I love rail. Maybe it’s because my parents held early birthday parties for me at the Halton County Railway Museum in Rockwood, Ontario. Maybe it’s because I used to run outside, barefoot, whenever we heard the freight trains pass, half a mile up the road from my Grandmother’s house, and count the number of cars the train had. Maybe it was the faint memory I have of travelling to northern Ontario by train at the age of three and watching the sun dance through the tree branches we passed (those tracks have all been removed). There is a sentimental quality to watching the world pass while you’re on a train, and it symbolizes so many contradictions of living in a settler-colonial state.

That’s why these solidarity actions can’t simply be seen as protests. As Montreal Gazette journalist Christopher Curtis posted on Twitter, “In Kahnawake, the blockade of a commuter rail to Montreal is about solidarity with the #Wetsuweten but also pride in Turtle Island, in sovereignty, in securing a future for Indigenous youth across the country.”

The desire to push through this pipeline project under the guise of economic prosperity is another in a long list of examples where profits are king and the damage that a pipeline will cause to the land and air don’t matter. Our obsession with resource extraction will be our eventual demise. We know that the atmosphere is warming. We know that LNG pipelines leak methane into the atmosphere. We know that pipeline projects destroy forests and waterways. So why are politicians hell-bent on ensuring this project passes?

The LNG market is a trillion-dollar industry whose time may be running out. Large infrastructure projects like pipelines cannot get built without the full support of government, even if that support means sending in militarized state agents to force people off their land.

We need to listen to the Wet’suwet’en traditional leadership. We need to heed their call that this project is folly and needs to be stopped. They’re experts in knowing how to care for the land: they’ve been doing this for time immemorial.

We need to act before it’s too late, and Wet’suwet’en shows us the way.

you have made my day with

you have made my day with your writing here Thank you
Love the planet on Valentines day.
I am so glad to support this kind of journalism.. CN CP : "the veins of colonial oppression and genocide" indeed

Thanks for the most sensible

Thanks for the most sensible commentary I've seen on this subject. And for the reminder of the railways' role in populating the west. We are too prone to forget our history.

It's shameful, but once again

It's shameful, but once again, we see elders standing on the line, as they did on Haida Gwaii, defending their traditional food gathering area from logging, like in the "war in the woods" on Vancouver Island in the 1980's, and in Mohawk territory in the 90's. Here we are, having to learn this lesson again. Unceded territory should not be "up for grabs". That involves most of B.C., but these chiefs are asking for their healing centre to be considered and avoided. I don't think they are demanding that there be no pipeline at all. I agree that this is a brilliant use of peaceful protest.