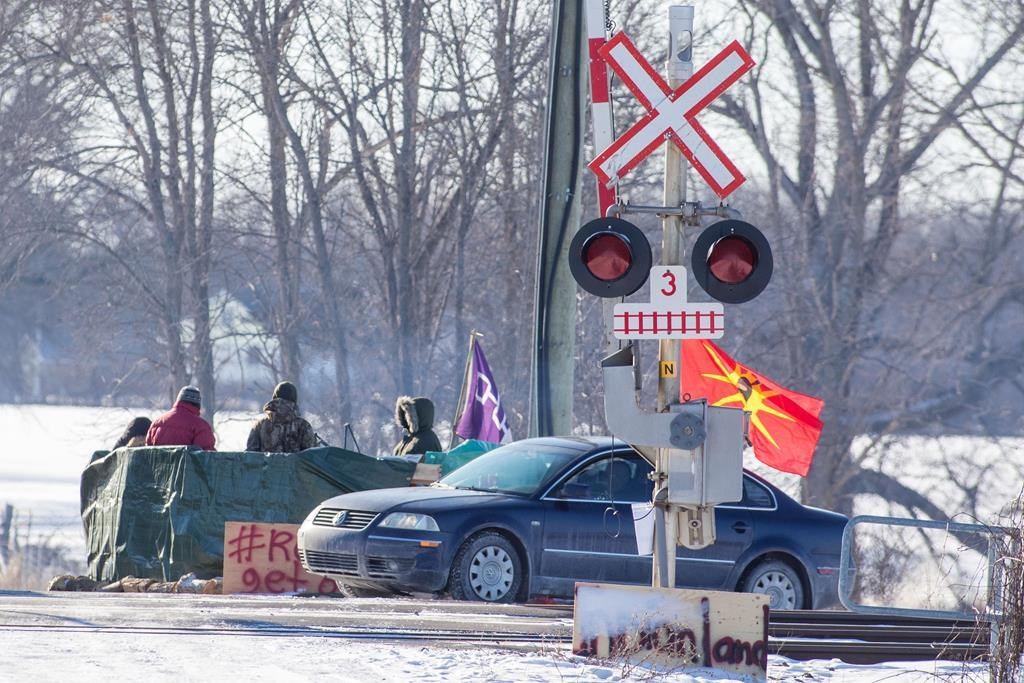 Protesters stand on the closed train tracks on the ninth day of the blockade in Tyendinaga Mohawk Territory, near Belleville, Ont., on Friday, Feb. 14, 2020. File photo by The Canadian Press/Lars Hagberg
Previous story
Next story

Kenney says Canada is a commodity-producing country and most of those go by rail.

He says if rail service isn't restored soon, thousands of jobs are at risk because of what he calls "angry fringe groups."

The blockades started with a protest by some Indigenous groups over the Coastal GasLink natural gas pipeline that would pass through First Nations territory in British Columbia.

Prime Minister Justin Trudeau says the disruptions must be resolved through dialogue, not by ordering in the police.

Kenney won't say what he thinks Trudeau should be doing.

But he did say Friday that he believes "this is not just a regional issue and it's not just isolated. This has become a national economic crisis."

Kenney noted there are domino effects from the shutdown that are affecting people, including rail workers and agriculture producers.

"It means that our farmers here in the West are going to have a harder time getting their products to market," said Kenney.

"And guess what? Our farmers — they don't have defined benefit pensions. They don't have job security. They don't get paid unless that grain gets loaded onto the trains. Trains that are now being shut down.

"I think Canadians are losing patience with this. I know Indigenous people are."

This report by The Canadian Press was first published Feb. 14, 2020

I presume when Kenney talks

I presume when Kenney talks about farmers not having salaries and benefits, he means to imply "like me".

Kenney, Sheer, and their ilk are full of bluster, but have no real solutions to offer. Do they somehow think that those in the government do not understand what is at stake? Or, is it just that they mean to imply that "only we" know what is at stake? What is their point? Do they want use of force throughout this country to push their point of view? What is their solution? What will they say when then, someone takes it too far, and lives are lost? What then?

Everyone in the equation knows Canada has more power of all kinds than those who are protesting. How and when you use that power is what defines you as a nation. This is one of those times when our most important societal principles will be tested. Cheap shots from the cheap seats are not helpful, and only inflame the situation.

"I think Canadians are losing

"I think Canadians are losing patience with this. I know Indigenous people are."

The Indigenous people I know are proud of the Mohawk blockade!

By now, after the march in

By now, after the march in Toronto yesterday (which would have been much larger had there been better publicity about it), there should have been no doubt about the public support for the Wet'uwet'en people.
Personally, I cheered in front of the TV, all alone in the dark.
I think not only Kenney and Scheer, but Trudeau and all his ilk also have seriously misread the measure of support that exists both inside and outside Alberta and BC, for the First Nations, and for rapid transition off oil.
And no one I've talked to (and I strike up conversations pretty much wherever I go) is in favor of that pipeline crossing unceded Indigenous lands, over the wishes of the court-determined authority over the unceded territories. Hint, JT: it's not the "band chiefs" elected under The Indian Act.
And yet, who did he consult when he came back, after extending his trip abroad as long as he could? Seems he hoped to bundle quickly from that trip on to one for a vacation in the Caribbean.
He'd do well to consult with parties who don't have a stake in the outcomes preferred by his funders.
What in heaven's name is wrong with the guy, that *he* can't follow rule of law, and abide by prior court decisions that haven't been challenged!!
People gave him another chance, after the Raybould-Wilson affair. She won her seat back, even though all the other parties ran candidates. When the ethic commission released its report, he had the gall, nonetheless, to claim that he "did nothing wrong."
Clearly, he doesn't understand the difference between a people and a nation! Can you imagine him trying to force a pipeline through the US, because Mexico said it'd be OK? Or because SanFrancisco took a vote and said it'd be alright?
It seems their strategy is to maximize disruption across the nation, with the hope of dividing the support for First Nations between those inconvenienced, and those not.
But no amount of disruption would change the sympathies of any of the people I know, for reconciliation or for rapid de-carbonizing.
And no one I've talked to buys the bafflegab about cutting natural gas with hydrogen.
I think both the BC and the federal governments have seriously "misunderestimated"* the sympathies of the electorate. Not to mention the ever-thinner tolerance of all the talk that's not talked, with no walk following it.
Climate threat hits the middle class, once they make the links to flood, fire, wind and rain.
The message that needs to be made clear now is that a lot of the GWGs already emitted won't show up in weather events for decades, and that their little kids will have to live in a world with few jobs, expensive housing, inadequate healthy food, and roving bands of predators seeking to get necessities they haven't the money to buy. Probably not the kind of "laws of the marketplace" they'd anticipated when they voted for Harper, and which those with a different sensibility likened even then to "law of the jungle."
To paraphrase the Jolly Green Giant, now that we understand that it's not just a matter of it being "not nice: "You just can't fool Mother Nature."

Someone needs to point out to

Someone needs to point out to Mr. Kenney that climate change deniers are clearly now the "angry fringe group." Science got out, despite the efforts of the right wing and the allied fossil fuel industry to stifle it, and to pretend that our advances and our security don't rely on it. There's diminishing tolerance for wilful dangerous ignorance amongst our so-called "leadership".

Look what's happened in China because of the wilful stifling of science news, from a physician who recognized a dangerous viral epidemic shaping up, and blew the whistle. Now multiply that impact millions-fold, because there isn't going to be anywhere for us all to hide, when our climate is heating uncontrollably. Lesson: you can't silence the impact of the truth, even if you can for a while silence the truth.

Funny how Mr. Kenney neglects to mention how many of those Alberta Farmers are mad as hell at him and his gov't over property rights removed in the name of energy development on their lands. If this sounds somewhat similar to what the Wet'suwet'en peoples struggle is about, that is because it is similar. Both groups want justice and their property rights recognized by their governments. The only difference between the two groups is the color of their skin.

Kenney and his Rebel Media

Kenney and his Rebel Media friends are the fringe group.

Kenney shouldn't talk about farmers not getting paid for their grain. He was part of the con federal government that stole the Wheat Board from the farmers. The CWB used to look after the interests of grain farmers better than any other organization.

"Radical fringe groups" is typically used by demagogues to describe anyone who disagrees with them. It is then used to characterize the 'disagreers' as dangerous to society, violent, and deserving of draconian enforcement methods. Saints preserve us from such leaders.

Jason Kenney himself is the

Jason Kenney himself is the Western Chief Disrupter. Casting about to find something -- anything -- to blame on Trudeau seems to be his modus operandi at present. He offers no solutions, but takes delight in harping on problems. What is his answer to Indigenous rights, in this case? You'd wait forever for an answer to that question. Classic politics of division.

I vote to give the Trans

I vote to give the Trans Mountain Pipeline to Jason Kenney.
I think this whole situation comes from a perceived bigotry from Trudeau that he somehow trivialized the native concerns for the planet by buying it in the first place.
The Costal Gas Link objection is a symptom of the failure to just let the oil industry die a natural death.