From Japan, a flight to evacuate Canadians from cruise ship is planned 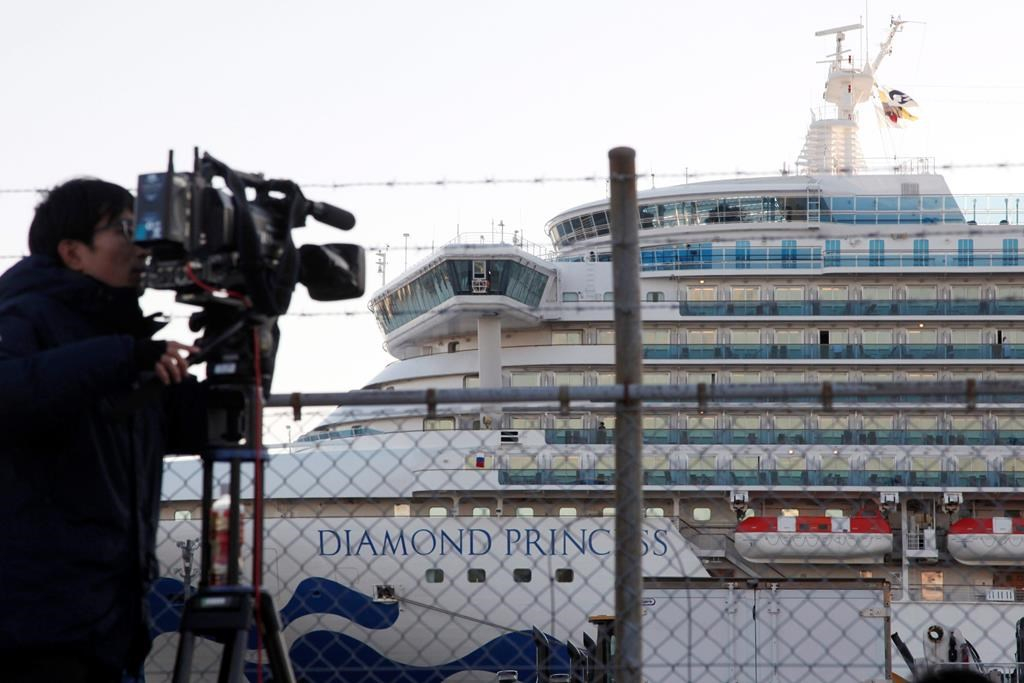 Canadians stranded on a quarantined cruise ship were told that a flight set to bring them home is "expected" to depart Tokyo Haneda Airport on Thursday amid an outbreak of the novel coronavirus.

Passengers will be informed of the "exact departure time approximately 24 hours before the flight," reads an email received by passengers aboard the Diamond Princess cruise ship docked at a port near Tokyo.

"It is important that you remain on the ship until you are instructed to board the assisted Canadian flight, even if you are cleared to leave because you have completed the ship quarantine," says the email received Tuesday evening local time from Global Affairs.

"Please note that if you leave the ship before you are instructed to do so, it will not be possible to board the assisted Canadian flight."

Should passengers choose not to return on the charter flight, they will need to complete the current quarantine being administered by Japan and follow the instructions of local authorities, it says.

Canadians seeking to return to home by commercial means will be subject to the Quarantine Act, in line with a determination to be made by the Public Health Agency of Canada, it says.

This could include a further quarantine of 14 days, it reads.

An email sent Monday evening said it took the government time to organize this evacuation because the flight departure from Lisbon was delayed by "several hours due to overflight clearance challenges."

On Tuesday, Global Affairs issued a statement saying: the plane had resumed its journey to Tokyo after "unforeseen technical issues in departing from Europe." No additional details were provided.

"It will land in Tokyo where passengers will be screened before boarding as planned. More information to follow as it becomes available," Global Affairs said.

As many as 255 Canadians are on the Diamond Princess, where some 3,500 passengers have been stuck for at least 10 days. So far, 355 people have been infected, including 15 from Canada.

The largest number of cases outside China is among passengers and crew of the Diamond Princess cruise ship. The Japanese Health Ministry has tested 1,723 people among the 3,700 initially on board, and 454 have tested positive.

The U.S. evacuated 338 American passengers early Monday, with most of them placed in a 14-day quarantine at military bases in California and Texas.

Global Affairs Canada said on Saturday that the aircraft will bring passengers from Japan to Canadian Forces Base Trenton in southern Ontario.

There they will be assessed and transported to the NAV Canada Training Institute in Cornwall, Ont., to undergo a further 14-day period of quarantine.

Before boarding in Japan, passengers will be screened for symptoms, it said adding those who exhibit symptoms of COVID-19 will not be permitted to board and will instead be transferred to the Japanese health system to receive appropriate care.

Experts have questioned if the close quarters have contributed to the virus' spread.

Lolita and Hans Wisener of Red Deer, Alta., who have so far not shown symptoms of the virus say they are looking forward to being on the plane.

"I feel better having gotten some news because it feels like we've just been sitting and waiting for two days," Lolita Wisener said.

"Things are moving even if it's slow but knowing helps. It looks like it's going to be another two days."

Another passenger, Trudy Clement, said she's a bit worried although neither she nor her husband have shown symptoms.

Her husband will be spending his birthday in quarantine on March 1, in Ontario.

"As long as we get out of here, it's fine. Home is always home."