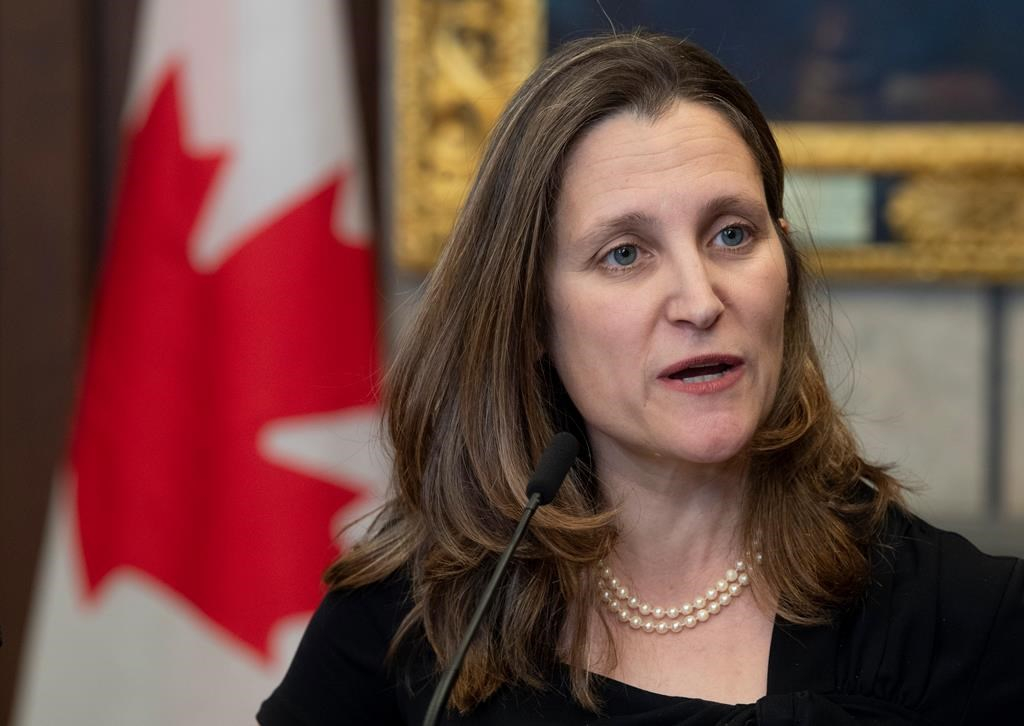 Deputy Prime Minister and Minister of Intergovernmental Affairs Chrystia Freeland speaks with the media before Question Period on Parliament Hill in Ottawa, on Tuesday, February 18, 2020. Photo by The Canadian Press/Adrian Wyld
Previous story
Next story

Freeland said the government wanted to limit study of the new deal, which replaces the quarter-century-old North American Free Trade Agreement, and get on with a vote to put it into effect.

Freeland said she was surprised that Conservatives wanted to extend committees' study of the agreement into March and was grateful to New Democrat MPs for supporting the government.

But the Conservative trade critic Randy Hoback said there is no circumstance under which his party would vote against ratifying the trade deal. He said the Tories simply wanted to hear from witnesses to give voice to people who are concerned about the deal, to make it stronger in the long term.

"We're just asking basic questions that Canadians are asking us. There's no silly buggery going on in the background. These are just fair questions that need to be answered before moving forward," he said in an interview.

"We needed to hear from those witnesses that were negatively impacted by this deal and we needed to have an idea from the Liberal party in how they are going to mitigate those consequences," Hoback added.

The partisan acrimony on the trade file came on a day when Prime Minister Justin Trudeau pointedly excluded Conservative Leader Andrew Scheer from a meeting of party leaders talking about blockades raised by Indigenous people and supporters over a pipeline project in B.C.

The blockades and the unresolved trade deal have economic consequences.

Both the United States and Mexico have formally ratified the new continental trade pact, which was reached after the Trump administration in Washington foisted a renegotiation on its two continental allies in 2017.

President Donald Trump repeatedly threatened to rip up NAFTA during the 13 months of acrimonious negotiations among the three countries.

Getting a new deal became the Liberal government's top priority because of Canada's massive economic dependence on access to the United States, its biggest trading partner.

Freeland has had cabinet responsibility for Canada-U.S. relations during that time as foreign affairs minister and now as deputy prime minister.

Freeland said Tuesday the Commons trade committee will end its hearings on Feb. 28, allowing the ratification to move forward. The Liberals needed the support of at least one other party to get their way, because they don't command a majority in the House of Commons.

"The Conservatives had sought to extend debate at committee on the new NAFTA beyond March 12. We think that that is too long, and would have created unnecessary needless and dangerous uncertainty in the Canadian economy," Freeland said.

"I leave it to the Conservatives to explain why they believe that partisan bickering is more important than a principled support of the national interest."

But Hoback said his party was not playing partisan politics by wanting further study, and that it will vote to support the deal.

"That's what created the problem in the previous NAFTA is when people were left out. They were the ones that elected Trump this last election, because they were left out."

"We know that we can't change the deal," Blaikie told reporters.

"That's why we focused on what we could change, which is how we get better deals in the future and we were glad to see openness on the part of the government to that."

What the Conservatives want

What the Conservatives want to foist onto the Liberals, is responsibility for the changes that were forced upon Canada by the US. It is silly bugger, and they know it. The Cons are getting more and more disappointing.