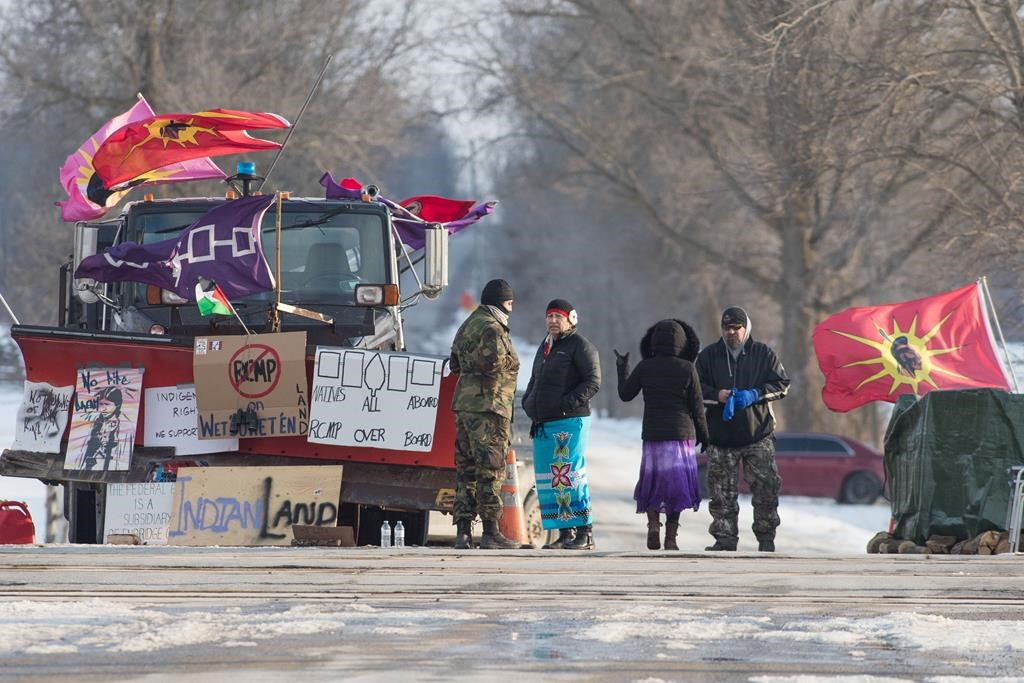 People talk at a rail blockade on the eleventh day of demonstration in Tyendinaga, near Belleville, Ont., on Sunday, Feb. 16, 2020. File photo by The Canadian Press/Lars Hagberg
Previous story
Next story

A small, mobile RCMP detachment in a remote area of British Columbia has become a bargaining chip in proposed talks that many hope could put an end to blockades that have disrupted rail and road traffic across the country.

The demonstrations are in support of Wet'suwet'en hereditary chiefs who oppose a natural gas pipeline through their territory and the federal minister in charge of Indigenous relations has proposed a meeting with the chiefs to diffuse the situation.

However, a hereditary chief representing one of 13 Wet'suwet'en house groups, said they won't meet with Carolyn Bennett and her B.C. counterpart Scott Fraser until the RCMP detachment is removed.

Chief Woos accuses the RCMP of acting as "bullies," and says all hereditary chiefs are in agreement.

RCMP say in a statement they are aware of the request and discussions are underway on next steps, while Indigenous Services Minister Marc Miller said during an emergency debate that "there is a clear path forward."

Saskatchewan Premier Scott Moe has called his own meeting, saying on Twitter that as chairman of the Council of the Federation he will convene a conference call with Canada's premiers.

Moe said the blockades have been up for almost two weeks and while the prime minister spoke in Parliament about the ongoing illegal activity "he offered no course of action to protect the economic interests of our nation."

Woos, who also goes by Frank Alec, said they'll start talking about meeting with politicians when the chiefs' message gets through to the RCMP.

The detachment is located off a forest service road where 28 people were arrested this month when RCMP enforced an injunction on behalf of Coastal GasLink, which is building a natural gas pipeline through the area.

"Pick up everything and go and do not return," Woos said.

While the RCMP have said their major operations in the region have concluded, they have also said the mobile unit will remain in place and they'll continue "patrols of the corridor to ensure everyone's safety."

Although 20 elected First Nations councils along the 670-kilometre path of the Coastal GasLink pipeline have signed agreements with the company, the Wet'suwet'en hereditary chiefs say the project has no authority without their consent.

Earlier Tuesday, Prime Minister Justin Trudeau called for patience, as he faced demands from the Opposition Conservatives to crack down on protesters.

Recognizing the crisis as "a critical moment for our country and for our future," the prime minister acknowledged that people on all sides are frustrated.

"What we are facing was not created overnight," Trudeau said. "It was not created because we have embarked upon a path of reconciliation recently in our history. It is because for too long in our history, for too many years, we failed to do so. Therefore, finding a solution will not be simple."

The situation is evolving hour by hour, he said, describing the de-escalation efforts as positive.

Let us all be generous

Let us all be generous Canadians of goodwill, and find a peaceful way forward that leads to constructive action.