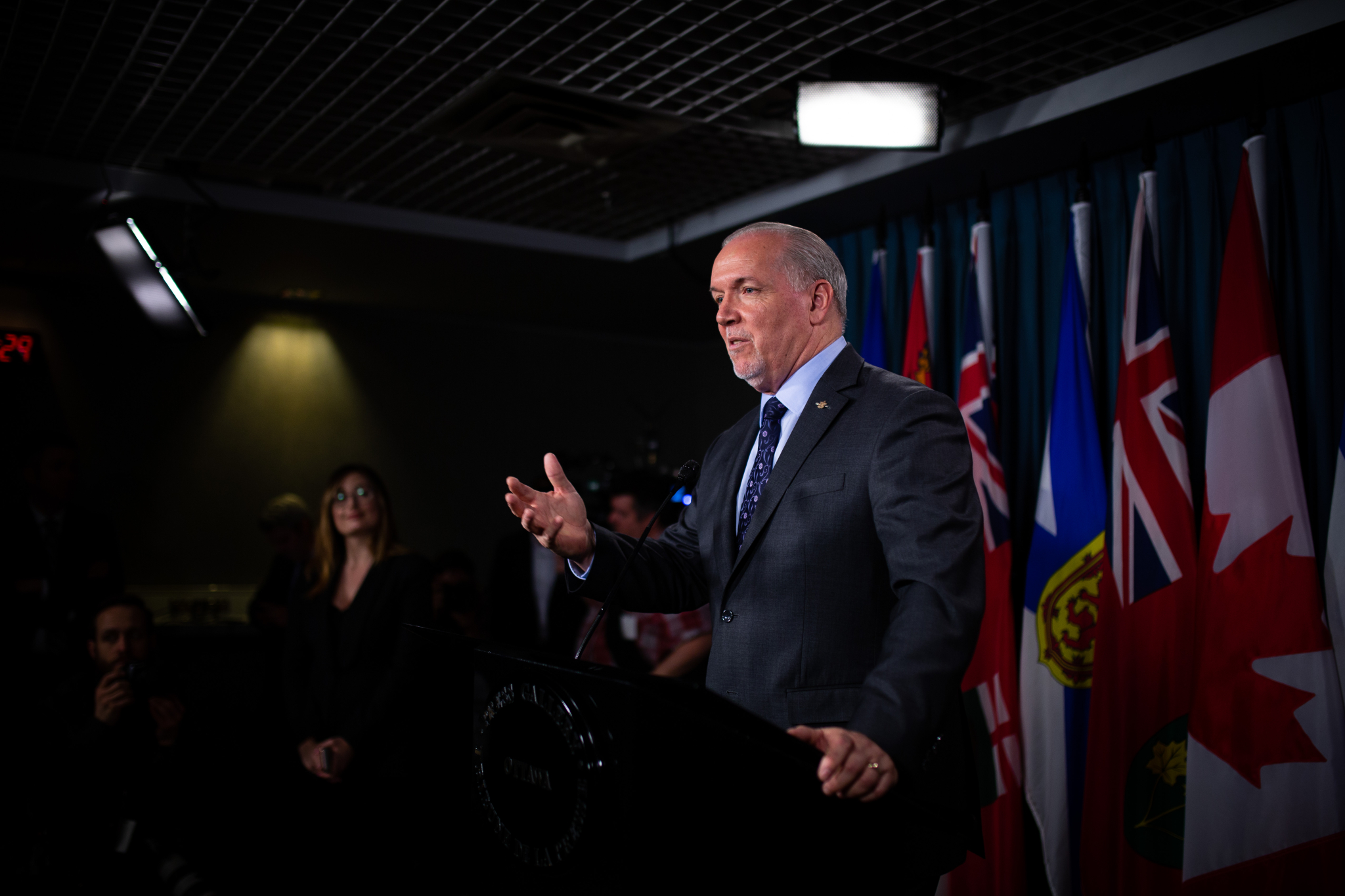 B.C. Premier John Horgan raised his voice over jeers and fist-banging recently in question period after members of the Opposition Liberals criticized his government's handling of the clash between Wet'suwet'en hereditary clan chiefs and a pipeline company.

Horgan told the legislature that the unresolved rights being asserted by the chiefs were around long before his government took power 2 1/2 years ago.

"These issues have been percolating for generations — generations," he said.

While 20 elected First Nations councils have signed agreements with Coastal GasLink over its natural gas pipeline, the clan chiefs say the pipeline has no authority to run 190 kilometres through their traditional territory without consent.

The conflict that began in a remote area of northern British Columbia has erupted across the country, with protests and rail blockades in solidarity with the clan chiefs. The chiefs claim that while elected councils administer smaller reserves, hereditary chiefs are the true authority over 22,000 square kilometres of land.

The provincial government has long struggled with how to handle land claims in the province — where most First Nations haven't signed treaties — and documents released under freedom of information show it has often taken an approach that prioritized creating "certainty" for natural resource projects to proceed, a researcher and a lawyer say.

In 1997, the Supreme Court of Canada recognized the existence of Aboriginal title as an exclusive and ancestral right to the land.

The Delgamuukw case was fought by Wet'suwet'en hereditary chiefs and their Gitxsan neighbours, but the ruling fell short of recognizing the boundaries of the territory to which their title applies. The judges found there was a defect in the pleadings and sent it back to trial, at the same time that they suggested goodwill negotiations could be a better way to resolve the questions it was being asked.

"What it did say was the province, acting on its own, doesn't have authority to extinguish Aboriginal title, that it continues to exist and that the Wet'suwet'en never ceded or otherwise gave up their title," said Kate Gunn, a lawyer with First Peoples Law.

"Although it hasn't been taken as such, it's an opportunity for the Crown to simply recognize the existence of that title."

First Peoples Law represents the Unist'ot'en, members of the Wet'suwet'en Nation, in an application for a judicial review that accuses the province of failing to consult them about an archeological mitigation plan after Indigenous artifacts were found at a Coastal GasLink construction site.

Rather than use the court decision as an opportunity to recognize Aboriginal title, researcher Shiri Pasternak said the government sought to protect industry from the ruling's implications.

"The provincial government was deeply shaken by the Delgamuukw decision as were the representatives of industry from across the province," said Pasternak, the research director at the Yellowhead Institute, a First Nation-led think tank.

Pasternak filed a freedom of information request for about 800 pages of documents that were released in 2018 as part of her research with Toronto's Ryerson University, where she is an associate professor of criminology.

"You can see in the documents they immediately rushed to their federal counterparts and co-ordinated a strategy for pushing Indigenous nations into the treaty process," said Pasternak, who recently co-wrote a story based on the documents that was published by The Narwhal magazine.

Some bureaucrats under Glen Clark's NDP government looked for a chance to make their argument in court. In a confidential email in 1998, a director with the Aboriginal affairs branch of the Forests Ministry suggested watching for the "right court challenge."

"This will be controversial, but it seems likely that Delgamuukw will spawn more litigation," wrote Doug Caul in an email released as part of the freedom of information request.

He said future litigation could help determine the scope of Aboriginal title.

"I am not suggesting we pick a fight but that we make sure we take advantage of potential litigation and maybe even initiate where we feel it could help us, instead of waiting and reacting. I am sure this suggestion will result in a strong reaction from others, I put it out there for some thought."

Caul, now a deputy minister in the Indigenous Relations Ministry, said in an emailed statement that Delgamuukw left many unanswered questions about the definition of Aboriginal title and who holds it.

The email quoting him contained a long list of ideas for brainstorming how to move forward, he said, and his long-standing view remains that government should answer those questions through negotiation and dialogue rather than the courts.

"I stand by my record on advancing reconciliation. In the past five years since I have been deputy minister, I have presided over significant progress in many areas — including the Declaration on the Rights of Indigenous Peoples Act, a modernized treaty policy, and meaningful new agreements with First Nations," Caul said.

Pasternak said the historic memos also show the province wrapping up Indigenous groups in interim agreements on the condition that they not take legal action or exercise their jurisdiction.

And representatives from forestry, ranching and other industry groups expressed concern about how Indigenous land rights could affect the economy.

"(Delgamuukw) has only created more uncertainty and we are very concerned by how governments will react to the court’s findings," Marlie Beets, then vice-president of the BC Council of Forest Industries, said in another 1998 one memo.

More than 20 years have passed since the Delgamuukw decision, but Pasternak said the issue of Indigenous land rights has yet to be resolved.

The treaty process has consistently been used to keep First Nations out of the courts, but neither is an ideal venue, she said.

"Indigenous people have been left between a rock and a hard place. There's no policy in place that recognizes their title in a meaningful way, yet litigation is an insurmountable barrier," she said.

The Tsilhqot'in won a court battle in 2014 recognizing their Aboriginal title in B.C.'s Interior, but it cost millions of dollars and took more than 20 years, she said.

With the obligation on First Nations to assert their title claims, it makes sense that some, like the Wet'suwet'en, are choosing to do so through direct action as they try to prevent Coastal GasLink from building its pipeline through their traditional territory.

"The onus remains on First Nations and that cost is untenable for most people," she said.

Gunn said that from her perspective, the provincial and federal governments have tried to maintain the status quo in the decades since the ruling by denying land rights until a First Nation challenges them.

Conflicts could be diminished if negotiations began with the recognition of Aboriginal title rather than discussion about whether it exists, she said.

The B.C. government has been in talks with the Wet'suwet'en for a year on a joint goal of "affirming" Aboriginal title with no real agreement reached.

B.C. Indigenous Relations and Reconciliation Minister Scott Fraser said in a recent interview that the talks aren't specific to any project like Coastal GasLink's natural gas pipeline, but they could have implications in the future.

"It's a much larger issue than a particular project, we all agreed it would be a separate process," he said.

"That being said, as we dig deeper into the conflict here, the rights and title issues come up over and over again, and that's still an outstanding issue that we haven't been able to address."

Recogniizng that if we expect

Recogniizng that if we expect a different outcome from doing things the same way, that doesn't happen, how about changing the way things are done?!
Part of updating our approach involves a view of the big picture, as alluded to in this article. Now that we have finally come to admit, we need to stop messing up Mother Earth. This means taking care of her, and we are beginning to understand that this is generally the approach used by first nations people. They can point to centuries of careful habitation on the planet for proof of how well this works.
It will be far more beneficial for everyone to replace the concept of ownership - title, in settler law, which gives the owner the right to do whatever he wishes with the property, including destroy it - with communal care for the land, which obliges all inhabitants to act in the best interests of everyone.
Enshrining a "Rights of Mother Earth" concept into Canadian governance will surely help.