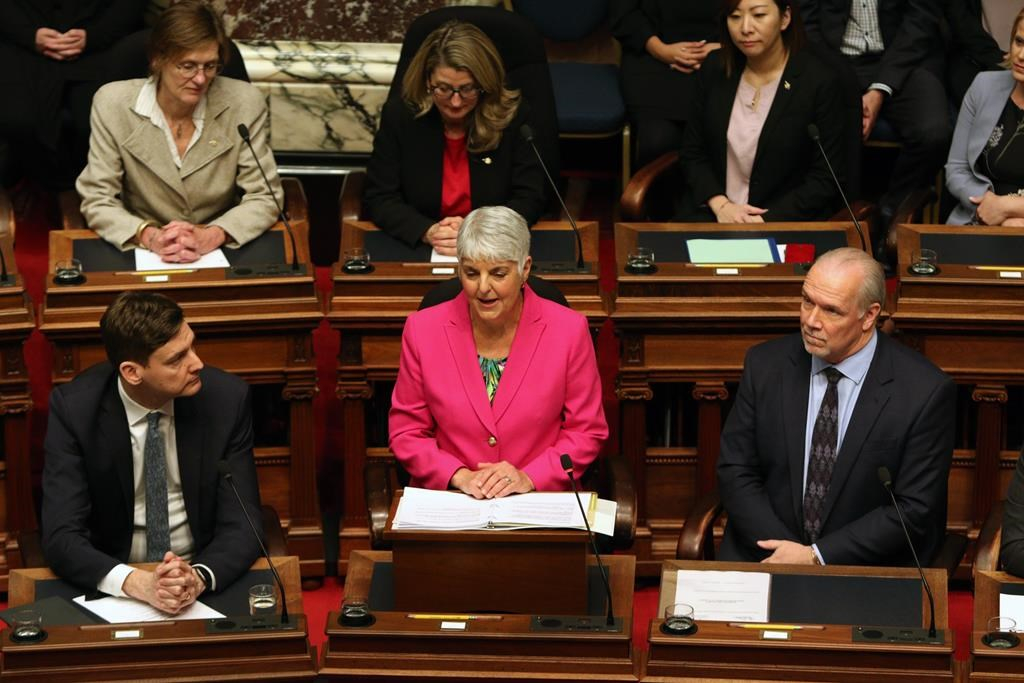 Attorney General David Eby and Premier John Horgan look on as Minister of Finance Carole James delivers the budget speech from the legislative assembly at B.C. Legislature in Victoria, B.C., on Feb. 18, 2020. Photo by The Canadian Press/Chad Hipolito
Previous story
Next story

Top income earners and pop drinkers were hit with new taxes in Tuesday's B.C. budget, which continues the government's focus on capital spending for schools, hospitals and transit.

Finance Minister Carole James is introducing a new 20.5 per cent tax bracket that will cover the top one per cent of income earners in B.C., or those earning more than $220,000 annually.

James said the government will also start charging the provincial sales tax of seven per cent on sweetened carbonated drinks to help address the health and economic costs of the beverages.

As well, the government is bringing in a new grant program this fall for post-secondary school students that will provide up to $4,000 a year to offset tuition fees, with as many as 40,000 people being eligible for the $24-million program.

James said a record $22.9 billion will be spent on capital projects over the next three years including money for the new St. Paul's Hospital in Vancouver, student housing and schools for kids in kindergarten to Grade 12.

The budget forecasts three successive surpluses with the government finishing 2020-21 $227 million in the black.

James said the New Democrat government's third budget represents a balanced plan that continues its goals of controlling costs for families while giving everybody the opportunity to benefit from the province's growing economy.

"We had a plan when we were elected government to make life more affordable for families," James said. "That's really the focus of this budget."

"We're asking those at the top who benefit most from our economy to contribute a little bit more," she said.

The Business Council of British Columbia was critical of the government's new tax bracket, which it says pushes the federal-provincial personal tax rate above 50 per cent.

"Higher personal taxes on a small slice of the population will generate less incremental revenue than the government is forecasting, and undermine efforts to foster a more innovative, entrepreneurial economy," Jock Finlayson, the council's executive vice-president, said in a statement.

James said health officials and an all-party finance committee of the legislature called for a so-called sugar tax on drinks. The budget forecasts $27 million in revenue in 2020-21 from the tax, which goes into effect July 1.

"Research shows that teens between the ages of 14 and 18 are the top consumers of pop," James said in her budget speech.

"This is about keeping young people healthy while taking in a bit of revenue to continue to pay for enhanced health care services for everyone."

The B.C. Liberals said with gas prices up and insurance rates at "sky-high" levels, the NDP led by Premier John Horgan isn't keeping its promise to make life more affordable.

"British Columbians aren't getting ahead and life is less affordable than ever before," said Stephanie Cadieux, one of the party's finance critics. "With 22 new or increased NDP taxes and no plan for economic growth, families across the province are going to keep feeling the squeeze under John Horgan."

James said the new BC Access Grant program for post-secondary students will be ready for the fall semester in September.

"For the first time, provincial grants will be available to part-time students and students enrolled in programs of less than two years," James said. "This will help people land good-paying jobs in high-demand fields like early childhood education, health care and the skilled trades."

She said there will be more than 800,000 job openings in health care, early childhood education, skilled trades and technology over the next decade, and more than 75 per cent of the jobs will require some post-secondary education or training.

The Canadian Centre for Policy Alternatives encouraged the government to do more on social issues facing the province, particularly in areas like poverty reduction and increasing access to child care.

"This is a very cautious budget," Iglika Ivanova, the centre's senior economist, said in a news release. "We can afford to do more."

Interim Green Leader Adam Olsen said the budget makes incremental investments in areas where the party shares priorities with the minority NDP government, which it has supported to keep the New Democrats in power.

Olsen said the Greens like the grant for post-secondary students, is pleased to see funding maintained for the government's key environmental program CleanBC, as well as improving access to affordable early childhood education.

"However, it isn't enough to make life more affordable," he said in a news release. "Now is the time to go all-in on transitioning to a clean economy that has equity and sustainability at its core."

James said the financial bleeding at the Crown-owned Insurance Corp. of British Columbia is expected to be stemmed by the end of 2020-21, after losses of more than $2 billion over the past three years. The 2019-20 budget forecasts a loss of $91 million.

The government recently announced it will move to a no-fault system that will cut insurance rates by 20 per cent.

This report by The Canadian Press was first published on Feb. 18, 2020.

In terms of social programs and good management of the economy, I still think the NDP is our best bet. Too bad they can't get ahead of the curve on extractivist projects designed to cost taxpayers.........and find a way to get big corporations and their lobbyists out of the back rooms of government. Site C was and still is a very bad idea.........why did Horgan renege on his pre election promise, and once in office, go ahead with it???