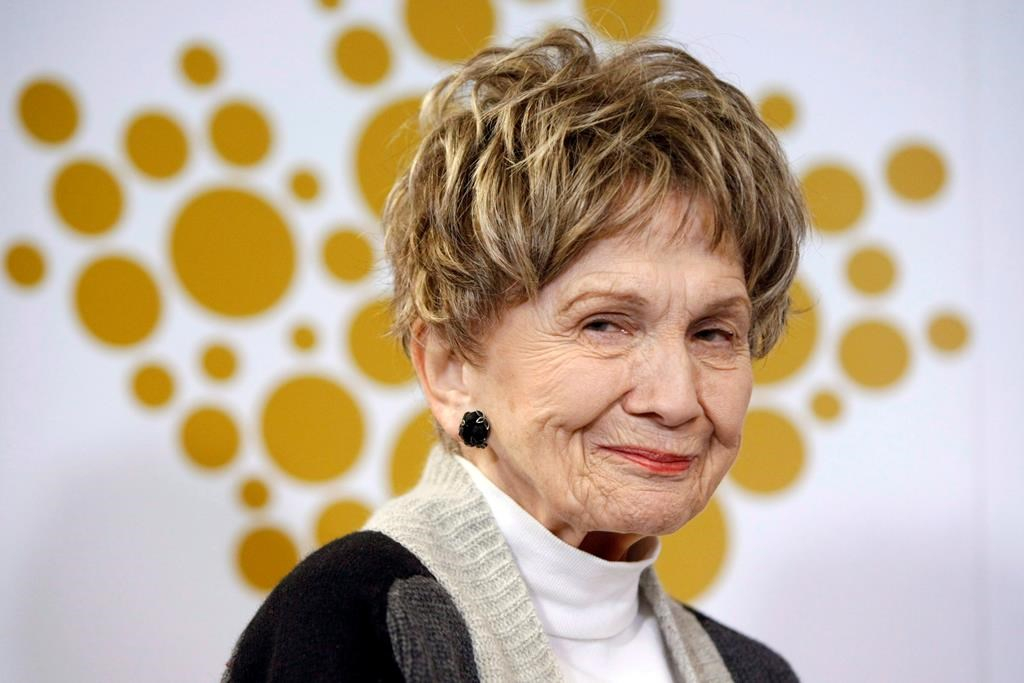 Alice Munro attends a ceremony held by the Royal Canadian Mint to celebrate her win where they unveiled a 99.99% pure silver five-dollar coin at the Great Victoria Public Library in Victoria, B.C., on Mar. 24, 2014. File photo by The Canadian Press
Previous story
Next story

Canadian author Alice Munro and dozens of other Nobel Prize winners around the world have joined the heated opposition facing a massive oilsands project in northern Alberta, decrying the proposed development as "a disgrace."

Munro, Canadian biologist Jack W. Szostak and 40 other global winners from various fields signed a letter addressed to Prime Minister Justin Trudeau and Deputy Prime Minister Chrystia Freeland urging them to deny the Teck Resources Ltd. plan, as well as any expansion of the fossil-fuel sector.

"The mere fact that they warrant debate in Canada should be seen as a disgrace," states the letter, which appeared on the Guardian's website Friday.

"They are wholly incompatible with your government's recent commitment to net-zero greenhouse-gas emissions by 2050. And with clear infringements on First Nations rights, such projects fly in the face of rhetoric and purported efforts towards reconciliation."

The signatories call fossil-fuel projects "an affront to our state of climate emergency," and say the "importance of leadership in the coming few years cannot be understated."

The project is expected to produce about four million tonnes of greenhouse gas emissions per year over 40 years.

Federal Environment and Climate Change Minister Jonathan Wilkinson responded to the letter by saying Canada needs to be the cleanest source of resources for global markets as it transitions to a low carbon future.

"Cabinet will be considering the Teck Frontier project based on its merits," he said in an email.

"We will take into account all circumstances and information available to ensure this is the best Canada can offer the world in terms of sustainable and responsible development."

Canadian author Alice Munro and dozens of other Nobel Prize winners around the world have joined the heated opposition facing a massive oilsands project in northern Alberta, decrying the proposed development as "a disgrace."

Those in favour of the proposal say it will create thousands of jobs and bolster Alberta's struggling economy. Alberta Premier Jason Kenney said Friday it would create 7,500 jobs and $70 billion of government revenue.

He also touted "cutting-edge technology" that would allow the Vancouver-based miner to produce oil with half the carbon emissions of an average barrel produced in North America.

Kenney told reporters in Calgary that he suspected the signatories were presented with a distorted view of the Frontier project.

"Many interest groups have been misrepresenting the Canadian oilsands as being the equivalent of thermal coal for example, which is manifestly ridiculous. It is counterfactual," said Kenney.

"Our challenge ... is to show the world a path forward about how we can extract energy with a shrinking environmental and carbon footprint. That's exactly what we'll do."

Kenney called Teck mines "one of the most progressive mining companies in the world" noting its recent commitment to a net-zero carbon plan by 2050.

Meanwhile, the company itself said it was committed to fostering a low-carbon economy.

Kenney also said the project was supported by 14 nearby First Nations and Metis communities and suggested the expected benefits would directly improve the lives of Indigenous people.

"We embrace the imperative of reconciliation. Reconciliation first and foremost means giving Aboriginal people a way out of poverty," he said.

Nevertheless, opposition has been fierce.

Critics have raised questions about how the mammoth dig would impact woodland caribou, old-growth forests, and waterfowl habitat.

And in public letters sent last week to the federal government and to other chiefs, Athabasca Chipewyan Chief Allan Adam said he was worried that Alberta's failure to consult and take meaningful action on environmental concerns could jeopardize the project.

Opposition is strong even among Trudeau's own Liberal caucus, where many Liberal MPs have openly campaigned against approval and consider it antithetical to Trudeau's pledge to combat climate change.

Hereditary chiefs of the Wet'suwet'en Nation oppose the Coastal GasLink natural gas pipeline and have blocked access to the work site, while Wet'suwet'en supporters have held protests on rail lines across the country.

After two weeks, Trudeau said Friday the barricades must come down.

When we hear this promise of

When we hear this promise of "zero-carbon by 2050" from Teck, are their hands visible or are their fingers crossed behind their backs — how well can these climate-busting profiteers be trusted??

Approve this project Mr. Trudeau and Mr. Wilkinson, and we will all know, as Canadians, that you don't give a fig about the future of our children, or of children anywhere. We are in the final decade to turn things around. There is no room in that decade to set off another carbon bomb, without sealing our kids' doom, or, if we're lucky, and other countries value the input of experts over the input of the cravenly self-interested and wilfully ignorant, we'll only seal our economy's doom.

An approval for this project would be an appalling betrayal of Canadians, and by Canadians.