Protests spring up, even after Trudeau orders blockades torn down 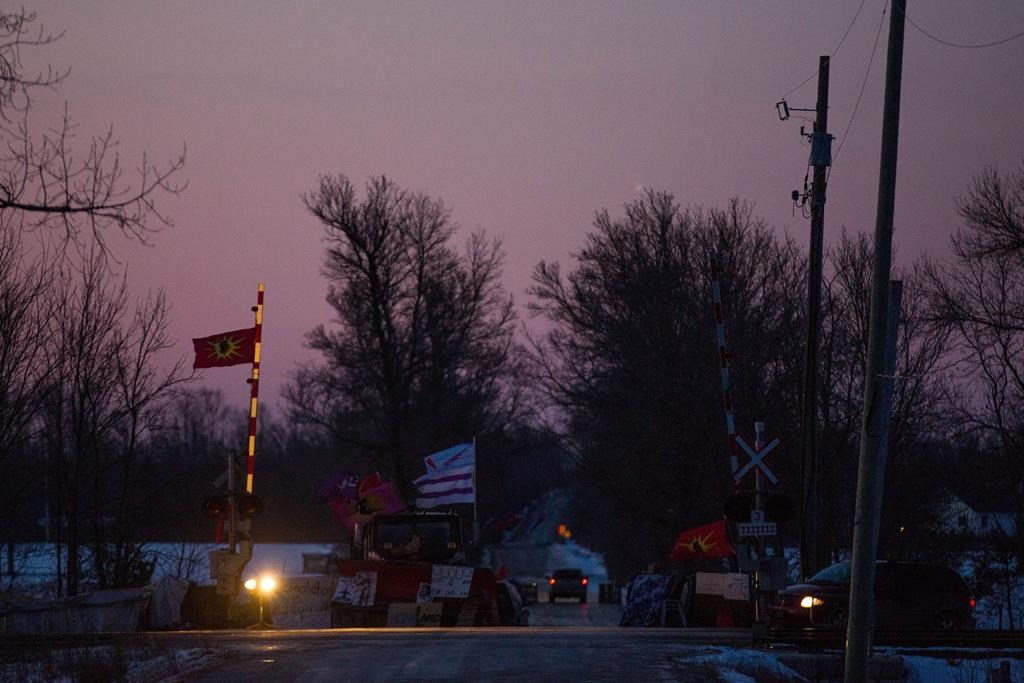 Blocked train tracks can be seen during dawn in Tyendinaga, near Belleville, Ontario, on Saturday, Feb. 22, 2020. Photo by The Canadian Press/Lars Hagberg
Previous story
Next story

More protests in solidarity with Wet'suwet'en hereditary chiefs sprung up on Saturday, a day after Prime Minister Justin Trudeau pivoted to take a sterner tone with Indigenous leaders he blames for halting train service across much of Canada.

Crowds of protesters rallied at the Ontario legislature in Toronto, carrying signs that called for RCMP to leave Wet'suwet'en land and for the federal government to respect Indigenous sovereignty. Another rail-line protest sprung up in Saskatoon.

Local police said they were monitoring the protest along the railway tracks, and a statement from the office of Saskatchewan Premier Scott Moe said a train was allowed to pass through the protest area as scheduled.

Moe's office said the protest must remain lawful and that transport routes cannot be disrupted by illegal blockades.

Trudeau said Friday the blockades must come down and said injunctions to clear the rail lines must be enforced. He pointed the finger at Indigenous leadership, who he said have not been receptive to his government's attempts at negotiation.

The barricades, including one on Tyendinaga Mohawk Territory in eastern Ontario, are in response to a move by the RCMP to clear protesters who had been blocking access to a pipeline worksite on Wet'suwet'en territory in northern British Columbia.

Supporters who gathered near the Ontario blockade said they were disheartened by Trudeau's strong words against the protests — with one saying it was Trudeau's shift in tone that drove her to make the 40-kilometre trek to the rail line.

"I've been meaning to come, but with what he said yesterday, I just said, OK I'm going," said Sarah Dear, who brought small gifts from Mexico she said were symbolic for Indigenous communities there.

"I voted for Trudeau back in 2015 because he promised meaningful reconciliation, and as far as I'm concerned he's broken that promise," she said.

Cory Chalk, who lives on Tyendinaga Mohawk Territory but isn't Indigenous, said he, too, felt Trudeau was striking the wrong tone and making the wrong moves.

"He's not talking to the right people still — trying to lay down the hammer is not going to work," he said. "This is a whole generation standing up against a lot of things that have been done wrong."

Saskatoon protest springs up, even after Trudeau orders blockades torn down

He said if police tried to dismantle the blockade with force, he thinks they would be met with force back.

Increased attention is on Canadian police forces now that Trudeau has ordered the enforcement of anti-blockade injunctions.

A Wet'suwet'en hereditary chief said protesters won't tear down the barricades themselves unless, and until, the Mounties get off their traditional territory and Coastal GasLink halts construction on the natural-gas pipeline that crosses their land.

Chief Woos of the Grizzly House said Indigenous leadership will only begin negotiating with the Canadian government under those same conditions. But Trudeau said injunctions ordering the rail lines be cleared must be obeyed and the law must be enforced.

On Thursday, the RCMP in B.C. sent a letter to the traditional leaders of the Wet'suwet'en Nation, telling them the force intends to move its officers off the access road and station them instead in the nearby town of Houston, but Woos said a letter isn't good enough.

Protesters who'd been blockading a CN Rail line in St-Lambert, Que., south of Montreal since Wednesday cleared out Friday night shortly after riot police arrived on scene ready to enforce an injunction to clear the tracks. But the blockade of a critical east-west rail line on Tyendinaga territory remains in place — and more protests are planned for March 20 along the borders of Manitoba.

Ontario Provincial Police have said they don't intend to break up the Tyendinaga protest in the immediate future.

But Trudeau said the inconvenience to Canadians has gone on long enough, given that the blockades have halted rail lines for weeks.

"Let us be clear: all Canadians are paying the price. Some people can't get to work, others have lost their jobs," he told a news conference Friday. "Essential goods … cannot get where they need to go."

This report by The Canadian Press was first published Feb. 22, 2020.

rcmp out and stop harassment.

rcmp out and stop harassment. How hard is that as a gesture????? Apparently too hard .

They don't understand yet that you can't use force on 40% of the population and arrest your way out of an impasse. "or what Justin?" is the stage we are at. and Justin can't win at this point

Ask any teacher what happens if you aren't just and don't give a path out of a stand off. If you reach the "class detention"stage you have lost control and you are DONE!!!

The Prime Minister has gotten

The Prime Minister has gotten away for years with treating his office as though it were a role in a play and his words mere dialogue in a fictional Drama. Like other political parties who have hired trained actors to "lead" them, the Liberal Party of Canada is facing the uncomfortable reality that the public is not merely an audience. There are no Directors' workshopping notes that will help them with this. If "All the world's a stage" then ALL the men and women are merely players on it, not just the rich and powerful.